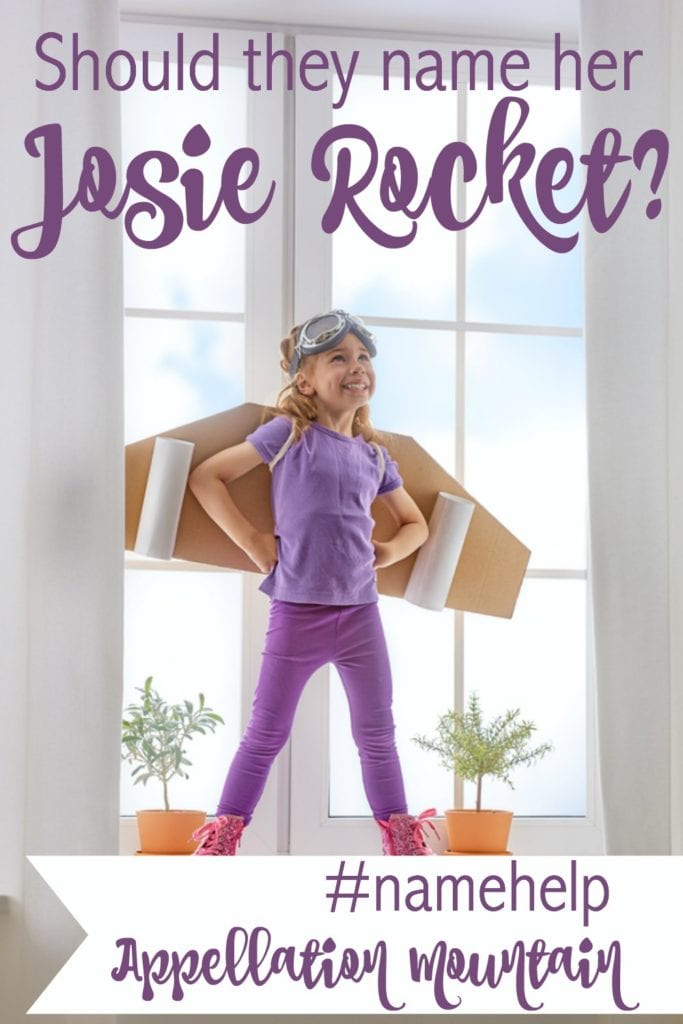 My husband and I have always loved the name Josie for a girl. Now that we’re having one, we need a little more help.

We don’t like Josephine but I do like Joseline , pronounced Jo-se-leen. However, I know people would say it like Jocelyn so we may just go with Josie. Do you think the mispronunciation is worth the longer name to use if she wishes?

Our other dilemma is a middle name. We both love Josie Rocket. A rocket is the symbol of the record label that brought us together.

Personally, I am a little worried about people’s responses, even though I like it. I do like word names, though, and have considered:

Congratulations on your daughter! It can be tough when you almost-kinda-sorta have the perfect name chosen, but you’re not quite there.

It sounds like there are two questions. First, to use a formal name for Josie, or to just go with Josie on your daughter’s birth certificate.

Let’s have a quick poll, because I tend to favor formal names – but I don’t think it’s necessary in this case:

As for the question of which formal name. I expected there to be tons of options, but when I really mulled it over, there aren’t as many as I expected. Josephe seems confusing. Joanna and Jolene take away the ‘s’ sound and making Josie feel like a stretch. Josette is kind of fabulous, but I’m not sure it’s quite your style. Josefina and Joselina are a little bit frillier than the other names on your list.

I think that leaves Joseline, which I have no trouble spelling and pronouncing – though I expect you’ll run into the occasional headache.

While I tend to favor formal names, I think this might be one of those moments when it’s best to skip it. You love Josie – and agree on Josie. It sounds like that’s not the case with any of the formal versions of the name.

So despite my usual bias towards formal names, I’d vote for just Josie.

Now, on to the really rich part of this post – to use a bold middle name, or to play it safe?

Let’s take a look at your options. I’ll add a few of my ideas into the mix, too:

Josie Elise, Josie Elle, or something other form of Elaine – All good options, any of which would make a solid name for a daughter. And yet, my sense is that you would prefer to choose a bolder middle name. There are plenty of good reasons to do this, and with a familiar first name like Josie, I think you’re free to be really bold.

Josie Laine – Before we get to the bold, here’s one that’s sort of in between. Drop the ‘E’ from Elaine, and you have the sleek, modern, but not too out there Laine. Safe, but not quite conventional.

Josie Liberty – If you like the idea of honoring your home state but hesitate to use the Latin, the English form has some history as a girl’s given name. Josie Free or Josie Freedom are options, too, but they’re almost as out there as Liberi while moving farther from the original inspiration, so I don’t know that there’s any point in choosing one of those over Liberi – unless you love the sound. 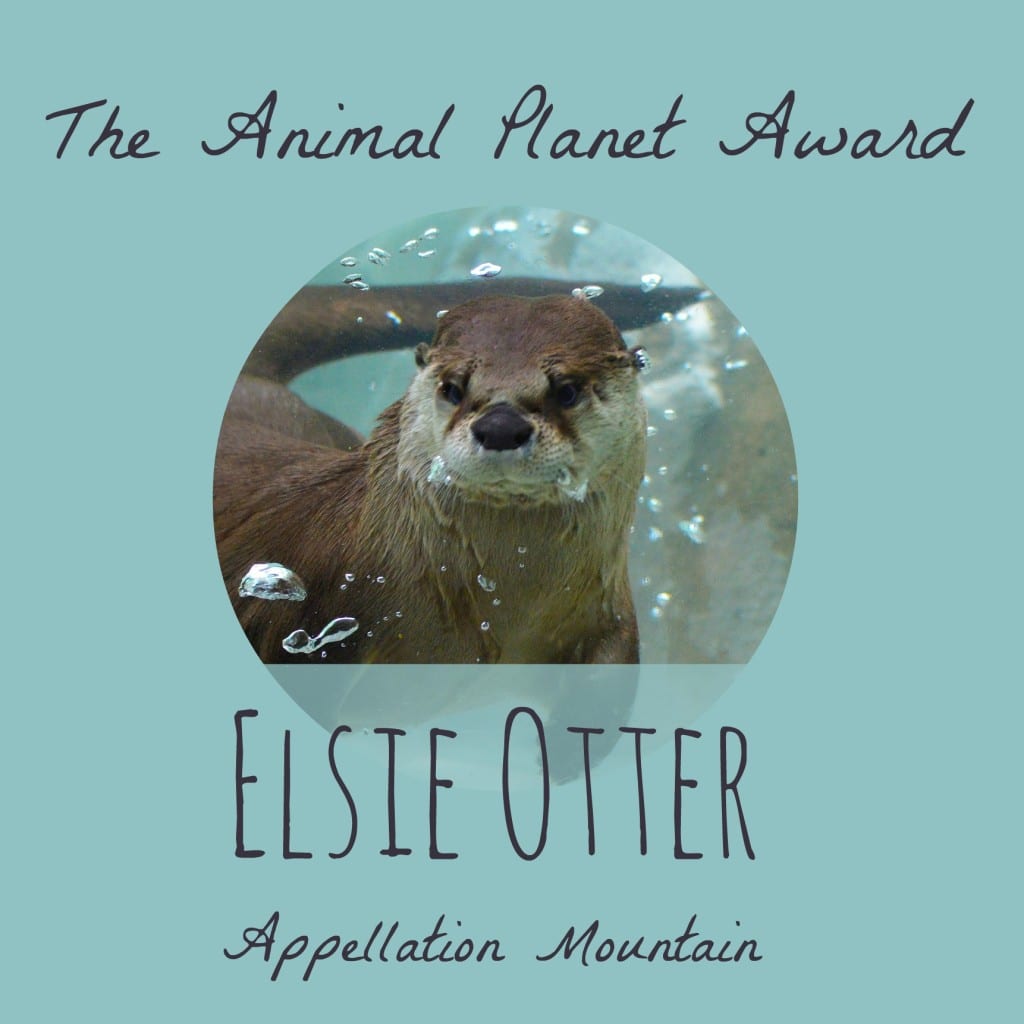 Josie Coyote – Now, let’s look at the bold choices! I don’t love singsongy sound of Josie Coyote. When I say it, the ‘o’ sounds make it feel more like a name for a fictional character than a real girl. I wouldn’t say this rules it out – if Zooey Deschanel can have Elsie Otter, you could have Josie Coyote. But I don’t think it’s the best option on the list.

Josie Liberi – I really love this one. I think the rhythm works beautifully. It’s a nod to your heritage, but it’s not as obvious as passing down your name. I suppose you could also name her Josie West, or find another name that refers to your home. But Josie Liberi is just plain genius. 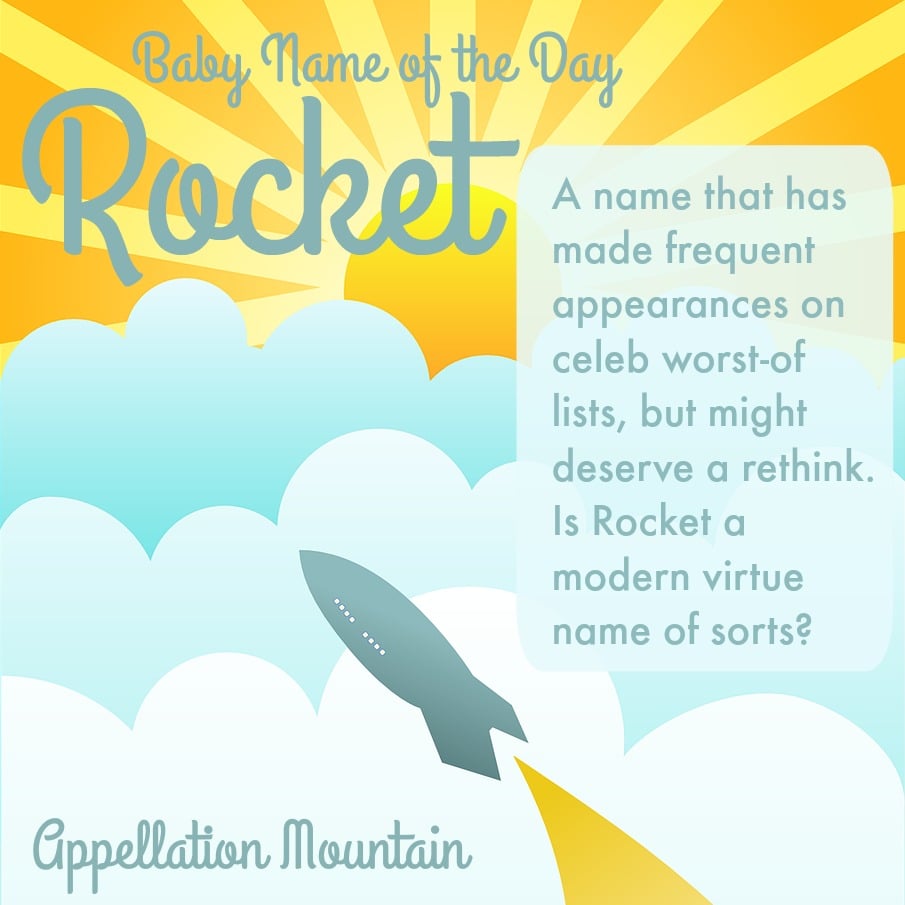 Josie Rocket – And yet, I’m inclined to encourage you to use Josie Rocket. It has to do with the story of how you met, then it’s even better. And many of the ideas that Pharrell expressed about the name Rocket – how it relates to achievement – make the name feel more like a modern virtue choice than anything else. Yes, it’s a cool name. But it also sounds like a name that feels right to you – and that, more than anything, is what matters.

Readers, do you agree that Josie Rocket is the go-to name for their family? Or would you suggest something different – another middle, or maybe another formal name for Josephine?