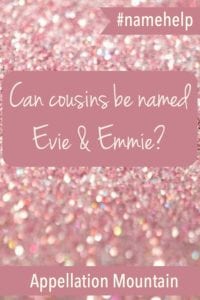 Update: They stuck with Emmeline Jean! Thanks to everyone for their input.

My husband and I are expecting our second child in June. Our son is named Asa Bear, and goes by all variations of first and middle.

We don’t know the sex of our second baby yet, but have picked two perfect names – Forest Jude or Emmeline Jean (nn Emmie). My husband especially loves the name Emmie and I love seeing him say it with such obvious affection for a possible daughter. I love that Emmeline has an elegant, old school feel and is recognizable without being close to the top 100 (a personal naming rule of my own).

The problem? My sister will have a baby girl in January and is naming her Evangeline nn Evie. Both names would be pronounced line as in bovine. We live twelve hours apart and see each other maximum three times a year, but I’m still worried it’s too close. My husband disagrees and thinks cousins named Evie and Emmie that close in age is “adorable”.

Should we use a name that we love and have had picked for several years, with the misfortune to be pregnant a mere six months too late? If not, should we consider an alternative given name for Emmie or find another name altogether?

I am heartbroken at the thought of giving up a name that we love so much, but maybe there is a good alternative that we could learn to love.

The short answer: you should use the name you love. Yes, even if it causes the occasional moment of confusion at a family reunion. The names might be a little close for siblings, but for cousins? Not at all.

But that’s not a very satisfying answer, so let’s dig in a little deeper.

Not so long ago, cousins routinely shared the same name, even when they lived in the same tiny town or on the same city block. Maybe they were both named for grandpa Bill, or maybe both parents just plain loved the name Mary. Families found ways around this, some graceful – one girl is Mary Anne while the other is Mae – and others less satisfying, like Big Bill and Little Bill. But no one thought that sharing names – even the identical name – was a problem.

In many respects, families have not changed. But our culture has shifted. Parents often prefer that their child’s name be unique, at least within their circle of friends and close family. That poses a problem, because we’re also unwilling to choose really unusual names. Yes to Vera and Eden, but Perpetua or Cayenne? Maybe not. And so our list of possibilities is winnowed with every passing year, because we used to work with that nice accountant who had granddaughters called Phoebe and Ember, or there’s that family at church with a Genevieve.

At these moments, we can go too far. Much too far! Because, after all, our close family members and friends often share our same taste in music and movies. We read the same books, travel to the same vacation destinations. It’s reasonable to imagine we’d like the same kinds of names. No surprise when Jake’s cousin is Nate, or when former college roommates both name their daughters Ava.

It’s worth noting that this might not be a problem at all. Asa Bear might end up big brother to Forrest Jude – a handsome and distinctive name.

But if it’s a girl, I’d still use Emmeline “Emmie” Jean because:

About that last point: lots of girls will have similar names in their generation. Evie will go to school with girls named Evelyn and Ava. Emmie will probably know a few girls called Emma or Emerson or Millie. In other words, if you went out of your way to find a new name that was less like Evie, there’s a good chance your daughter would still share her name – at least a little bit – with other girls her age.

Stick with your favorite girl’s name. And I give you permission to shrug if anyone complains that your daughter and niece have names that are similar. If families can make Seniors and Juniors work, there’s no reason why Emmie and Evie can’t occasionally enjoy their close-in-age cousin with a name that is – I’ll agree with your husband here! – sweetly similar.

Readers, what say you? Are Emmie and Evie so close that they should reconsider their name choice?