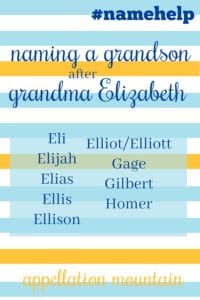 We lost my mom just a few weeks before I found out I was pregnant. This would be her first grandchild. My husband agreed that if it was a girl, we’d name her Elizabeth, after mom.

Except it’s a boy.

Which is completely great!

But I still want to name my son after my mom. Others have said we should save Elizabeth for a girl, but that feels like it’s missing the point, if that makes sense.

Is there a boy version of Elizabeth?

I’m so sorry for your loss! And I think it makes all the sense in the world that you want to name this baby, at this time, after your mother. It’s more than an honor name. It’s about a moment in your life as a family, and a way to connect your son to his grandmother.

And yet, it’s not easy to find a masculine version of Elizabeth. The majority of names with history tend to offer both masculine and feminine forms, even if some are fairly obscure. But Elizabeth? I hate to admit it, but there’s nothing.

Or is there? Elizabeth’s El refers to God in Hebrew. The name means God is my oath. Dozens of other names share that first element.

That makes me think that many El- names for boys would work beautifully:

Eli – An Old Testament name, but with a slightly different origin. It’s Hebrew, but means ascension. While Eli isn’t a masculine form of Elizabeth, it shares the first three letters, which seems quite close. It currently ranks #54.

Elijah – Another Old Testament name, Elijah means “my God is Yahweh.” It’s quite current today, a Top 20 favorite since 2010. I think it might be the closest name to Elizabeth in many ways – the length, the shared first syllable, even the meaning.

Elias – Elias is simply the Greek form of Elijah, but slightly less common, at #78.

Or maybe something that feels less Biblical, and more modern? Though all three of these are related to Elijah.

Ellis – At #312, Ellis is fairly popular for boys, but not nearly as common as the first three names. In many cases, it started out as a surname derived from Elijah. It sounds like the first two syllables of Elizabeth, which puts it near the top of my list.

Ellison – Take Ellis and add ‘son’ and you’ll have yet another surname option. It’s more popular for girls than boys at the moment. (In 2017, 268 girls were named Ellison, versus 101 boys.) Still, I think it works well for a son.

Elliot/Elliott – Yet another surname related to Elijah and friends, Elliott with two ‘t’s is almost exactly as popular as Elliot with one. It’s a very current choice, and I think it honors an Elizabeth nicely.

Those are the obvious choices, based on a mix of sound and origin.

I looked for names that share Elizabeth’s meaning – words like pledge, oath, and vow. I found just a few:

Gage – A modern favorite, it can mean to measure or to pledge.

These feel like more of a stretch, I think.

Speaking of stretching, is there another way to name a son after your mom? Her surname or middle name could be options. A nickname or something you associate strongly with her might provide inspiration, too.

Overall, I keep coming back to Ellis. It shares a name element with Elizabeth, and it sounds like the first two syllables of the name. That makes it a clear honor name, while still masculine.

Readers, what have I missed? Are there other masculine spins on Elizabeth Ali should consider?