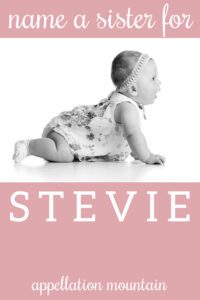 We have a 3 year old daughter named Stevie Elizabeth. We chose her name for lots of reasons, but mostly because we just loved it.

I do like lots of “boy” names for girls – Billie, Charlie, maybe Frankie. But I don’t like them with Stevie’s name. It’s like it’s less special if they’re too much of a set.

My husband’s favorite name for Stevie was Sloane, and he likes it for this baby, too. I’m maybe warming up to it, but I’m not convinced Stevie and Sloane sound like sisters.

Another name on the maybe list is Harlow, but maybe it’s a little trendy/common? There’s a Harlow in our friends group. (But not so close that it would be weird to use.)

Our last name is Richard-plus-son.

Please read on for my response and thank you for sharing your thoughtful insights in the comments.

You’re experiencing one of those classic second-child dilemmas. Even when your firstborn’s name is exactly right, duplicating it too closely for her sibling would be all wrong.

And yet, your style seems clear. Neither you or your husband seem likely to put Arabella or Magdalena on your short lists anytime soon.

It makes me think that you’re already on the right track with surname-style names like Sloane and Harlow.

I say they do.

Stevie is a little newer, an up-and-comer following Charlie (and Sadie and such) up the popularity charts. But neither is wildly common. And they’re both names with history and roots that feel especially at-home in the 2020s. They’re tailored, and while they’re both unisex, there’s no question they’re both currently far more popular for girls than boys.

Trendy is in the eye of the beholder.

Harlow has been trending. It debuted in the US in 2009, making it a relatively novel name. And Harlow has ranked in the 300s since 2017. Again, that marks it as a relative newcomer. But it’s a well-established surname, and it’s not rocketing up the charts, either. So while it’s certainly current, I don’t think it’s necessarily too popular or fleeting.

Still, I think you have lots of good options. Let’s consider some fresh ideas!

A SISTER FOR STEVIE

A modern nature name with a sparky image.

The tiniest tweak on Harlow. And yet, Marlowe feels a little less expected. Also spelled Marlo, in which case it’s more of an obscure Mary/Margaret nickname.

A true unisex name, popular for girls and boys alike.

A cheerful, upbeat nature name that stands up to the unforgettable sounds of Stevie.

Originally a masculine French name, Remi and Remy are trending for girls in the US. Remi-with-an-i ranks higher for our daughters as of 2020. It’s a high-energy choice, but does the repeating R of Remi

Like Poppy and Ember, Sage comes from the natural world. But it works on multiple levels, suggesting wisdom and a pretty shade of green, too.

I suppose Scout is boyish, but the most famous Scout of all time is the fictional Jean Louise Finch of To Kill a Mockingbird.

When I first started this list, I was stuck on Marlowe. But as soon as I added Scout, I found myself thinking that it might be the better direction.

Readers, over to you! What would you name a sister for Stevie Elizabeth?