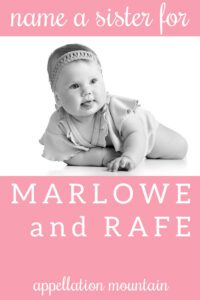 Hello, I’ve been reading your blog ever since I had my first child and love the fresh ideas and themes you come up with all the time.

I’m an American married to a Brit and live in London so have that whole side of things to contend with!

Our daughter is Marlowe (popular now but also my husband’s favorite town on the Thames) and our son is Rafe.

I’m due with a little girl and am stumped about what to name her? Any help from your readers is much appreciated, thank you!

I say it all the time: naming is that rare parenting responsibility that gets harder as we become more experienced. Our earlier choices rule out possible sibling names, for one. And we know lots more children, making even more names feel taken – or at least defined by

We have family outside of London, and I forever marvel at how different English can be! Factor in varying popularity trends and cultural associations and sometimes it’s just as tough as bridging two separate languages.

But you’ve found great names for your children, so I’m confident we can help you find another outstanding choice! I’d describe your style as modern with roots.

No one thinks of Marlowe as new. (I mean … Christopher Marlowe? Or, to bring it into the last century, Marlo Thomas?) And Raphael is downright ancient, anchoring breezy and brief Rafe.

And yet, they’re not the names that would’ve topped a list of schoolchildren in the 1980s. So they’re fresh and different, too.

What does that mean for Marlowe and Rafe’s new sister?

My sense is that you’d rather avoid the most popular choices, so no Poppy or Sophie or Maya. But you’re not look for something all that different, either.

And maybe a great meaning would help, too?

Let’s look for names that bridge the traditional and the unexpected, probably on the shorter side, and almost certainly nickname-proof, too.

A SISTER FOR MARLOWE + RAFE

Gwendolyn seems vintage, but Gwen has a very different vibe.

It’s a surname, like Marlowe, but with a very different sound – and a tie to the natural world, via holly.

Speaking of the natural world, I think Juniper matches the energy of Marlowe and Rafe. Or maybe goddess name Juno? Just June or Junie? Or even ancient Junia?

While there are subtle differences between American and British use, broadly speaking, Lainey reads feminine and Lane is (mostly) reserved for the boys. Laine splits the difference. Though I also like Lainey as a sister for Marlowe and Rafe.

While we’re talking about surnames, Langley appeals for two reasons. First, it’s another surname-inspired choice with a distinctive, interesting sound. But second, it’s cousin to the Norse Langlif, meaning “long life.” While you might not see that connection made everywhere, a little searching through the Nordic Names site backs that up.

Romy might be short for Rosemary/Rosemarie or Romilly, but it can also stand alone nicely. Remy/Remi are rising quickly in the US, and a little more slowly in the UK. But Romy seems distinctive.

The French form of ancient name Silvia, Sylvie feels traditional, but still surprising. It’s a great alternative to chart-toppers like Ivy and Sophie.

Because it refers to the dawn in Slavic, Zora seems like a hopeful, optimistic choice. But it’s also a great alternative to Aurora, as well as Cora and Nora. My first thought was actually Flora – because of the association with flourishing – but Zora is just a little more daring.

Overall, my favorites are Gwen and Zora, but Langley’s meaning seems compelling, too.

Readers, over to you! What would you name a sister for Marlowe and Rafe?