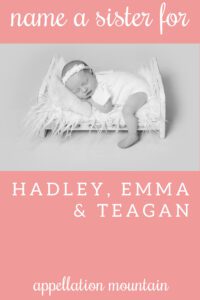 We have three girls, and are expecting our fourth daughter soon.

I have tended to like longer, traditional names, but my husband prefers more casual names.

For instance, with our second, I liked the name Emmeline, but we compromised with Emma.

For all of our girls, their nicknames have ended in an “ee” sound, so we are considering names that already incorporate that. I like Sutton, but the nickname Suttie … or any rhyme … doesn’t seem to work!

We have a complicated, 3 syllable German-like last name (starts with F, ends in -er), so we are trying to choose a name that isn’t too complicated.

Something that shortens to Ellie (like Elena) is sounding like a good idea, but I also like Sonja and Isley. Sydney was a front runner for Teagan – so basically, we are all over the place!

Congratulations on your fourth daughter!

Part of what makes names challenging in bigger families, I think, is weighing how much to match older siblings and how much to start fresh.

And often, it’s not obvious from the outside which choice a family has made. Our kids’ names are painstakingly balanced … but they’re also quite different!

To me, Hadley and Teagan make logical, obvious sister names. Sutton fits, too.

While Emma is a little bit of an outlier.

Except, of course, they’re all current, stylish choices for a daughter. Really, I wouldn’t bat an eyelash at meeting Emma and Sutton or Emma and Teagan or Teagan and Ellie or … you get the idea.

ELENA – A little more elaborate and maybe even feminine than your older girls’ names, but still neatly in that same group of broadly popular names. Something that stands out to me, though. Hadley always ends with an EE. But I’m guessing Emma and Teagan aren’t necessarily called Emmy and Teagy by friends? Or won’t be, at least, as they grow up. If you call your Elena “Ellie” all the time, I’m betting it might stick? So you’d have Hadley, Emmy, Teagy, Ellie at home … and Hadley, Emma, Teagan, Ellie in the wider world. Does that shift your thinking one way or the other?

ISLEY – A gorgeous and underused surname name that feels suitably feminine. But is the repeating -ley sound too similar to Hadley?

SONJA – What a great name! It’s surprising, too, completely different in style than your older girls’ names. But Sonja could reduce to Sonny. (Or Sunny, if you prefer to sunshine-y energy of the U spelling.) And it’s a GREAT name.

SUTTON – You could call Sutton something else. Essie, Toni, Tunny, Sunny? If you’re on board with calling her Sunny for short, well … that might solve the problem beautifully.

SYDNEY – I kind of love Sydney for you, but it’s also a name that feels a little older, at least compared to very twenty-first century choices like Sutton, Hadley, and Teagan.

ELIZA – An alternative to Elena that works every bit as well, just in case one El- name appeals more.

ELLIS – Another El- name, but this one in the key of Hadley/Sutton/Teagan. It sounds quite a bit like Alice, but shortens to Ellie.

ISABELLE – Or Annabelle or Mirabelle or any other -elle/-belle ending name? After all, there’s more than one way to get to Ellie. I love Emma and Isabelle as sisters.

LILY – Like Hadley, Lily automatically has an ‘ee’ sound at the end. Lily, of course, can be short for Lillian or Lilith or Liliana (choose your spelling), but it stands on its own, too.

MARLO – Easily nicknamed Marlee, Marlo is a bit of wild card. It looks like surname name Marlowe, but tends to be associated with traditional girls’ names like Margaret/Margot and Mary Louise. It’s not quite like Hadley, Emma, or Teagan, and I think that’s why it works so well.

PHOEBE – On a similar note, would you consider Phoebe? It’s an ancient name so at home in the twenty-first century.

SYLVIE – Sonja and Suttie made me think of Sylvie. It could be short for Sylvia/Silvia, but I like this name best on its own.

VIVIAN – Vivi is darling, and Vivian feels like a longer, traditional name that’s as tailored as Sutton, but as feminine as Emma.

Looking at your original list, I really want to talk you into Sutton called Sunny, or Sonja with the same nickname.

But if I look at my list? I think Marlo deserves a closer look.

Readers, over to you – what would you name a sister for Hadley, Emma, and Teagan?