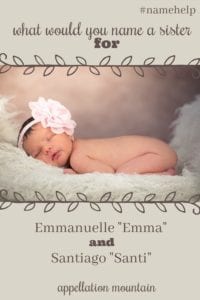 We would love help to settle on a name for our third child, due in August. We seem to be stuck with three names (really, just two because my husband vetoed one of them even though I’m hoping he’ll change his mind!)

My husband is Mexican, so we want the name to be easily pronounced in English and Spanish. Also, for me, the meaning of a name is important – I see it as a way of speaking into a child’s destiny.

My husband’s favourite is Camila – I’m not a huge fan of the meaning(s), but I like the name and I like the potential for nickname Mila. We would pronounce it “Cah-mee-lah”.

If there are any other meanings I haven’t found, please tell me!

My favorite is Rafaela – I love it, I love the meaning, “God has healed” and I love the way it sounds. My husband strongly dislikes this one, unfortunately.

Our compromise is Magdalena – we both like it quite a bit. I like Malena as a nickname, or Leni, or Magda (although it sounds a bit abrupt to me), or even “Dolly” (maybe that’s a taking it a bit far!). We would pronounce it “Mag-dah-lehn-uh” – last part rhyming with “henna.”

The meaning I’ve found is: woman of Magdala, which means “tower” — I like the idea of my girl being a tower (strong, unwavering, etc.)

We’ve got middle names already picked out: Sabel Abaranne. Sabel comes from my grandmother’s name, Isabel. (We would pronounce it Sabelle.)

Our other children are Emmanuelle (Emma) and Santiago (Santi). Any suggestions of other names we’re missing or not considering would be amazing! I feel like I’ve read them all.

Thank you so much!

Here’s the thing about meanings: we want them to be simple and straightforward. Look ’em up in a book, and there it is, easy and unambiguous.

But rarely is that the case.

First, it’s important to recognize that not every language or culture approached naming the same way. And it changed and evolved over time, meaning that the names used in, say, Madrid circa 1200 might not resemble the naming habits of the average family in Barcelona two hundred years later.

Secondly, often what we know is incorrect. Camila might come from the Latin camillus – a term used to describe well-born youth who attended at religious services. (I’m mentally calling them altar servers, but I’m not sure I have that image exactly right.) Or it could – like so many Roman names – have an Etruscan root, in which case, we might never know what the name originally meant.

Very often, a well-established meaning for a given name turns out to be folk etymology. We assume it means something, because it resembles the word – only the name evolved first. A good example? Katherine almost certainly comes form the goddess Hecate, but became associated with the word katharos – pure. The spelling changed, too, to more closely resemble the desired katharos.

Rafaela has to be out if your husband isn’t a fan. But do you prefer Camila to Magdalena? If so, you might get inventive about figuring out what the names means to you.

Camellia, the flower, takes its name from the naturalist Georg Jospeh Kamel. His surname might link back to the Arabic root you mentioned, or it could come from the animal. (For a fascinating look at camels in early medieval Europe, see this essay.) The botanical tie is reinforced by Alexandre Dumas’ 1848 novel, Camille. Camille is the French form of the name; the subtitle of his story translates to The Lady of the Camellias.

With a little bit of stretching, it’s possible to think of Camila as a flower name.

This opens the door to all the various meanings associated with the flower, including faithfulness and the coming of spring, both positive images.

I really like Emma, Santi, and Mila together, though I think I’d like Magdalena as a sister name every bit as much. I also wonder if you could use Mila as a nickname for Magdalena. The sounds are all there: MagdaLenA.

But if I haven’t saved Camila for you, and Magdalena still feels like too much of a compromise, how about:

Antonella – If Rafaela is out, would Antonella – or another Ella name? – be a possibility? I think Emma and Ella work nicely for sisters, at least when they have separate formal names to fall back on. And Antonella could also be Annie or Ana or Nell. It’s a feminine form of Anthony, and while the name’s exact origins are lost, we know that it’s associated with the Greek word anthos – flower.

Delfina – Delfina is slightly on the unusual side, at least in English. But I think it works nicely across languages, and Emma and Della sound very much like sisters. It comes from the ancient Greek city of Delphi, known for its oracle, which ties this ancient name to the ever-evolving future. But there’s also the delphinium flower – you might know it as larkspur. It’s also the root of our word dolphin, and curiously, the crown prince of France was once known as the Dauphin – same word origin. So Delfina means pretty blue flower, friendly and intelligent maritime creature, and, maybe even princess.

Mariana – This long and lovely name shortens to Mia, which is close to Mila. Mariana can refer to lots of things, including the ocean. (In Latin, marinus means ‘of the sea.’ Mary is also sometimes associated with the Egyptian word for love, and Ana comes from Hannah – grace. They might not be at the very top of the meanings list in your average baby name book, but they’re all defensible.

Miranda – This name comes from the Latin mirandus – wonderful. Shakespeare invented it for the daughter in the The Tempest. While it saw some heavy use in the 1990s, it never reached the heights of Jessica/Amanda/Rebecca, so I think it still feels very wearable for a daughter born today.

Valentina – We think Valentine’s Day – a good association! But the name comes from the Latin valens – strong, which is even better. Nicknames abound.

Valeria – I’d shorten it to Via, but Val, Vale, and Valley are options, too. It’s meaning is familiar; it comes from the Latin valere – to be strong, so it’s cousin to Valentina.

Overall, I’m inclined to try to convince you that positive associations abound for Camila, because I love that it’s your favorite, and I think it works well with your children’s names. But if a strong meaning matters more? Then the Vals could be your go-tos.

Readers, what do you think? Am I stretching too far on the meanings? And can you think of any more options for Emma and Santi’s sister?