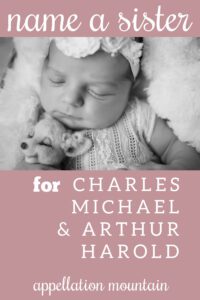 We have two boys. Their names are Charles Michael and Arthur Harold. Our last name is similar to Winters.

We are now having a dilemma naming our third child, a daughter.

I like classic boy names with nicknames – solid names with lots of history.

My own name is Agatha and while I love the name, it feels sloppy to my ears and leaves me with unattractive nickname options. I prefer names that are crisp, and I love many of the names from your classic girls name list like Jane, Grace, Helen, and Leah.

My husband is a much more modern namer. He wanted to name our first son Arsen.

How do we close the gap between something that feels modern and not fusty but still has a long history of use without being a weird mouthful like Agatha?

If it’s a tank of goldfish, where we can use all of our favorites and the choice is ours alone.

Naming a human being, when we have to compromise with another human being? Yeah. It’s tough!

The thing is this: it sounds like your husband ultimately defers to you on name choices – first and middle. While Charles and Arthur are quite current, they’re traditional names with history to spare. There’s not a hint of Arsen (or anything else particularly modern/unconventional) in their names.

But the pool of potential girls’ names tends to be deeper. And parents are often willing to take risks on naming their daughters that they won’t with their sons. (I’m so guilty of this – our son’s name was Top 20 the year he was born, and entered the Top Ten a few years later. Our daughter’s name? Never in the Top 1000.)

So I wonder if the challenge is to find a traditional name for a girl that’s just not terribly common right now? The names you’ve suggested – like Jane – could be logical compromise choices. After all, Jane offers plenty of backstory and a bright, sparky sound.

But if that’s not quite right, maybe we’re looking for something a little less familiar?

Regarding your own name, I think when you say “sloppy,” maybe you mean that Agatha isn’t especially stylish right now? It’s old lady, but not granny chic? So we’re also looking for a name that feels like an up-and-coming choice, even if it’s not quite there yet.

A SISTER FOR CHARLES and ARTHUR

The Spanish word for soul, Alma sounds gently old-fashioned and novel at once.

A Scottish word meaning pretty, Bonnie fits in with Belle and Jolie, but feels a little more vintage.

A perfect sister name for Charles and Arthur, but definitely on the less-expected side.

Originally a tailored French nickname for Nicole, with plenty of literary and pop culture references. (My favorite: Colette is the female chef in Ratatouille.)

We love names like Evelyn and Vivian that sound crisp, tailored, and pulled-together. Davina is just the tiniest bit frillier, with that -a ending, but still plenty sharp.

A mini name with an ethereal vibe.

Nature name Laurel would be big today … if only Laura and Lauren hadn’t had such a good run in the 1980s and 90s. But it is catching on now, a logical choice in our age of Hazel and Rowan.

The French form of Sylvia, Sylvie sounds quite current and completely fresh … but also traditional.

My favorites for you are Sylvie and Colette – especially Colette!

I also wonder if pairing a great, modern middle with your daughter’s first might get your husband on board? It mixes your preference for a rock-solid, traditional first with his preference for a slightly more daring name.

Readers, what would you suggest as a sister for Charles Michael and Arthur Harold?