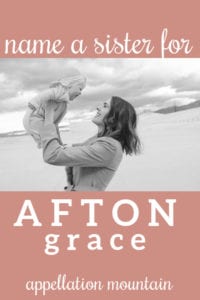 We are struggling with a girl name that is unique, but easy to say and spell.

Love middle names that are faith based.

Thank you for your consideration!

Afton Grace hits it out of the park, doesn’t it? It’s unusual, but straightforward. And the middle name is richly meaningful, plus it balances out the unusual qualifies of the first name.

While Afton’s sister could be Anastasia or Gloriana, I wonder if you’d be more comfortable with names that feel a little more restrained. It’s not exactly unisex – while I can imagine a boy named Afton, it’s used almost exclusively for girls. But it’s not frilly and princess-y, either.

I can imagine a nature name working well with Afton. Or possibly a surname name?

And, of course, there’s the question of just how unusual. 89 girls (and 12 boys) were named Afton in 2018, which makes it quite unlikely you’ll ever meet another Afton. But it’s possible to choose a Top 1000 name and still feel like it’s distinctive and different.

A SISTER FOR AFTON

Blythe – An archaic word meaning “happy,” Blythe is every bit as tailored as Afton. It’s also equally unusual – just 97 girls (and 6 boys) were named Blythe in 2018.

Briar – A unisex nature name that’s just on the fringes of the mainstream, Briar succeeds names like Bryce and Brianna. It’s a little prickly, but still quite lovely. It ranked #687 for girls and #807 for boys in 2018.

Ember – At #209, Ember is the most popular suggestion on this list. But I think it sounds fresh and different – and absolutely perfect with Afton.

Harbor – Harbor was given to 80 girls (and 39 boys) last year. It’s a nature name, but there’s something of a virtue vibe to Harbor, too. Oh, and if this is close-but-not-quite, I almost suggested leafy Arbor.

Lavender – With Violet topping the charts, and Harry Potter using the name for a minor (but much-mentioned) character, Lavender could’ve taken off. 101 girls were named Lavender in 2018 – a new high, but still nicely uncommon.

Meadow – Fictional mobster Tony Soprano gave this gentle nature name to his daughter on early 2000s television hit The Sopranos. While it’s gained steadily in use since then, at #516, it’s still fairly uncommon. The ‘o’ ending seems quite stylish, putting this name midway between Margot and Prairie.

Sylvie – The French form of ancient name Sylvia, it comes from the Latin silva – woods. At #897, it’s a good stands-out/fits-in kind of choice.

Vale – Savannah Guthrie gave this poetic nature name – it means valley – to her daughter in 2014. There’s also Vail, as in Colorado. Both are spare, nature-informed names that would pair beautifully with Afton.

And now, the conundrum: I think any name on this list would pair beautifully with Afton!

Let’s look at middles for a minute. If you chose Grace for the spiritual aspect, I wonder if you’d consider Glory, Hope, Pax/Peace, Praise, Psalm, or Sunday?

With middle names factored in, I think my favorites are Briar Hope and Sylvie Praise. I think they’re both perfect paired with Afton Grace, and nicely balanced between the familiar and the rare.

Readers, over to you: what would you name a sister for Afton Grace? 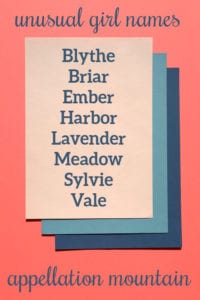