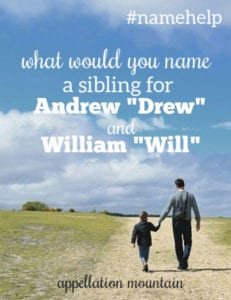 UPDATE: She’s here! Amanda writes: Thanks to everyone for SO many good ideas. We appreciated the encouragement to use Charlie, and definitely will if we have another son in the future. After LOTS of back and forth, we got our list down to Tessa “Tess/Tessie” and Elizabeth “Ellie/Ella” only to decide she didn’t look like either name. We went back to all of the suggestions and ended up choosing Emily “Emmy” Tepper. Not a family name, but it fits her perfectly!

We have two sons, Andrew “Drew” Martin and William “Will” Daniels and now we’re expecting our third child, gender unknown. Andrew is named after my husband’s younger brother, who passed away when they were children. William is named for my dad, who died during that pregnancy. Both were emotional choices, and we’ve always been glad we named both of our boys for those reasons.

We’re not planning to use a family name necessarily, but lots of people are assuming that we will. It’s becoming awkward because we don’t want anyone to feel slighted, but we also can’t imagine going down a list of loved ones.

Our favorite name for a boy is Charles “Charlie” – no family connections. We’re not sure about a girl, but we like Evelyn “Evie” and maybe Charlotte. Except we don’t like Charlie for a girl, maybe because I think we’d like to save Charles in case we did have a son in the future, and Evelyn isn’t great with our last name.

I should add that Martin and Daniels are family last names, and we’d almost certainly use family names for a future child’s middle. Tepper is next on our list, but if it doesn’t sound right with a first name, we could choose something different.

Our last name is Irish and pretty common, but also pretty easy to match. It starts with an S, though, so we don’t want to either spell anything with initials, or use another S name as a first name.

A few things jump out at me:

Based on all of this, I have to say that it’s time to go your own way.

Imagine if you did find one more family name that you could agree on for this child. It would almost certainly lock you into a pattern for a future child, too, right? (I mean, not really. Except if you feel some pressure now, I imagine that wouldn’t lessen.)

Plus, Charles “Charlie” Tepper LastName is all kinds of great. Drew, Will, and Charlie sound just like brothers. And it seems like you agree on that name for a son … and only that name.

So that leaves girls’ names. It’s possible that you’d prefer a slightly different style of girls’ names, and yet, it seems like you’re thinking along the same lines. You’re pro-nickname, prefer something on the traditional side, and probably tend to avoid unisex names.

That leaves so many options! I’m going to suggest a few, and I know readers will have more ideas to suggest, too.

Adelaide or Adeline – Do you like the idea of Addie as a nickname? There are lots of formal name options, but I think Adeline and Adelaide feel the most like Andrew, William, and Charles.

Eleanor – Eleanor feels every bit as classic as your boy names. It shortens to Ellie nicely, or maybe Ella. I mentioned Elizabeth earlier, and I think that could be a great option, too.

Juliet or Juliette – While your boy names are classic, they’re also contemporary favorites, all ranked in the US Top 100. So maybe Juliet? Julia would be the more traditional pick, but I wonder if Juliet would appeal to you even more. Jules and Julie are the logical short forms.

Katherine – I tried to avoid the most classic of the classics on this list, because I feel like they’re easy enough to find on lists. But I really do like Called Katie or Kate, especially with Drew and Will and (maybe) Charlie.

Rosalie – As with Juliet, I suppose the truest classic would be Rose. But Rosalie feels like it might be just the tiniest bit more interesting, and you could call her Rose or Rosie.

Teresa or Theresa – It seems like you prefer nicknames that obvious connect to given names, so something like Margaret-called-Greta might be a stretch. But Tess (and Tessie and Tessa) are traditional nicknames for Theresa, and I think Tess sounds exactly right with Will and Drew.

Overall, my favorite is either Rosalie called Rosie and Rose or Katherine called Katie and Kate. I think both names are impeccably classic, but nicely stylish, too. And I think all the nicknames work well with your sons’ nicknames.

Readers, what would you suggest as a sister for Drew and Will? And do you have any advice on dealing with expectations around family names?

Image by Marius Mangevicius from Pixabay