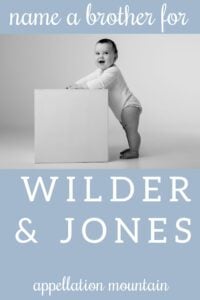 We love our boys’ names and had no trouble agreeing on either of them. But now we’re expecting a third (and final) son, and nothing seems right.

Wilder was always our boy name. We liked the idea that Wilder could be Wil/Will if he ever wanted something more traditional. My husband and I met leading an outdoors experience for incoming college freshmen, so it seemed like an outdoorsy name, too.

With our second son, we settled on Jones pretty quickly for similar reasons. We liked the Jo/Joe nickname option and the idea that everyone knew how to spell it, but he wouldn’t be one of three boys named Liam.

The issues this time:

Our last name sounds like Man-yun, but spelled differently.

Are we overlooking the perfect name?

I love the idea of cool surname names with classic nicknames! We hear it so often for girls – Emerson-called-Emmy or Madison-called-Maddie. But the options are there for boys, too, and they’re every bit as appealing.

One caution, though: it strikes me that you’re not calling your boys Will or Joe. So while I’ll focus on surnames that could have traditional short forms, maybe it’s not a dealbreaker if a name lacks one? (I’ve added a few in the mix that lack an easy nickname, just to see.)

And yes, … I do agree that the world has caught up to you!

Ten years ago there wasn’t a single Wilder out there. Now I really do hear it more and more often. But it’s still distinctive and different, so I think we can find a name that will be similar … possibly a little more familiar than you might like, but not Carter/Logan/Mason levels of popularity.

A BROTHER FOR WILDER and JONES

Not the most surprising choice – it currently ranks #101. But the possibility of shortening Bennett to Ben might appeal. For more Ben names, see this list.

Calder isn’t in the current US Top 1000, even though it sounds like could – maybe should be! Cal isn’t quite as classic as Will or Joe, but it fits the general theme.

Most Cams are Camerons, of course. But Cameron isn’t great with your surname. Plus, it’s been a Top 100 pick for years, which also makes it not quite what you’re after. Campbell, though? It’s rare, a name that ranked on the fringes of the Top 1000 earlier in the 2000s. (It peaked at #663 for girls in 2006. For boys, Campbell never even cracked the Top 900.)

There’s no obvious nickname for Crosby. And yet, I think it sounds great with Wilder and Jones. It’s a different ending sound, which makes it distinct from your older boys’ names. Plus, Crosby is crisp and high energy – just like the names you’ve already chosen.

Easy nickname Dex puts this name on the list. And yet, Dexter strikes me as more vintage/throwback than Wilder or Jones?

Does Gray count as a nickname? Like Crosby, I love the -y ending with Wilder and Jones. At #396, Grady is known but not too popular.

Jacoby looks like Jacob-with-a-y, which opens the door to nickname Jake. Sound-wise, Jack is another option.

Len, Lex, and Leo all feel like obvious nickname choices. The X ending is different, too – and yet, at #291, Lennox is a little more popular than you might wish.

How do you feel about alliteration? Maguire shortens to Mac. And yet, it’s such a great name – I’d want to use it in full!

It’s easy to imagine Rafferty shortening to Rafe, just like the more traditional Raphael/Rafael. This might be my favorite choice if you planned to shorten it … and yet, since you tend to use the names in full, that sways my opinion.

In fact, my favorite is Crosby. It’s got a great sound. At #801, it’s similar to Wilder and Jones in terms of popularity. And I love the way the three names sound together: Wilder, Jones, and Crosby.

But if the lack of nickname does matter? Then I think I’m most drawn to Calder, even though it means sharing the -R ending of Wilder.

Readers, what would you name a brother for Wilder and Jones?