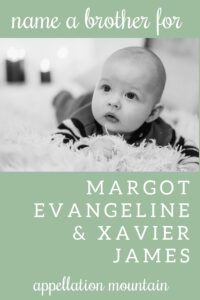 We’re expecting a baby boy at the end of January.

Girl names are easy for us. We agreed on Margot Evangeline weeks before our daughter was due.

It took us until the night before I went into labor to settle on Xavier James.

My girl list (that my husband is pretty much on board with) includes Cecilia/Celia, Esme, Phoebe, Sylvie, Willa, and maybe Gwen/Gwendolyn. There are other names that have gone on/off over the years, but I’m sure we could name another daughter. (And maybe we will!)

But right now we have no boy names.

We’d like something that’s traditional, but not like James/David/John/Ryan traditional. Preferably something we don’t know lots of kids already named.

Also, we’d like the spelling and pronunciation to be obvious. It surprises me how many people leave the T off Margot or pronounce Xavier with an extra X, like X-ZAY. It shouldn’t be hard, but every time I think I like a name, there’s a problem. We almost agreed on Elliot, but then realized it could be Elliott. (Or even Eliot?) And that ruined it for me.

Our last name sounds like the name Louis, but spelled differently.

I know what you mean about boy names. And it’s not just you, either.

That suggest that parents feel like their options are a little more constrained when naming a son.

The good news, though, is that you know exactly what you want AND you’ve identified a key priority: straightforward spelling and pronunciation.

There are some great choices to consider.

A BROTHER FOR MARGOT and XAVIER

Maybe, strictly speaking, Archibald is the more traditional choice? But no one is using Archibald – not really – while Archer balances nicely between familiar and too common.

Axel could maybe be misheard as Alex. But it really only has one possible pronunciation, and I think it has just enough edge to be a perfect brother name for Xavier. It sounds modern, but it’s actually a traditional Danish form of the Old Testament Absalom.

There’s something high-energy and smooth about Finn. But it’s tradition-adjacent, too, the kind of name with plenty of history, just below the surface.

Or maybe Griffin, for something Finn-like but with an extra syllable?

Hugo repeats Margot’s bright ‘o’ ending, but I’m not sure that’s a problem. It’s a classic, but unexpected, choice – just like your older children.

Strictly speaking, Maxwell is a surname. But it feels like a well-established first. And it shares sounds with Margot and Xavier, in a very subtle way.

The ancient empire and enduring city lend Roman plenty of strength. It’s a current sound, too, substantial and on-trend.

Overall, I’m most drawn to Archer. If the priorities are a familiar, not common, name with a clear spelling and pronunciation, it’s hard to do better than Archer. It’s distinct and different from Margot and Xavier, but still a style match.

Readers, what would you suggest as a brother for Margot and Xavier?