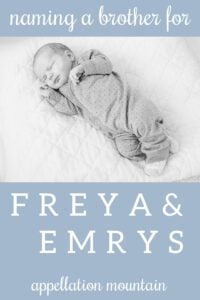 We’re excited to be expecting a baby boy in May. Our older two children are Freya and Emrys.>When we named Freya several years ago, the name was still very uncommon here in the US.

A couple of years later we felt another rare name would be a good match and chose Emrys for our son. We loved the connection to Arthurian Legend and thought it was a nice complement to our daughter’s mythological name.

Of course, Freya has since rocketed up the name charts to within the top 200 and looks poised to continue its rise.

On the other hand, Emrys isn’t even in the top 1000 and doesn’t look like it will be any time soon!

So, I suppose that in just a few short years, these two names have become kind of an odd pair themselves which makes things more confusing as we try to select another name to join the group.

The list of names we’re considering currently consists of:

My husband loves Taliesin with the nickname Tal. I love the nickname, but just can’t get on board with the given name.

I love August and Lachlan, but my husband isn’t a fan.

I’d love thoughts on our list, but we’re completely open to suggestions! Thanks for any help you can offer!

How exciting to be expecting your third – congratulations!

It’s funny how we go out of our way to balance our children’s names – origins, meaning, popularity, syllables, image, nicknames – only to have the world come along and change everything after the fact.

So that’s out of our control.

But the good news? Freya and Emrys are great together, and they still feel nicely matched. Even though Freya is rising in use, it’s still the kind of name that’s VERY rare on 20-something and older America. Freya might have another Freya on her soccer team, but it won’t be the coach’s name.

I think the strongest threads are:

When I look at that list, I see your dilemma. Malcolm does feel a little more conventional. August, too.

That leaves Lachlan and Tristan … but it sounds like Lachlan is out.

Tristan, then, is the last one standing.

I do think it’s perfect. It hits every one of the threads I hear in your older kids’ names. And while it’s similar to Freya, popularity-wise, the good news is that Tristan almost certainly peaked in the late 1990s, without ever quite catching on. That means that yes, your Tristan might have a soccer coach with the name … but he’s less likely to share it with a teammate.

Still, let’s see if we can come up with some other names – because if Tristan fit, then you wouldn’t be writing, right?

A BROTHER FOR FREYA and EMRYS

An Irish god of love and youth, and the name of several historical kings, Angus fits with Freya and Emrys nicely. But does the repeating -s ending seem too close? Still, Angus hits that everybody-know-it but nobody-is-choosing-it sweet spot.

A name borrowed from medieval French legend – though, full disclosure, Bayard was the wildly powerful horse. Still, Bayard is rare as a first, somewhat familiar as a surname, and shortens to accessible nickname Bay.

Okay, Fintan is the name from Irish legend. Well, lots of Finn names feature in their tales, from Finn McCool to plenty of saints. Fintan, legend tells us, was the only person to survive the Great Flood. Finnick is borrowed from The Hunger Games stories, but it feels like a cousin to so many heroic, adventuring Finns.

You’ve yet to choose a name from Greek or Roman myth, so how about Leander? Like Tristan, Leander is famous for a tragic love story. It also shortens nicely to Leo or Lee … or Ander, so plenty of choices.

Like August, Magnus has roots as a title. It means “great.” Or possibly strong, because Norse myth gives us a son of Thor called Magni. The name is well-used across northern Europe, but seldom heard in the US. (Though unlike Emrys, it does fall in the current Top 1000, at #806.)

Another option from Greek myth, Orion is the hunter, immortalized in a constellation. At #326, it’s more popular than many names on your lists, but still relatively uncommon.

Maybe Oscar is too similar to Malcolm? They’re both great name with stories galore, and a sort of stands-out/fits-in quality.

Thor is too big of a name for a child, especially in our Avengers-soaked moment. But Torsten – literally, Thor’s stone – might bridge the mythological and the accessible.

Another Norse name that’s not yet wrapped up in the Marvel universe, Vidar was a son of Odin in myth. It’s an incredibly cool sound, but maybe it feels more like an import than Angus or even Torsten.

First and most importantly: from your original list, I really wouldn’t rule out Malcolm.

Maybe it’s not a perfect fit in terms of cool/surprising/unexpected factor. There’s something strong and enduring about Malcolm. I’d probably describe it as a solid choice. But that’s a good thing, right? Freya, Emrys, and Malcolm sound just right together.

But if the legend/myth part matters, and I can see that it does, I love Tristan. It splits the difference between Emrys and Freya, and it avoids some of the pronunciation/spelling issues with Cian and possibly Rhydian.

From my list, I’m tempted to push for Angus. It feels like the perfect name we all know, but seldom hear on an actual child. Yes, it shares an ending with Emrys – but Rhys and Gus aren’t too close. Plus, I think Angus has a lot of cool factor. (Maybe it’s the AC/DC factor!)

Readers, what would you name a brother for Freya and Emrys?