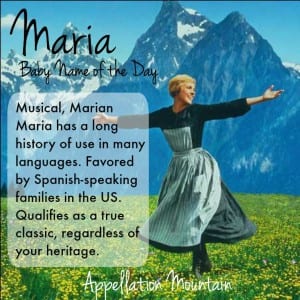 It’s a musical, Marian name as classic as they come.

Our Baby Name of the Day is Maria.

Maria: The Mother of All Names We tend to think of this name as Spanish, but that’s not exactly so. Maria began as the Latin form of Mary.

It’s also the preferred form in Spanish, Italian, German, and many other European languages, and is a wildly popular name from Finland to Brazil.

Double names formed with Maria are common, many honoring the mother of Jesus: Consuelo, Pilar, Lourdes. Many of those second names stand on their own today.

In raw numbers, more girls born in the US have been named Mary and Marie. But immigration from Spanish-speaking countries has made Maria a very common name for adults in the US. HowManyofMe puts Maria #23 and Marie #89.

This name has plenty of musical appeal thanks to two twentieth century staples.

In 1957, West Side Story gave us an updated version of Romeo and Juliet. This time, it’s a tale of rival street gangs in 1950s New York, with a girl from the Puerto Rican Sharks in love with a boy from the caucasian Jets. Even if you’ve never seen the successful 1957 musical or the 1961 Oscar-winning film version, you probably can hum the tune of “Maria” and maybe know the line sung by a lovestruck Tony: I just met a girl named Maria.

Then there’s The Sound of Music. On stage in 1959 and the big screen in 1965, the story of the musical von Trapp family starts when Maria, a struggling postulant at Nonnberg Abbey is sent to serve as governess to the a widower’s children. When the Mother Superior and other nuns debate what to do with her, they sing How Do You Solve a Problem Like Maria? In 2006, a British reality show borrowed the lyric for their show’s title. “How Do You Solve a Problem Like Maria?” was a competition to find the new star of a West End production of The Sound of Music.

There’s also legendary soprano Maria Callas, and plenty of other singers and songs with the name.

All of this makes Maria a familiar name – probably so familiar that parents often don’t consider it. And yet, I think it would be quite the surprise to meet a little Maria, and the name would be nicely on trend.

In fact, any form of this name, including Mary and Marie, could hit the sweet spot: a name that is instantly recognizable and easily spelled, but not likely to be shared with other girls her age.

Unless, of course, you live in a heavily Spanish-speaking community. Because while it’s inaccurate to consider Maria only Spanish, it remains most popular with Spanish-speaking families. Four forms of the name – Maria, plus three double names – rank in the Baby Center en Español Top 100.

But overall, let’s call Maria a classic, romantic name that doesn’t always get the attention it deserves.

What’s your favorite form of this enduring name?