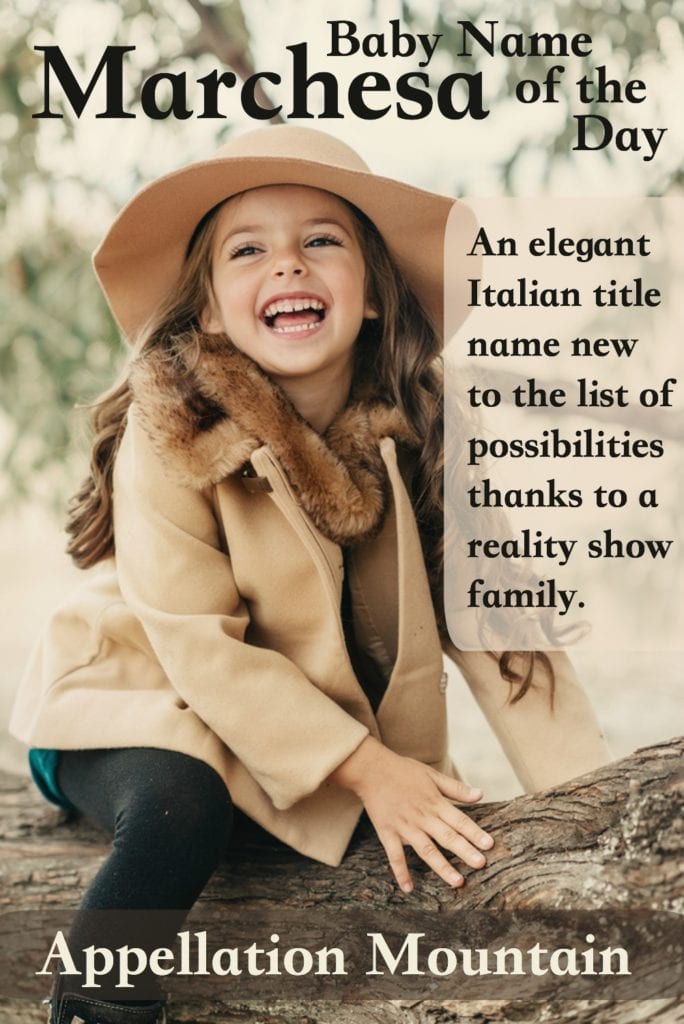 Marchesa might sound like another crazy reality star baby name, but there’s a fascinating story to tell.

It might look like March plus -esa, but this Italian word is pronounced with a hard k: mar kay zuh.

If you know your aristocratic titles, you might recognize this one.

In Great Britain and Ireland, a marquess ranks below a duke and above an earl. Marchioness serves as the feminine form.

Equivalents in other languages include:

Once upon a time, important duties fell to a marquess. He usually protected border lands. The Middle Latin term marca meant frontier. It evolved into the French word marche. The titles followed. English sometimes uses the term “Marcher Lord.”

So while the term is obscure in English, it fits with grand names like Princess and King. Contessa, the Italian equivalent of Countess, has enjoyed sparing use over the years, too.

One specific aristocrat made her mark: Luisa, Marchesa Casati.

While the couple never divorced, Camillo and Luisa lived apart. Luisa preferred to host extravagant parties. She opted for flamboyant fashion statements. Word is that Luisa wore live snakes as bracelets and walked her pet cheetah on a leash.

The aristocrat also traveled widely, entertained constantly, and knew everyone in the artistic and literary worlds of the early twentieth century. Isadora Duncan and Pablo Picasso, Coco Chanel and Ezra Pound all knew Luisa. She connected with the established and the promising alike, and served as an influential patron of the arts in the pre-World War I era.

Marchesa: The One and Only

Casati supported the arts, but she also became the subject of many portraits and sculptures. Several writers created fictional characters based on her real life. Vivien Leigh played a Casati-esque character in 1965’s La Contessa. A few years later, Ingrid Bergman starred in a similar role in 1976’s A Matter of Time.

Designers from John Galliano to Karl Lagerfeld to Alexander McQueen have created collections citing Casati as their muse.

The most recent honor also comes from the world of high fashion. British designers Georgina Chapman and Keren Craig named their fashion house, established in 2004, after Casati. They named their company Marchesa.

Celebrities wear the label on red carpets all over the world.

This puts Marchesa somewhere between Armani and Messiah. And yet, the name feels wearable, maybe even stylish.

It’s never been given to even five girls in a single year. But we welcomed 17 girls called Contessa, along with 148 Queens, 41 Queenies, and 267 Princesses. This makes the name rare, but not out of place.

On sound, Marchesa might appeal to those who love Francesca and Isabella. Nickname Markie fits right in with Sadie, Hattie, Frankie, and their sister names.

If you love rarities that feel connected to the world of high fashion and the arts, Marchesa could make a surprising choice.