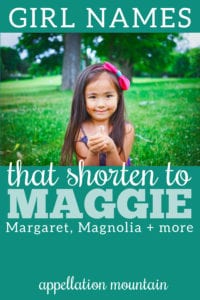 Maggie names range from the obvious Margaret to the well-why-not Marigold, with plenty of options in between.

As nicknames go, Maggie feels like a classic. It’s heard in nearly every era. There’s Dame Maggie Smith and Rod Stewart’s “Maggie May.” More recently, Maggie Q and Maggie Gyllenhaal are among many actors with the name. And that’s not counting fictional Maggies, like the youngest character on The Simpsons.

It might work independently, of course. In the 1880s, the US popularity charts list just Maggie as a Top 100 name.

But chances are that most Maggies have a formal name waiting. With so many options, it’s tempting to pair friendly, accessible Maggie with a surprising longer version.

If that idea appeals to you, this list of Maggie names is your starting point!

As as Elizabeth and Katherine, timeless Margaret is the obvious formal name for Maggie. And Maggie? It’s the go-to nickname.

Originally from the Greek word for pearl – margarites – Margaret has been worn by saints and queens, writers and politicians. In any field of endeavor, there’s an accomplished Margaret, and a surprising number of them answered to Maggie – at least at some point in their lives.

Move over Harmony and Cadence!  Madrigal makes for another musical name, this one from sixteenth century Italy. The term originally referred to a type of secular music.

Originally an Occitan form of Magdalena, Magali/e seems like the most obvious of the Maggie names on this list – and yet both spellings are very rare in the US.

Another Magdalena nickname, Magda is heard mostly in German, Polish, and other parts of eastern Europe. But in English, Magda might be the full name and Maggie the short form.

A place name from the ancient world, Magdala stood on the shores of the sea of Galilee. Mary Magdalene called it home – hence her name. Magdalene has been whispered down the alley into Madeline and Madelyn, but the original place name belongs with the Maggie names. It comes from a Hebrew word meaning tower.

Heard in Poland and Spain, Sweden and Croatia, this pan-European name borrowed from Magdala is an another appealing possibility.

A fast-rising floral, Magnolia benefits from that -lia ending and lots of nicknames, including, of course, Maggie.

Like your names nearly extinct? Crushed that Matilda feels mainstream? Magnilda and Magnhilde come from Germanic elements meaning “mighty” and “battle.” It has history in Scandinavia, thanks to a nineteenth century Norwegian novel by the name.

If girls can answer to Mackenzie and Madison, why not Maguire?

The pizza and the drink make Margarita challenging in English, but it is the version of the name most common in Spanish, as well as several Slavic languages.

Like Maguire, Margolis is a surname name that ultimately traces its roots to margarites – pearl, just like Margaret.

Ends-with-o names for girls are among the most vibrant choices in use today, and Margot is the grande dame – for many years, the only familiar choice ending with o for a daughter. Today Margot feels traditional, slightly bohemian, and terribly appealing. Few parents choose Margot to shorten it to Maggie, but the Margots themselves may choose to do so.

The French form of Margaret, elegant and rare.

Another name that’s just as vivacious and blooming as Magnolia, but even rarer, Marigold could shorten to Maggie – though Goldie and Mari might seem more obvious.

Here’s an unexpected entry on the Maggie names list: any double name that includes a strong M and G sound, with an ‘a’ in there, too. Mary Agnes and Mary Agatha spring to mind, but possibilities abound. Mary Greta or Mae Gabrielle, maybe?

What are your favorite Maggie names? 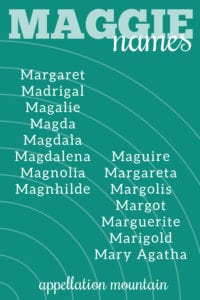