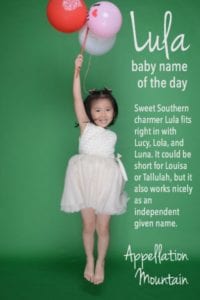 File Lula with so many great Lu- names. Call it less formal than Louisa, but not quite as casual as Lulu.

Our Baby Name of the Day comes from the quirky girl names list, with thanks to Felecia for the suggestion.

If you think Lula is just some new-fangled twist on Lucy and Lola, this post might come as a surprise.

It’s the birth name of celebrated Southern author Carson McCullers. In Breakfast at Tiffany’s, we learn that Holly Golightly started out life as a Lula, too. JK Rowling gave the name to a minor character in The Cuckoo’s Calling, and there’s a minor figure in To Kill a Mockingbird, too.

Rockabilly anthem “Be-Bop-a-Lula” was recorded first by Gene Vincent and his Blue Caps back in 1956. At least a dozen others have covered it. While Vincent is singing about a girl, he probably chose the name simply because it worked – and, of course, would have been familiar as a woman’s name at the time.

Looking for one more musical tie-in? It’s also the given name of Stevie Wonder’s mother – and his first songwriter, Grammy-nominated for “Signed, Sealed, Delivered.”

Maybe the song deserves credit, or perhaps the literary references shape the name’s image. But something about this one feels country – or maybe Southern is the right word. I expect to find a Dukes of Hazzard character called Aunt Lula. (Only I didn’t.)

Laura Dern wore the name in Wild At Heart, the 1990 David Lynch movie also starring Nicolas Cage. It’s dark and twisted, but the movie wraps up with a happy ending. The movie takes place in the American South, based on a novel by Barry Gifford. Gifford continued the couple’s story in additional novels.

A small town in Georgia bears the name – and the story fascinates. Apparently, the engineers building the railroad in the 1870s were taken with a local beauty, Miss Louise – or maybe Mary Louise – Phinizy. The daughter of a wealthy Georgia family, her nickname inspired the place name. The family tree is easy enough to trace, and the Phinizys and descendants feature in plenty of intriguing tales. Louise’s father invested in the railroad, so perhaps there’s more to the name choice.

As Miss Phinizy might attest, despite ample evidence that this name stands alone, it likely started out as a short form of Louise and company.

Today, nearly any Lou/Lu name could lead to Lula. Tallulah includes the sound, of course.

But it seems more likely to be bestowed independently, an alternative to Luna, Lucia, Lila, Layla, and even Lily.

Back in 1994, Bruce Willis and Demi Moore reigned as the hottest celebrity baby namers of the decade. They’d welcomed Rumer in 1988 and Scout in 1991 before third daughter, Tallulah Belle, arrived. By some standards, it might be the tamest name of the trio. The youngest daughter reportedly preferred the nicknamed Lula.

Fast-forward to 2016, and it’s the name Liv Tyler gave to her youngest child and only daughter, a sister to Sailor and Milo.

Lula: By the Numbers

Liv Tyler probably put this name on some parents’ radar, but that’s not the only factor. Pitbull sings about a girl by the name in his single “El Taxi,” from Grammy-winning 2015 album Dale. It’s no lullaby, but it makes the name more familiar.

Incidentally, in Brazil this one goes to the boys. It serves as a short form of Luiz. Former president Luiz da Silva is known by the nickname.

While the name continues to rise in use, it remains comfortably outside of the US Top 1000. It feels vintage, Southern, and slightly offbeat. If you love Mae and Pearl, Sadie and Ruby, this might belong on your list, too.

If you’re after something as friendly and informal as Molly or Daisy, but far less frequently heard, Lula belongs on your list.

Would you consider this name for a daughter? Or do you prefer a different Lou/Lu name?

The original version of this post was published on November 7, 2013. It was revised and republished on September 27, 2017.