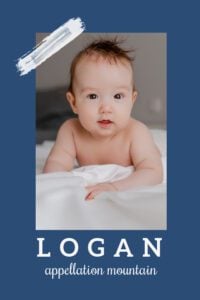 The baby name Logan brings to mind X-Men’s Wolverine, and probably at least one or two real life boys, too.

Thanks to Amanda for suggesting her son’s name as our Baby Name of the Day.

Long before Marvel ever dreamed up the X-Men, Logan was a Scottish surname, from the Gaelic lagan – little hollow.

There’s at least one still on the map today, in Ayrshire.

The Scottish Clan Logan comes with a tartan, too.

Plenty of those Scottish Logans made their way to America early days.

Benjamin Logan  commanded the militia in Kentucky during the American Revolution, and later helped organized the drive for statehood.

General Edward Lawrence Logan served in the Spanish-American War and World War I.  Boston’s Logan International Airport is named after him.

Thanks to the surname’s widespread use in the US, a handful of children have always received the baby name Logan.

Writer Logan Pearsall Smith was born in New Jersey in 1865. He, in turn, was named for his ancestor, James Logan, the first chief justice of the Pennsylvania Supreme Court.

In brief: a huge increase in population means that the Earth’s population is only allowed to live to a certain age.  On a designated birthday, each person is required to report to be euthanized.

Not everyone complies, and Logan is one of the enforcers who hunts down those who flee. Until, inevitably, Logan’s time is up – and he decides to make a run for it.

It became a movie in 1976, earning an Academy Award for special effects.

The baby name Logan appeared in the US Top 1000 most years, hugging the fringes of the Top 1000.

And the name continued to gain in use.

The world first met Wolverine in the 1970s, first as a cameo in The Incredible Hulk comic.

We eventually learn that Logan was the surname of his birth father – there’s a whole backstory there. He has all sorts of adventures, with his retractable claws and other superhuman powers. And while the X-Men are heroes, Wolverine is complex – brooding and tough.

That’s part of why he’s such a fan favorite.

Hugh Jackman played the role of Wolverine for the first time in the year 2000 – a breakout role for the Australian actor. He would play the role in eight movies total, ending with 2017’s Logan, a commercial and critical success.

It’s easy to give credit for the baby name Logan’s rise to the movies.

But something else happened along the way.

Tons of fictional characters on television series answered to the name. 24 gave us President Logan, and soap opera series The Bold and the Beautiful used it for a family surname, too.

Veronica Mars’ love interest was Logan, and Rory on The Gilmore Girls had a long on-again/off-again romance with a Logan, too.

The baby name Logan has outgrown those science fiction and superhero origins.

We now think of lots of ordinary people with the name. There’s controversial YouTuber Logan Paul, but also actor Logan Lerman, known for playing Percy Jackson, and plenty of athletes and others by the name.

All of this cements the baby name Logan’s status as a new traditional favorite. It’s the kind of name you wouldn’t have expected in 1852 or even 1922 … but feels perfectly mainstream today. It’s a rugged, handsome choice for a son.

What do you think of the baby name Logan? 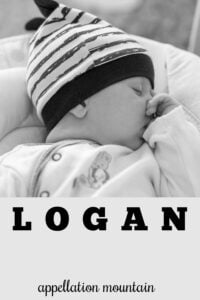