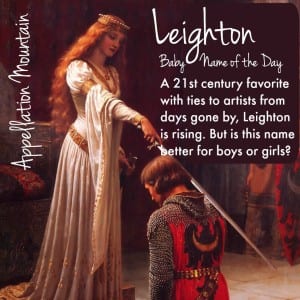 Let’s turn our attention to the baby names that made gains in the US Top 1000 this year.

Our Baby Name of the Day is Leighton.

My first thought is that Leighton is meant for a girl.

That’s because of actress Leighton Marissa Meester, star of over-the-top teenage drama Gossip Girl from 2007 to 2012.

Meester is still in the spotlight, and Leigh tends to lean feminine. So it’s no surprise that the name has seen steady use for girls.

But the numbers for boys are better than you might expect. In 2010, Leighton cracked the boys’ Top 1000, entering at #925. The name climbed to #919 in 2011, then disappeared. If you were feeling bleak about things, you might put this down to Leighton going girl.

You’re forgiven if you see Leighton and say Lee-ton. But it’s actually pronounced like Clayton without the C – Layton. The spelling Layton is almost exclusively male, and has been throughout the twenty-first century.

That makes Layton a successor to Payton and Peyton, and a cousin to other possibilities like Dayton.

The Leigh- spelling of the name is a place name, found a half dozen places in England. The -ton means settlement, while the first syllable comes from the word for leek. It may have been used to refer to herb gardens, too. There was an eighteenth century painter known as Lord Frederic Leighton, but his title died with him.

The Lay- spelling comes from the word lad – a river or a stream. It’s also a common place name.

As -ton names for boys have rivaled – and possibly replaced ends in -den names – no wonder that both spellings have caught on for our sons.

Leighton: Besides the Map and the Meester

Besides the Gossip Girl, the painter, and the places on the map, there are a handful of other uses that you might recognize:

Leighton has all the makings of a future hit.

The big question is whether Leighton is the new Rowan – equally popular for both genders – or destined to be used primarily for boys or girls. Either way, I think we’ll hear more of this name in the coming years.

What do you think of Leighton? Is it better for a boy or a girl?