Laissez les bon temps roulez! It’s Mardi Gras, and thanks to Leah and Meredith for suggesting a Fat Tuesday-friendly appellation. Back in the seventh century, Landericus was Bishop of Paris. He established the city’s first hospital, now known as the Hôtel-Dieu de Paris. He was way ahead of his time.

His name wasn’t so novel, though. Another Saint Landericus lived in the 400s, also in France, and another seventh century Landericus was Bishop of Metz.

Landericus is the the Latin form of the Germanic Landric, composed of land – land – and ric  – ruler. It’s difficult to say just how common the name was, but I found references to Landry d’Orbec from the eleventh century, so the name was used over several centuries, with Landry the preferred form for every day use.

La Louisiane was named for King Louis XIV of France back in 1682. The territory became part of Spain in 1763, and was purchased by the US in 1803. St. Landry Parish wasn’t formally created until 1807, but French influence is strong. It’s part of Acadiana, the area populated by the descendants of French Canadians expelled from Nova Scotia and the surrounding areas in the eighteenth century.

No surprise, then, that the settlers built the first Catholic church back in 1774, and dedicated it to St. Landry of Paris.

This makes Landry feel both Southern and French – a potential Louisiana heritage choice, though maybe less suitable if you actually live in the state.

Two famous bearers of the surname come to mind.

Then there’s legendary football coach Tom Landry. A Texas native, he became head coach of the Dallas Cowboys in 1960, and stayed for a staggering 29 seasons. His innovative approach helped lead the team to dominance in the 1970s, including two Super Bowl wins in 1971 and 1978.

Even if you’re not into football, odds are that Tom’s name rings a bell, as well as his iconic fedora. After his death in 2000, a stretch of Texas highway, a public elementary school, and the high school football stadium in his hometown were all named in his honor. 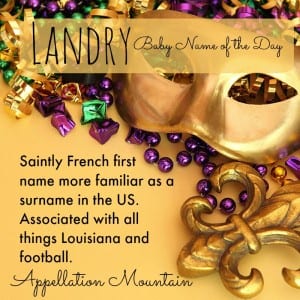 Thanks to the legendary coach, Landry feels a little bit like Brady: an interesting sports-related possibility for boys.

Landry increased in use for both boys and girls after 2000. That’s not all about the coach. But it is all about football.

Critically acclaimed television series Friday Night Lights debuted in 2006. It was based on a nonfiction book and fact-based movie about football in a Texas town. The television series took a more fictional approach, introducing characters not previously heard in Friday Night Lights. One of them was a high school freshman, a boy called Landry Clarke.

And yet, in our era of Hadley, Riley, and Aubrey, it’s easy to imagine Landry in use as a girl’s name, too.

What do you think of Landry? Is it better for a boy or a girl?