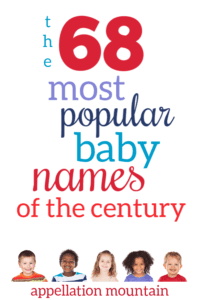 What are the most popular baby names of the century?

It sounds like a straightforward question. Except that there are different ways to measure usage.  Are Steven and Stephen two names or one?  Are we talking about the percentage of the population receiving a given name, or the name’s numerical ranking?  On percentages, today’s #1 name is far less common than the #1 name from a few decades back.

Here’s one measure that seems fairly objective: the US Social Security Administration provides a chart showing those few names that have ranked in the US Top Five at some point for the last century.

It’s an elite group, to be sure.  From 1918 through 2017, only 43 girls’ names have ever risen that high, and just 25 boys’ names.  Call it another indicator of greater volatility and daring in naming our daughters. (Though that’s changing …)

The era matters. Amy, Barbara, or Betty would be rare on a child in 2019, even though they were once ubiquitous.  Liam might feel novel, but that’s likely because it’s only recently entered the elite five.

Let’s look at the 68 baby names to reach the very top of the US popularity charts over the last hundred years, making them the most popular baby names of the century.

The Most Popular Baby Names of the Century: Girls

Abigail – A one-hit wonder, Abigail broke into the Top Five just one, in 2005.

Alexis – Dynasty put this borrowed-from-the-boys name on top in the 1980s and 90s.

Angela – Almost a classic, and certainly a staple for many families.

Barbara – With a long history of use and international appeal, our granddaughters and great-granddaughters might embrace Barbara once more.

Brittany – The famous Ms. Spears is Britney, and she’s made this name feel more pop star than French place name.

Carol – Feminine forms of Charles like Caroline and Charlotte are white hot, but Carol is still the mom on the The Brady Bunch.

Deborah – The Biblical heroine is stuck in style limbo, but, like Barbara, will surely be back.

Debra – Both spellings of this name ranked in the Top Five in the 1950s.  Shades of Aidan/Aiden.

Donna – Oh, Donna. Ritchie Valens crooned the name, and it became one of the most popular picks of the 1950s and 60s.

Dorothy – Dorothy flew somewhere over the rainbow in The Wizard of Oz in 1939, and landed in Miami as one of The Golden Girls by 1985. Today it’s a three syllable, ends-with-y name ready for revival.

Emma – Boosted by many a fictional Emma, including Jane Austen’s heroine, this name feels classic and compact.

Hannah – An Old Testament name with a homespun feel, Hannah ranked in the Top Ten from 1995 through 2007.

Heather – A 1970s staple, the mother of Harper and the forerunner of many a creative botanical name.

Jennifer – Heard everywhere in the 1970s, Jennifer became the default name for a generation of girls.

Jessica – As Jennifer faded, Jessica became the it-girl J name of the 1980s.

Joan – Another Mad Men name, once worn by the heroic Joan of Arc.  Less popular than Jane today, but still a possibility.

Judith – Jude is big for boys. Old Testament heroine Judith could be the new Abigail.

Karen – This tailored, Scandinavian spin on Katherine was most popular in the 1950s and 60s.  If not for that fact, Karen would fit right in with tailored names for girls today.

Kimberly – The heir to Shirley, forerunner of Delaney and Everly.

Linda – Lovely Linda, once the name of a generation – today, firmly in grandmother name territory, except on The Unbreakable Kimmy Schmidt.

Lisa – Once a pet name for Elizabeth, it’s long been an independent name. It sounded right for 8 year old Lisa Simpson when the character debuted in 1987. The Simpsons don’t age, but Lisa sounds more like the mom than the daughter in 2019.

Madison – Madison made a Splash when Darryl Hannah’s mermaid-in-New-York borrowed it from a street sign in 1984.

Mary – Long the top name and undisputed #1, Mary has fallen out of favor. And yet, meet a little girl called Mary today and it feels both classic and fresh.

Melissa – Pretty Melissa would still fit in circa 2019.

Michelle – Once a Beatles song, Michelle is now firmly in mom – and First Lady – territory.

Olivia – A member of the Top Ten since 2001, Shakespearean, elaborate Olivia has now spent a decade straight in the Top Five.

Patricia – Patricia has passed the shamrock to other Irish names, from Erin to Maeve, at least for now.

Ruth – A 1910s and 20s favorite, this vintage, Biblical gem is returning to favor today.

Sandra – Sandra broke into the Top Five just once, in 1947. Today, we know it best as Olivia Newton’s character in legendary musical movie Grease.

Sarah – Rarely has Sarah left the Top 100, and appearances in the Top Ten have been frequent. An evergreen choice!

Shirley – The Ashley of an earlier generation, blame Charlotte Bronte for putting Shirley on the list of possibilities for girls. The famous Miss Shirley Temple helped cement this name as a 1930s favorite.

Sophia – A lovely name with a great meaning – wisdom. With alternate spelling Sofia also popular, it’s the Jennifer of the last twenty years.

Susan – Tailored and spare, Susan would be a hit today, if only it didn’t top the charts in the 1950s.

The Most Popular Baby Names of the Century: Boys

Alexander – Alexander appeared in the Top Five just once, in 2009. A classic choice, made cool by the letter X.

Andrew – Preppy, polished Andrew had a good run, spending over three decades in the Top 20, and remaining a Top 100 favorite today.

Charles – Parents love regal Charles – and cuddly Charlie, too. While it makes a stylish choice today, the name’s Top Five streak happened back in the 1920s.

Christopher – A member of the Top Five fraternity from the 1970s straight into 2001, Christopher feels solidly traditional, even if it’s fading slightly in use today.

Daniel – He of the lion’s den, the heroic Daniel has been a go-to choice for generations.

David – Another enduring classic, though a David born in 2019 is probably David, not Dave. Or maybe just named Bowie instead.

Ethan – A Colonial cool pick, thanks to Ethan Allen, this former Top Five pick was obscure until the 1970s.

Jacob – Jacob long held the top spot in the US – well before anyone had ever heard of Twilight. Biblical and accessible at the same time, Jacob remains a favorite.

James – Among the most classic of names, truly trend-resistant, James ranked in the Top Five from 1880 through 1980, and returned in 2016.

Jason – Big in the 1970s, Jason grew up, married Jennifer or Jessica, and named his kids Jacob and Ava.

John – Like Mary, John has fallen. Long the undisputed #1 name, surname form Jackson is now more popular than the original. But John’s influence remains significant, with many related names in our current Top 100.

Joseph – Chances are you know three or four men by the name, from little boy to senior citizen.  Along with James, Joseph is one of the most enduring choices for boys.

Joshua – A mega-hit from the 1980s into the early 2000s, there’s lots to love about this Old Testament name.

Liam – An upbeat, Irish choice, Liam did what Brian, Ryan, and Kevin could not – make it all the way to #1 on the US popularity charts.

Mason – The descendant of Jason and Michael, an accessible surname name, and the kind of choice that still feels fresh, even after several years in the Top Ten.

Matthew – The names of the twelve apostles make pretty solid choices. (Well, maybe Bartholomew feels a little obscure.) But Matthew works marvelously. Despite peaking in the 1980s and 90s, it feels more traditional than dated in 2019.

Michael – Angelic Michael held the top spot from the 1950s into the 1990s. We think of John as the most popular boys’ name of all-time, but over the last century, Michael actually held the #1 place most often.

Nicholas – The alter ego of Santa Claus, Nick darted into the Top Five just once, in 1999.

Noah – For most of US naming history, Noah fell outside of the mainstream. Then came Joshua. Now it, too, has occupied the #1 spot in recent years.

Richard – Saintly and regal Richard, counts as a classic, even though it’s faded quite a bit since the 1940s.

Robert – Another former #1, Robert ruled in the 1930s. Like Matthew, I think it’s still fresh today, especially if you opt for Rob or Robbie instead of Bob. (Though Bobby does sound awfully sweet …)

Tyler – A brother for Madison, or maybe Mason, Tyler cracked the Top Five in 1993, but only stayed until 1994. It’s still in regular use, but I’d guess the average Tyler is in college right about now.

William – The future King of England answers to a truly enduring name. Once every William was Billy or Bill. Today, they’re more likely to answer to Will. Either way, it makes for a strong name with many years in the Top Five.

Which of the most popular baby names of the century is your favorite?  Are there any that you would still use, despite their former (or current) popularity?  Are you more likely to avoid names that were once popular, or do you only consider current use? 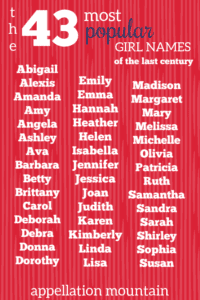 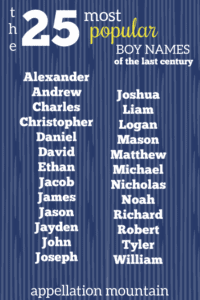