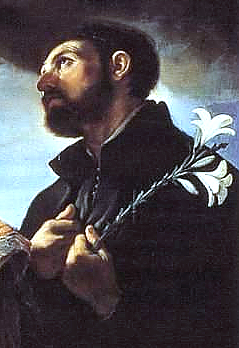 Today’s choice is Hollywood by way of Spain.

Kara’s week kicks off with our Baby Name of the Day: Javier.

Jesuit priest and missionary extraordinaire Saint Francis Xavier has lent his last name to many boys – to say nothing of Charles Francis Xavier, the fictional professor who put the X in X-Men.

How did Francis get the name?  It comes from the castle where he was born.  Today, that castle stands in Navarre, in Spain.  Back in 1506, the castle stood in the Kingdom of Navarre.

There’s a significant Basque speaking minority in the region, and Xavier originally comes from the Basque exteberri – new house – even though parts of the castle date to the 900s.

How do we get from exteberri to Xavier?  Credit the specific dialect spoke in the area in early Middle Ages: Navarro-Aragonese.  A version of it is still spoken today.

Francis Xavier is referred to as Francisco Javier in Spanish.  The castle itself is sometimes given the J spelling, sometimes the X – but the place name is now definitively Javier, Spain.

Back to the saint: he’s a co-founder of the Jesuit order, and went on many a missionary trip.  He died in 1552, while evangelizing in China.  He was canonized less than a century later, in 1622.

There were others with the same last name prior to Francis, but the first instance of Francis as a given name is definitely post-1622.  It may have started with Jesuits taking the name of the order’s co-founder when they took their vows, but by the 1700s, it was common, often as a double name.

The future King Louis XVIII of France was born Louis Stanislas Xavier in 1755.  In Italy, Saviero was in use at the same time.

Javier has a different feel than Xavier.  Plus, while Xavier is typically two syllables, Javier is three: ha vee AIR.

Plenty of high profile figures have kept him in the spotlight – chiefly Javier Bardem.

Bardem was born in 1969, to Spain’s answer to the Barrymore family.  He’s had a varied career, working in Hollywood blockbusters – he’s been a James Bond villain in Skyfall – as well as three Oscar nominations and one win, an Academy Award for Best Supporting Actor in 2007 for No Country for Old Men.  He’s worked in Spanish cinema, too, and racked up tons of awards across the globe.

Add in athletes and artists, among other notables, and there are plenty of reasons to consider this name.  One of the homicide detectives on Castle is named Javier Esposito.

In Spanish, Javier shortens to Javi.

Thanks to Mr. Bardem, I think that Javier would wear well in English.  If Xavier is mainstream, Javier is the dashing import, more daring than the accepted English version, but no less wearable than Luca, Matteo, or Diego.

What do you think of Javier?  Would he wear well in the US?