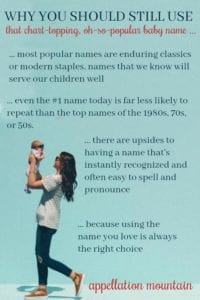 It’s no secret that I love unusual names. Having grown up sharing my name with thousands of girls my age, I longed to be Hepzibah. Or Elodie.

And yet more popular picks can make for great choices, too. Friends of ours just called their darling daughter Emma, and it got me thinking.

So here are Ten Good Reasons to call your baby Ethan or Emma, Liam or Jack.

10. Popular names tend to be great names with universal appeal.

I might like her lots, but Hephzibah is probably never going to make the Top Ten. Read through any list of popular names, though, and surely you’ll find many that appeal. How often have you heard – or said – something like this: “I love the name Olivia. Too bad it’s so popular!”

Unless you decide to name your daughter Emmalie, one advantage of a common name is rarely having to correct others. Plenty of us wear cumbersome last names. If you’re constantly spelling Niedalkowski, maybe having a first name like Ava is a good idea. And if you’re crossing cultures, sticking with a simple pick might be wise, too.

This probably wouldn’t happen with Charlotte or Mason – we expect to meet children with those names. Yes, everyone will eventually remember that your son is called Eben, not Evan or Ethan or Benjamin. But be prepared to smile lots until that happens.

7. Even a #1 name is less popular than it ever was in prior generations.

There is not a single girl called Harper enrolled at my daughter’s elementary school. There are no boys named Noah.

In 1908, over 5% of boys were John and more than 5% of girls were Mary. In 1978, nearly 4% of boys were named Michael, and over 3.5% of girls were called Jennifer. Today, a mere 1% of all children born each year receive the most popular name, and the percentage will probably continue to drop.

6. Some of the most popular names might still sound novel.

Name your daughter Jennifer today, and odds are good she’ll be the only Jenny in her class. “But,” you protest, “I knew so many Jennys growing up! I want something unusual. Like Scarlett.”

As it happens, Scarlett is rising fast. But today’s parents certainly didn’t grow up with a Scarlett, and that might be all that matters.

5. Some of the most popular names might be truly enduring.

If you love the classics, why not use Elizabeth and James for your children? Sure, they’ll know others with their name. But they could hop in a time machine and probably meet another James or Elizabeth throughout much of history.

It’s hard to argue that Grace or Henry is trendy, even if they’ve recently been popular.

Madison will, inevitably, fade from use, and all of those Jaydens? Some day their names will scream thirty-something and, eventually, octogenarian.

But other names age gracefully. Amanda and Martin are far from their heyday, but remain perfectly reasonable – even sensible – picks for a child.

3. Some kids embrace being one of many.

I once met a Kate who grew up with a best friend called Katie. They loved having the same name, even mashing it together to call themselves the Katie-Kates. There must be similar stories on every playground in America.

Just because I hated growing up with a Top Ten name doesn’t mean your child would mind being Jack T.

2. There are no guarantees that an uncommon name will stay that way!

The year is 2001. You choose the stunningly unusual Aria for your daughter.

Fast forward to today, and every time you call your teenage daughter’s name at the mall, preschoolers’ heads turn. (Your teenager, of course, does not answer, because you’re embarrassing her.)

Today’s fashionable, but obscure choice – think Elora, Antonella, or Wren – could be just one celebrity birth announcement away from the Top 100.

Maybe you’ve always wanted to name your daughter Emma, after your favorite book. Or maybe William was your beloved grandfather’s name. If that’s the case, their popularity doesn’t matter one bit. The name will always feel just right.

What do you think? Would – or did – a name’s ranking in the Top Ten stop you from using it?