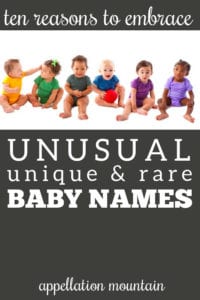 When it comes to choosing a name, most parents aim for the middle. Not the Top Ten, but not something completely novel, either.

But just as surely as there are good reasons to use a common name, there’s a case for embracing unusual ones, too.

Let’s look at ten reasons unusual names are worth considering.

10. More of us have unusual names now than ever.

If you follow the statistics issued by the Social Security Administration, you might have heard this rule of thumb: less than 75% of all names given in any year are represented in the Top 1000. Dig a little deeper, and you’ll notice that the percentage seems to be inching down over time.

9. Fewer of us have the most common names.

The flip side is that fewer of us receive the most common names.

Even among those children who do receive a Top 1000 name, there’s a broader distribution across those thousand choices.

In the 1920s, more than a quarter of all newborn boys received one of the Top Five names – Robert, John, James, William, and Charles. About 15% were Mary, Dorothy, Helen, Betty, or Margaret.

Numbers like those are unthinkable today. During the early 2000s, only Jacob, Michael, Joshua and Matthew commanded more than 1% for boys. For girls, only Emily could claim the same.

As of 2019, just Liam and Noah represented 1% or more of all births, and only Olivia crossed the 1% threshold for girls.

Combine those two factors, and the world starts to change. It means that most of us have become accustomed to hearing more names – and more unusual names, too.

Some will consider a name like Oakleigh too trendy, or dislike the unconventional spelling of Jaxx. But do they really seem bizarre? Unthinkable?

They seem pretty normal … at least by today’s standards.

The more we become accustomed to uncommon names, the more they seem familiar – even when we hear a name for the first time.

We often forget that this has always been true. Kathryn or Catherine? Stephen or Steven? Plenty of long-standing names have perfectly valid variant spellings.

A few years ago, I helped out at a nursery school holiday party. We had to label their craft projects, and, of course, the parents didn’t know all of the children’s names. Instead of saying names, the head teacher spelled out C-A-Y-D-E-N and M-A-D-A-L-Y-N, occasionally pausing to make sure she had it exactly right.

If we can send Kaiden and Cayden home with the right hand-print turkey projects, then Persephone and Caspian will learn how to spell their names, too.

6. Definitions of masculine names are far broader than they were once.

The pool of girls’ names has traditionally been deeper. Some of it comes down to acceptable endings: Cecilia and Cecily and Cecile all work, as do Julia, Julie, Juliana, Juliet, Juliette, and Julianne … but there’s only Henry and Julian.

But that’s changed dramatically over the last few decades.

Names defined by longer, softer sounds, like Sebastian and Elijah, now dominate the boys’ Top 100. Of course, Maverick and Hudson are popular, too.

Whether your son’s name seems better-suited to a romantic poet or an action hero, chances are he won’t suffer for it. After all, we’re used to soulful musicians named Bruno and football stars answering to Payton.

5. Name choices tend to reflect our backgrounds and lifestyles, not dictate them.

Being named Chicago is probably not the strangest thing about being Kim Kardashian’s daughter. People would be curious about Reese Witherspoon’s youngest even if she’d named him John instead of Tennessee.

Unusual names tend to reflect the values and preferences of our households and communities. It’s easy to assume big cities with diverse populations are hotbeds of distinctive name choices – and there’s some truth to that. But New York and San Francisco don’t have a lock on inventive and inspired naming.

Some argue that sticking with the classics is the best way to give your child a leg-up when she applies to Harvard. Or when he interviews for a job at the White House. Every now and again, a study pops up explaining that girls named Kate fare better than those called Bertha or Starlee.

Parents want their children to succeed, so this feels like a valid concern.

And yet, if you’re an employer eager to hire a diverse workforce or an admissions officer looking to compose an inclusive incoming class, why wouldn’t you interview Deonte along with David, Yasmeen as well as Ava?

Names like Rascal or Jezebel can seem limiting. But those represent extremes. Most parents are likely to pick names that fall somewhere more in the middle, names that won’t consistently work against their children.

And if a first name does feel a little risky? Pairing it with a rock solid classic in the middle spot can balance out even the most outrageous first name choice. Misty Rain reads a little like a stage name. But Misty Elizabeth? She has options.

3. Personalized, customized products are just a tap away.

When my kids were little, they knew brothers named Connor and Ronan. Connor had a personalized license plate for his bike. Ronan did not.

This sometimes comes up as a reason to eschew unusual names. And hey, if you were a Rhiannon shopping for back-to-school supplies circa 1993, maybe it was easy to be jealous of the personalized pencils available to Jessica, Ashley, and Sarah.

But here’s the thing: arguing that your kids will never find a personalized whatever with their unusual names suggests that you can only stick to the Top 100 – or maybe even 50 – favorites. Because those key chain racks still exist, and there’s only so much space for choices. Name your kid something even a little different – Peter, say, or Hope, and they’re out of luck.

Besides, we live in the Golden Age of custom. Almost ten years ago, I remember being relieved that I could program my daughter’s LeapFrog Puppy Pal to say her name – Clio – just as easily as it would say Emma. And that was before the Etsy app lived on my phone, with infinite customization just a few taps away.

I grew up with a truly unusual last name, a Polish import simplified in an attempt to make things easier in America. After I’d spelled it out, inevitably I had to explain its provenance. (“It’s Polish. My step-grandfather’s family simplified the spelling in the early 20th century …”)

When I married a man with a far simpler, mostly phonetic surname, I leapt at the chance to simplify every introduction.

But you know, I do sometimes miss my conversation-starting surname.

Both of my sisters kept it when they married – again, to men with marvelously straightforward surnames.

If there hasn’t been a widespread movement to get us all to adopt streamlined surnames like Smith and Jones, why would we expect to all answer to Henry and Emily?

1. An unusual name with meaning beats an ordinary one chosen just because.

Plenty of us give our children names without layering meaning and significance on every syllable, and that’s fine.

But when a name has meaning – when it honors a great-grandmother, or evokes the place you met your partner – even the most outlandish choice can seem like the logical, correct and inevitable option.

Did you choose unusual names for your children? Did any of these considerations give you pause?

First published on April 5, 2010, this post was revised substantially and re-published on February 3, 2021. 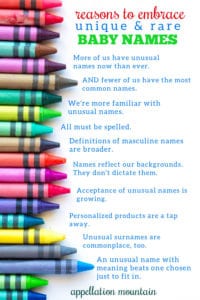