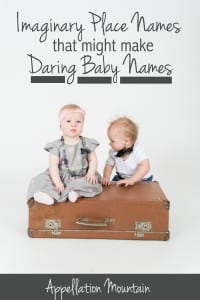 Not every every imaginary place name, of course. Bedrock and Gotham and Agrestic? They’re pretty much out.

But with real world place names like London and Brooklyn, Camden and Savannah all so popular, maybe it’s not outlandish to imagine that some imaginary place names could join them.

Depending on the name, it might be instantly recognizable. Or it might only draw attention from other fans.

Read on for some of the best imaginary place names that might just work for a real child.

James Elroy Flecker wrote mainly poetry, but he penned a few novels, too, including 1914’s King of Alsander. According to Forgotten Books, Alsandar appears to be a kingdom in Southern Europe. That’s not much, but the Alice-Alexander hybrid sound appeals.

Shakespeare’s As You Like takes place in the Forest of Arden. Strictly speaking, the forest is a real place, in Warwickshire. But the version of the woods used by the playwright is pure fantasy, more literary device than location on a map. Arden is also the maiden name of William’s mother, Mary Arden Shakespeare.

Arendelle might be the most famous of the fictional place names of the twenty-first century. It’s the kingdom Elsa inherits in Frozen, inspired by Norway. Arendelle succeeds for several reasons. The -elle ending brings to mind Annabelle and Isabelle, and Aren feels an awful lot like 1980s favorite Erin. Plus, we’re big on Ar- names for girls like Ariana and Aria right now.  It could make for an unexpected middle, and there’s no reason it wouldn’t be a wearable first name, too.

The mythical location in the legends of King Arthur has inspired real places. There are Avalons in New Jersey and California. But the island was first discussed in Geoffrey of Monmouth’s 1136 Historia Regum Brittaniae. Geoffrey claimed Excalibur was forged there. It’s the place King Arthur retires to after fighting in the Battle of Camlann. It means “apple island,” from the Welsh aball or Breton a val. Avalon fits in nicely with our affection for names like Ava and Adalynn.

Speaking of names inspired by our affection for Ava, how about Avonlea? Lucy Maud Montgomery created Avonlea for Anne of Green Gables, though she based it on real places, and set it on the very real Prince Edward Island. Avonlea ranks among the most popular of imaginary place names, with 75 births in 2020 alone.

Cecily is a real name, and Sicily is a real place. But Northern Exposure invented Cicecly, Alaska. Of course, there’s also Cicely Tyson, the Oscar-nominated actress. When her career took off in the 1970s, Cicely briefly charted in the US Top 1000, in 1973 and 1974. As for Northern Exposure, the 1990s series racked up Golden Globes and Emmys, but is probably far enough in the past that few would associate Cicely with the series today. It’s also a plant name, and considered a variant of Cecily.

Star Wars seems like an obvious source of imaginary place names. But Alderaan or Coruscant or Tatooine? Not so much. Corellia, the home planet of Han Solo, is mentioned in the original 1977 film, and features in the 2018 movie, too. It’s not exactly a garden spot, but the sound appeals.

Years ago, I read a novel where one of the main characters wanted to name her daughter Corinthia, only it turned out she had a boy instead. William Faulkner used the name for a character, and, of course, Corinth is a place name from Ancient Greece. But it makes this list because Harold MacGrath’s 1901 The Puppet Crown was a huge bestseller and eventually became a silent film in 1915. Corinthia was the fictional kingdom, home to Princess Alexia, played by Ina Claire in the  movie. While I couldn’t find much about novel, I’m intrigued by Corinithia. It fits with Cora names, with long names for girls, and of course, with imaginary place names, too.

Fans of The Princess Bride – both the 1973 novel and 1987 movie – know that it opens on Buttercup’s farm in the country of Florin. Florin was inspired by the name of a currency; it was first a gold coin minted in Florence, Italy in the thirteenth century. (The other fictional country in the story is Guilder, as in a Dutch gold coin.) Florin ultimately comes from the Latin florem – flower. The symbol of Florence was a fleur-de-lis. This makes Florin a pan-botanical name, and perhaps a clever middle for fans of Buttercup and Westley.

It sounds like a mix of Gregory and Jeffrey. Instead, Gallifrey is a fictional planet in the Doctor Who universe. In fact, it’s the home of the Doctor. The planet was first mentioned in 1969, and the history has been filled in over the course of the long-running sci fi series – with most of the story coming in more recent years.

In Meg Cabot’s The Princess Diaries, Mia Thermopolis is an average high school student who finds out she’s the heir to the throne of a tiny European country. The original novel was published in 2000, and the 2001 film adaptation Anne Hathaway a star. It’s a seriously picturesque destination in the movie. As names go, Genovia is part-Geneva, part-Olivia.

Yvelise or Ivelisse surface in Italian and Spanish, but seldom in English. And then there’s Ivalice, a fictional kingdom created for the Final Fantasy video game series. It’s not the old place name in the long-running series – first created in 1987.

An ancient territory called Illyria once covered most of the former Yugoslavia, as well as Albania. The Greeks and Romans named the tribes and the territory after Illyrius, a character from Greek myth. It’s been revived many times over the centuries. Shakespeare used it as a fictional setting for his play, Twelfth Night. Jean-Paul Sartre did, too. Lloyd Alexander sent his young heroine, Vesper Holly, on The Illyrian Adventure in 1987. It’s perhaps the ultimate imaginary place names name.

In 1955’s King’s Rhapsody, Errol Flynn played the King of Laurentia. The film was based on a 1949 musical by Ivor Novello. Both are mostly forgotten now, though Laurentia is almost a real place on the map. The ancient Laurentian mountain range in Quebec goes back perhaps 1000 million years. In the 1930s, the Quebec independence movement favored the name Laurentie for their proposed country.

J.R.R. Tolkien’s The Lord of the Rings universe could add dozens of choices to the imaginary place names list, but Rohan stands tall. It has all of the complex history of any Tolkien creation. It also has roots in the real world. The House of Rohan is a French noble family based in Brittany, influential over many centuries. It’s also a given name with Sanskrit roots meaning ascending. In Tolkein’s Sindarin language, it means “horse country.” That means that Rohan doesn’t immediately signal fandom, since there are so many other associations for the name. And it’s just a little bit different from current rising favorites, like Rowan, Roman, and Ronan, for boys.

It’s the fictional Pennsylvania town that’s home to Pretty Little Liars. It’s based on a real Philadelphia ‘burb called Rosemont. There’s a shopping mall and a high school, and all the necessary features of a suburban town. Of course, rosewood is also a type of wood, valued for its rich color. It might make an intriguing middle.

This might be way too much to live up. After all, Valhalla isn’t exactly a fictional place – it’s more like Mount Olympus from Greek myth, a location that was once an important part of a belief system. In Norse mythology, Valhalla is Odin’s great hall in Asgard, a sort of paradise for fallen warriors. It also brings to mind Led Zeppelin, the current incarnation of Marvel’s Thor, and dozens of real world places named after the mythological location.

Now it’s your turn! Which imaginary place names did I miss? Are there any that you would consider for a child? 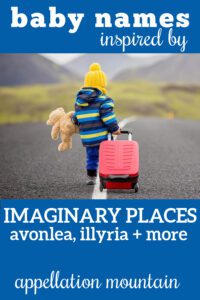