How did this name go from presidential stalwart to furry and blue?

Our Out-There Baby Name of the Day is Grover.

Back in 1837, Richard and Ann Cleveland welcomed their fifth child.  They named him Stephen Grover in honor of the very first pastor of First Presbyterian Church of Caldwell, New Jersey.  Dad was serving as the second pastor of that church at the time of his son’s birth.

By the time he reached adulthood, Stephen had shed his commonplace given name for his less familiar middle, and embarked on a political career.  In 1884, the year Cleveland was elected President of the United States, Grover skyrocketed to #20.

And yet Grover wasn’t completely unheard of pre-president.  The name ranked in the US Top 500 in 1880, and would remain there through the 1950s.

Drop the ‘r’ and maybe you’ll see this name in a different light.  It comes from the Old English graf – grove of trees.

Or maybe it’s an occupational name for a ditch digger, or a place name for someone who lived in a hollow.  But let’s stick with the arboreal meaning, shall we?

It puts Grover in the company of names like Forrest and Rowan.

He calls himself “lovable, cute and furry” and he’s been with the venerable children’s show since early days, though Grover as we know him now didn’t officially appear until the show’s second season.

This means that anyone who grew up from the 1970s onwards – in other words, anyone having a baby today, has Grover filed next to Kermit and Beaker as Muppet names, not potential names for a child. 2002 bestselling novel The Nanny Diaries put young college graduate Annie in charge of four year old Grayer.  In 2007, it became a movie with a young Scarlett Johansson as the nanny.

Her charge was called Grayer, but Annie nicknamed him Grover.

If you think about the names of the other privileged children in the story, Grayer was pitch perfect – and Grover wasn’t so far off: Darwin and Tinford, Lulu and Cristabelle.

Grover: Cautiously Ready for a Comeback?

Here’s the thing about Muppet names: when they were chosen in the 1970s, they were the names of senior citizens. 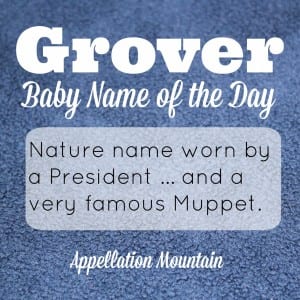 No one in Sesame Street’s target audience answered to those names, but their grandparents?  Possibly.

So if Everett and Chester feel like edgy, cool up-and-comers, it seems likely that other names from that generation could follow.

Another point in his favor?  The successful Percy Jackson series includes a character called Grover Underwood.  The same generation of kids who know Grover as blue and furry also know him as a heroic creature from myth.  So that’s a plus.

It would take a daring namer indeed to consider Grover, and yet chances are that this name would wear very well in 2015.