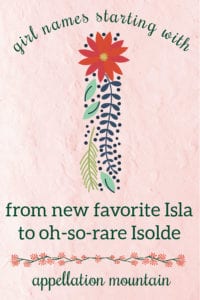 Girl names starting with I fit right in with so many vowel-forward choices.

After all, A is the most popular letter for girls’ names, with E right behind. The letter I ranks fourteenth – about midway through the alphabet.

And yet, there just aren’t that many girl names starting with I. And, unlike Amelia/Emilia or Olivia/Alivia, relatively few girls’ names can swap an I for another vowel – at least as the first initial – without changing pronunciation.

(I and Y can often swap places … but given how rare Y is, that doesn’t really change much.)

And so I names for girls remain a pre-curated set. While some of these choices are true chart-toppers – including a former #1 name! – plenty of rare gems await, too.

Read on for some of the most intriguing girl names starting with I.

Isabella is the chart-topper, but the one-syllable shorter Isabelle has had a good run, too.

Isabelle road Isabella’s coattails, and the same is true for the slightly sparer Isabel.

A creatively-spelled spin on Isabella.

A Swahili word meaning faith, Imani is also the seventh principle of Kwanzaa.

It might be a version of Ixchel, a Mayan goddess name.

A feminine form of Ivan, that makes Ivanna one of many names related to the enduring John.

A mix of Avery and Ivy, Ruby and Aria, Ivory is musical, colorful, and with a stylish sound, too.

A traditional favorite with a powerful meaning: peace.

A sparky, spirited name in the key of Sadie, one that suggests independence.

Likely a cousin to Itzel, influenced by the popularity of longer, -ana and -anna endings.

It could be a spare spelling of Isla, but Ila also means “earth” in Sanskrit. The name appears in Hindu legend as both masculine and feminine.

In several languages Elias and Elijah are spelled with an I instead of an E. Iliana evolved as a feminine form of Elias in those languages, but it could also be invented in our Eliana/Lilianna moment.

Most often a phonetic spelling of Isla, influenced by the popular Ayla. But in at least one case, it’s different. English pop star Steve Hart and actor Ashley Scott named their younger daughter Iyla Vue – “I love you” – in 2015.

VINTAGE GIRL NAMES STARTING WITH I

A mini name with Germanic roots, Ida had a good run in the nineteenth century, thanks to a Tennyson poem turned Gilbert and Sullivan musical.

Ida meets Bella. This vintage choice ranked in the US Top 1000 every year from 1880 into the 1940s, before heading for obscurity.

This may have started out as a typo, or it might’ve been a deliberate re-naming by Shakespeare, Imogen comes from Innogen – maiden.

Another mini name, Ina could be short for any name ending with -ina. Or it might stand on its own, as in Food Network’s celebrated chef Ina Garten.

A place name with a surprisingly long history of use.

A gorgeous Scandi name with a strong sound and glam image, thanks to Hollywood Golden Age star Ingrid Bergman.

Likely Scottish in origin, Iona was the Isla of the early twentieth century.

A logical substitute for Isabella, Isadora means “gift of Isis,” as in the Egyptian goddess. Dancer Isadora Duncan is another worthy reference.

From Ida to Iva, another mini name with potential appeal for parents seeking minimalist choices. Iva has multiple origins and meanings, including yew tree, willow tree, or maybe even a feminine form of John.

RARE I NAMES FOR GIRLS

A mermaid-like creature from Brazilian folklore, and cousin to fast-rising Yara.

A weather-related winter name, regularly in the US Top 1000 in the late nineteenth and early twentieth centuries.

A rare name with multiple origins, and a lovely sound.

A medieval English form of a Norse goddess name, related to springtime and renewal.

The ultimate mini name, a borrowing from Greek myth and one of the moons of Jupiter.

Another I name for a daughter borrowed from a Gilbert & Sullivan musical, this time related to violets.

A gorgeous medieval variant of Isabelle.

A rare and ancient name inspired by a region in Asia Minor, Isaura feels a little like Isabelle meets Laura.

A princess from the medieval tales of Arthur, a name that’s just barely familiar, but seldom heard.

What are your favorite girl names starting with I? 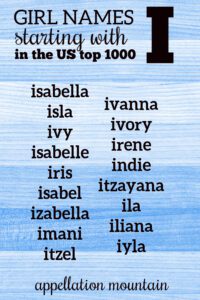 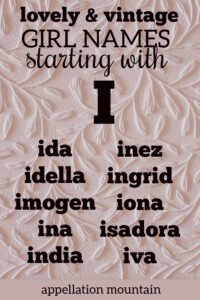 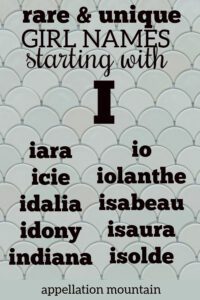 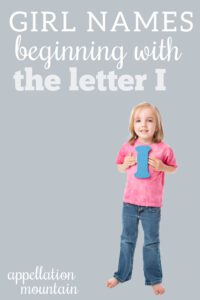