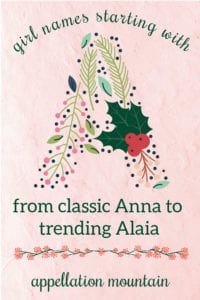 Looking for girl names starting with A?

It’s the single most popular first initial for our daughters in recent years. It leaves runners-up E, M, and S in the dust.

In some ways, that’s nothing new. Anna, Anne, Annie, and Ann alternated their tours in the Top 100, and many appeared in the Top Ten. Classic choices like Abigail and Alice enjoyed their time in the sun, too. But today, it’s not just the traditional picks. In facts, the Anns are at something of a lowpoint, and names like Agatha and Antonia fail to make the current Top 1000 at all.

Instead, A names for girls span every style. From stylish mini names to vintage revivals, intriguing imports to elaborate romantics, there’s no shortage of possibilities beginning with A.

Read on for more girl names starting with A, from the current chart-toppers to names you might not have considered.

MOST POPULAR GIRL NAMES STARTING WITH A

These are the most popular girl names starting with A, based on births in the calendar year 2019. (Check the full list for yourself here, at the Social Security Administration’s name site.)

Short on letters, big on style. Ava carries all the glamour of Hollywood’s Ava Gardner, but still feels spare and minimalist. Bonus? It’s a palindrome: spelled the same forwards and backwards.

Sweetly vintage, Amelia was popular in the late nineteenth century. But it’s even more popular today. Perhaps it’s the combination of antique style with the image of high-flying, world-changing aviator Amelia Earhart.

A long-time Top Ten name for girls in the US, nearly every Abigail is actually an Abby. It comes with a great meaning, too: my father is joy.

Surname Avery was nearly unknown until the late 1980s. That’s when we met Avery Brown, mother to fictional journalist Murphy Brown. After Murphy named her son after her mother, Avery rose for boys and girls alike, but today it’s far more popular for girls.

Musical Aria hits all the right notes. It’s a lovely liquid name reflecting the sound of our times. It fits with so many word names, from Willow to Grace. And the one-two punch of Pretty Little Liars and Game of Thrones introduced it to lots of parents.

The Roman goddess of the dawn, Aurora has a long history of sparing use. But it’s never been more popular than it is today.

A 1972 song by Bread transformed Aubrey from sometimes-heard male name to fast-rising favorite for girls. It entered the Top 100 in 2006, long after the song faded from playlists.

A logical successor to Allison and Madison, Addison soared into the Top 100 back in 2006. Add in alternate spellings like Addisyn and Addyson and it’s even more popular than the current rankings suggest.

With all the charm of Hollywood icon Audrey Hepburn, this name feels like a modern traditional choice for a daughter.

A classic among classics, Anna is currently the reigning Ann- name. And yet, even as a Top Ten name, it feels surprisingly rare.

HOTTEST GIRL NAMES STARTING WITH A

We love girl names starting with A. In terms of raw numbers, Alaia, Amelia, and Arya numbered among the fastest rising girl names as of the last popularity update. But which A names for girls gained the most spots on the Top 1000 charts? Here are the ten biggest gainers.

For ages, Adele the singer topped the pop charts, but Adele the name? It languished, even as other girl names starting with Ad- boomed. Addison hovered just beyond the Top Ten, and Adeline – pick your spelling – was everywhere. But now it’s spare Adele on the rise, an alternative to equally classic Alice. (The names are actually cousins.)

It gets even better. Alaya, which could be a twist on Alaia or Aliyah, also leapt up the charts this year.

And, of course, so did Alayah, which fits into the same broad category as Alaia and Alaya. All three names span multiple cultures, the kind of effortlessly international name that parents often search for now.

But wait, there’s more! Alia also gained dramatically – and could be a cousin to some of the names listed above, or even a name with Germanic roots.

The feminine form of Amir, an Arabic name meaning prince. Amira, at #281, is more popular. But the add-an-h spelling is gaining fast.

It could mean love – or blackberry, depending on your language. But I’d guess that the affectionate meaning is the one driving Amora up the popularity charts.

Typically masculine in Hebrew, mini name Ari feels a little different in the US these days. After all, Top 100 staples Aria and Ariana both start with the sound.

A Norse name, Astrid has been boosted by everything from How to Train Your Dragon to Vikings. It survived a trip as a punchline on The Office, and now it’s a strong, just slightly unconventional choice.

RARE GIRL NAMES STARTING WITH A

What if you love A names for girls, but want something just a little different? These ten names might satisfy. None appear in the current US Top 1000.

For every chart-topping surname name like Avery or Addison, there’s an Adair. Originally a Scottish form of Edgar, that connection isn’t well-known – or particularly obvious. And if you’re after something bold for your daughter’s name, the “dare” sound makes this one doubly appealing.

The name of a Scottish river immortalized in a Robert Burns poem, Afton has flowed into greater use as a girls’ given name over the years. A little bit literary, with ties to the natural world, few names hit the same sweet spot as Afton. As a bonus, Burns’ poem has been set to music, most recently by Nickel Creek.

Fellow virtue name Felicity ranks comfortably in the US Top 500 – but it had a saint and a television series to boost familiarity along the way. But Amity offers a great meaning – friendship – and an equally appealing sound.

If you know your Latin – or Spanish or French – you can unpack Amoret. It comes from amor love. Poet Edmund Spenser invented it for his 1590 epic poem The Faerie Queene. It’s seldom heard as a given name, but fits right in with Juliet and Scarlett.

An Arabic name meaning friendly, Anisa is rare in the US, but heard elsewhere in the world. It’s sometimes spelled with a double ‘s’ but that might confuse the pronunciation. Anisa rhymes with Lisa.

We love Annabelle and lots of other Ann- names, so how about Annemor? It’s an import from Sweden and Norway, only used since the middle of the twentieth century. The first syllable is the classic Ann; mor means mother.

Another word name possibility, arbor comes from the Latin word for tree. While it more commonly refers to a garden now, the annual observance of Arbor Day keeps the meaning top of mind. Arbor fits with similar-sounding Harper, as well as nature names like Willow and Rowan.

Mythological names are having a moment, and the image Artemis feels well-suited for our times. She’s a fearless female warrior, skilled with a bow and arrow. But there’s a softness to the name, too.

Okay, it could be mistaken for Atlanta, the city in Georgia, time after time. But the Atalanta of myth has a great story to tell. She refuses to marry unless she can find a husband who can outrun her. In other tales she sailed with the Argonauts and hunted a wild boar.

A mystical island paradise in Arthurian legend, Avalon has been borrowed as a place name over the years. It’s also a famous Roxy Music album, and very occasionally, a given name.

What are your favorite girl names starting with A? 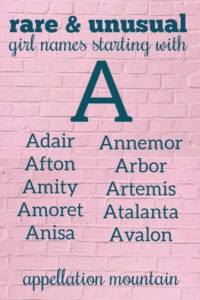 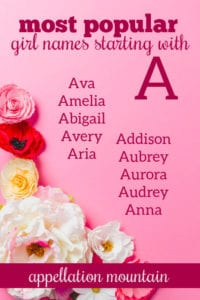 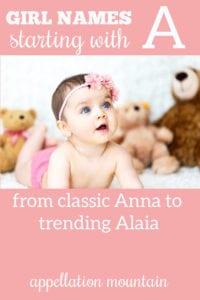