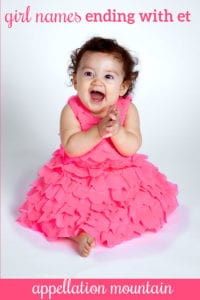 Girl names ending in et are the It Girls of the twenty-first century.

The term “It Girl” dates to the early 1900s. Clara Bow was called an It Girl. So were Diana Ross, Ali McGraw, Winona Ryder, Halle Berry, and more famous faces. They were rising stars, known for their beauty as well as their fame.

But while their names run the gamut, girl names ending in et and ette share certain qualities.

They sound distinctively feminine, but not nearly as frilly as the girl names ending with lia or ella.

The ette ending girl names tend to be French, but names on this list come from all over the world.

They’re the leaders of the pack, the most popular of the group.

We all recognize Colette, short for Nicolette, which comes from Nicole. But it’s far less common than some of the et options, which might make it even more appealing.

Add them together, and Juliet/te is a pretty popular name. Juliette ranks in the Top 200 and is climbing fast; Juliet follows in the Top 300.

Does it count as an et name? Let’s say yes, because it’s a classic that benefits from the distinctive ending sound.

Speaking of It Girls, Scarlett Johansson put her colorful name on parents’ radar.  Scarlet and Scarlette are seen, too, but the -ett ending is undeniably tops.

Another favorite -et ender, Violet has been boosted by botanical and color associations. And, of course, there’s Downton Abbey’s delightfully acid-tongue Dowager Duchess.

Many of these names have had a good run in the past. Some of them could be ripe for revival! Others wait just beneath the radar, emerging possibilities that could be the next big thing.

A Baby Boomer name, thanks in part to the most famous Mouseketeer, the late Annette Funicello.  It’s a French diminutive for the classic Anne.

Sofia Coppola’s 2006 movie showed us a different side of Marie Antoinette. But literary Antonia and elaborate Antonella are the favored feminine forms of Anthony right now.

Saintly and, thanks to The Big Bang Theory, brainy, Bernadette peaked in the 1940s. Rich with nicknames and boosted by the et ending, it feels like a candidate for revival.

Irish heritage picks like Maeve are climbing. Bridget, Bridgette, Brigitte, and other forms of this international name remain surprisingly rare.

If silver screen names like Ava and Audrey appeal, then why not Claudette? Claudette Colbert starred in many a Hollywood favorite, earning an Oscar for It Happened One Night in 1934.

From the pages of Les Mis to Broadway and the big screen, Cosette probably has origins in an affectionate nickname, rather than a given name.  But if Colette and Cosima are possibilities, why not Cosette?

Danielle remains the most popular feminine form of Daniel, but Danette has seem some use, too.

A name invented for stone age fantasy flick 10,000 BC, Evolet is “the love” spelled backwards, minus the h. With Everly, Evelyn, and more Ev names for girls rising, Evolet holds some promise.

Georgia is a favorite for many parents, but add the -ette ending, and this feels like a sparky, retro alternative to Juliette. Nicknames Gigi and Georgie are a plus.

A feminine form of Henry less elaborate than Henrietta, Harriet feels sensible and grounded. Nickname Hattie ranks in the US Top 1000, but Harriet might not be far behind.

Janet Leigh was the It Girl of an earlier generation, her star turn in Psycho impossible to forget. Then came Janet Jackson. But this feminine form of John peaked in the 1940s, making Janet more likely to be the grandmother than the newborn today.

The French Jeanette must have been the height of glamour in the 1930s.

Originally a pet name for Elizabeth, this name made waves when the Duke and Duchess of Sussex welcomed daughter Lilibet Diana in June of 2021. Her great-grandmother is, of course, Queen Elizabeth – who was called Lilibet as a child.

A frilly French diminutive of Marie, it was the name of Catherine Zeta-Jones’ character from The Darling Buds of May. The story was that Mariette’s dad wanted to name her Marie Antoinette, but decided it was a bit much – so they smooshed it together and came up with this instead.

No, No, Nanette became a Broadway hit in the roaring 20s. Nanette was the It Girl of the musical romp, and it was a good choice – nicely ahead of the fashion curve, popularized by the musical and a pair of big screen adaptations. Today Nanette feels vintage – and, possibly thanks to fashion designer Nanette Lepore – not quite so dated.

An elaboration of 1980s favorite Nicole, actor Nicollette Sheridan kept her name in the spotlight.  The name’s peak coincides with her star turn as Paige on Knot’s Landing in the 90s.

Odette has graced the lists of hipster baby names, and it has an effortlessly cool vibe. The name of the white swan in Swan Lake as well as a hero of the French Resistance during World War II, Odette is authentically French and nicely artistic. It’s daring, but wearable in our age of girl names ending in et.

This one is a little more common than Danette, but another example of the -ette as feminine ending. Ziegfield Girl-turned-Hollywood actress Paulette Goddard – born Marion Pauline – lends it some retro glam.

French and frilly, and reminiscent of Crêpe Suzette – a recipe calling for liqueur and a lighter – Suzette might be less wearable than Susannah today.

Also spelled Ivette, it’s as authentically French as Odette, but has more of a mid-century vibe.

They’re daring, even daffy.  But some of them could wear well in 2014’s anything-goes naming environment. P.S. If the name appears in blue, click it to read the complete Baby Name of the Day post for that name!

The French word for a meadow lark, Alouette is familiar to all from the children’s song.

A flower name much less familiar than Lily or Rose.

A sparkling gemstone name, Garnet comes in many colors – though we often think of it as dark red. That brings to mind et ending chart-topper Scarlett.

Kismet would make a bold name, but then again, Destiny has been a popular choice for girls in recent years. It means fate, from the Arabic qismah.

Bird names are big, and Linnet could fit right in with Lark and Wren – a small songbird.  Of course, Linnet also feels like a respelling of Lynette, which is less like a modern noun name and more along the lines of Annette and Jeanette.

Literally literary names are a trendlet, with kids answering to Story and Legend and Fable, too.  Why not Poet? Soleil Moon Frye has a daughter named Poet Sienna Rose – and a son named Lyric.

Another word name, a type of poetry. Sonnet might be one of the most wearable rare girl names ending in et.

Enid Bagnold gave this name to a young heroine in her 1935 novel National Velvet.  In 1944, a very young Elizabeth Taylor rose to stardom in the role. But it wasn’t until the television adaptation in the 1960s that Velvet had a moment of popularity as a girls’ name, appearing in the US Top 1000 from 1961 through 1964.

If Kismet and Velvet aren’t out-there enough for you, here are some more girl names ending with et, all of which are rare, rare, rare.  P.S. If the name appears in blue, click it to read the complete Baby Name of the Day post for that name!

An uncommon form of Adelaide, Alette feels light and airy.

A French name from a Greek work meaning invincible.

Another Hebrew name, this one sounds a little bit like “I yell it” and means gazelle.  But there’s a celestial aspect to Ayelet, too.  The morning star is also known as the “gazelle of the dawn.”

It looks like a creative spin on Elliott, meant to make it feminine. But it is a French name, from their form of Elijah.

There’s Elizabeth and Isabella and the Italian Elisabetta. Isabette is rare, but a possibility in our age of Isobel and Eliza.

It’s most likely a form of the Arthurian Eluned, but with Luna in vogue, it seems like another moon-inspired name.

Maret is a contracted form of Margaret, also spelled Marit, and heard in Scandinavia and the Baltic states. While this name has never cracked the US Top 1000, it feels spare and modern, but carries all the history of the regal, saintly Margaret.

A sweet name, a spin on the super-popular Mia, but also a French word meaning crumb.  It’s used as a term of affection, and there’s a lively debate about whether Miette is too cutesy and dismissive to be used as a child’s name.  Think of it as a form of Mia, though, and there’s less of a concern.

In Spanish, the Arabic Jamila – beautiful – becomes Yamila.  And Yamilet – as well as Yamileth – are variant forms in use in Latin America.

What do you think of girl names ending in et?  Do you prefer ette?  Are there any names missing from this list? 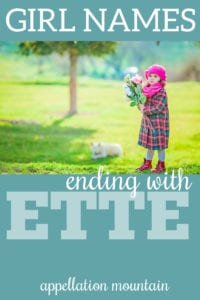 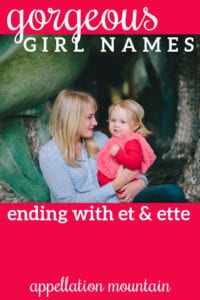 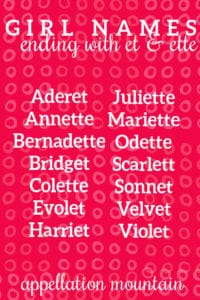