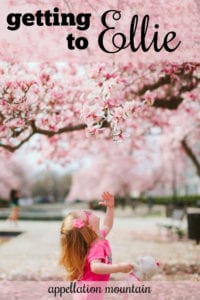 Ellie makes a great name for a daughter. Spunky and sweet, it’s surprisingly versatile, the kind of name so familiar that we’re never surprised to hear it.

And yet it does feel casual. Plenty of parents consider whether or not to choose a formal name for Ellie.

If you’re considering inking Ellie on your daughter’s birth certificate but would like something a little longer for formal occasions, read on.

Elizabeth, Elisabeth – Worn by queens and saints, it’s impossible to argue with the enduring appeal of this name. It is also possible to choose another nickname, from Liz to Betsy to a dozen more.

Eleanor, Elinor – Equally regal, but slightly less common, though Eleanor now ranks in the US Top 100.  Variant spelling Elinor brings to mind Jane Austen’s heroine in Sense and Sensibility. Eleonore is yet another variation.

Elaine – A cousin to Helen, kept alive in the tales of King Arthur, Elaine peaked in the US from the 1920s through the 1950s. That makes it a grandmotherly choice today, but with nickname options Ellie and Lainey, don’t count it out.

Elena – Instead of Elaine, most modern parents favor the globe-spanning Elena. You might spell it Elaina or Alaina, but it’s the straightforward Elena that ranks in the current US Top 100. It’s even more popular elsewhere in the world.

Elise – “Für Elise” might be Beethoven’s famous piece for piano, which makes this name feel traditional and musical, too. (For what it’s worth, the Elise for whom the piece was composed? She’s lost to history.) It’s tough to peg this name to a particular decade, making it timeless, just like Elizabeth, from which it is derived.

Eliza – Another Elizabeth name, Eliza crackles with energy. It boasts plenty of history, from Hamilton! to My Fair Lady, and notable bearers galore. Plus the emphasis on the ‘z’ sound makes this feel thoroughly modern.

Ella – Wildly popular, Ella requires no nickname. And yet, it’s easy to imagine an Ella sometimes answering to Ellie.

Ellen – Looking for a no-nonsense name for a daughter? Ellen fits the bill.

Eliana, Elianna, Elliana, Ellianna – I long assumed this was an elaboration of Ellie, along the lines of Liliana, choose your spelling. But it has roots in Hebrew, as well as an ancient Roman family name, by way of Greek. If it didn’t exist, we would’ve invented it.

Elodie – A thorougly French option, Elodie fits with so many three-syllable, ends-with-y or -ie girl names.

Elsa – So close to Ella, but with an extra sound, Elsa ought to be on the rise. Except it’s so tied to the ice queen of Frozen fame that parents are steering clear – at least for now.

Elspeth – A Scottish twist on Elizabeth.

Elvira – Long associated with a popular song by the Oak Ridge Boys, as well as a campy actress known for hosting horror movies on television, Elvira felt unwearable for some time. But how ’bout Mozart’s piano concerto, known as the “Theme from Elvira Madigan,” a 1967 movie? Based on the true story of a circus performer and military officer who fall in love, run off together, and end tragically, it’s a haunting tale. As the other pop culture references fade, perhaps the piano piece makes the name worth considering.

Ellery – Long an under-used masculine choice, Ellery could join Avery and Emery as a girls’ name.

Elliot, Elliott – Both spellings are popular for boys, and sometimes heard for girls, too. Author George Eliot – the pen name of Mary Ann Evans, adds to this perception, as do names like the French Eliette.

Ellis – Awfully close to Alice, but perfectly plausible as a given name.

Ellison – With Allison in mom name territory, maybe Ellison is the logical heir. It fits with Madison, Emerson, and so many other surname-style girl names we’ve embraced in recent decades. And it easily reduces to Ellie.

Annabel, Annabelle, Arabella – Any of these could possibly work, though I tend to hear them called Bella or Belle instead.

Ariel, Arielle, Ariella – A name with history aplenty, Disney launched Ariel for girls with The Little Mermaid. But today, the names succeed on their own merits, including that stylish -elle sound.

Brielle – Originally short for Gabrielle, Brielle also inspired spin-offs like Abrielle. Any of them could shorten even more.

Emmanuelle – Rarely heard in the US, Emmanuelle is long enough to encourage shortening, and Ellie is nearly as likely as Emmie.

Estelle, Estella – Another long-used name ending with the right sounds.

Isabella, Isabelle, Isobel– The most popular of the ends with -ella names, though I rarely hear them shortened to Ellie.

Gabriella, Gabriela, Gabrielle – Long-time favorites, all of the Gabrielle names have faded slightly in recent years, but they still lend themselves to Ellie.

Giselle – A romantic French name with a tragic ballet to match.

Mariel, Marielle, Mariella – A rarity in any form, Mariel and company seem like overlooked gems.

Amelia, Emilia – So many Amelias answer to short forms. Mia, maybe, or Amy or Millie. But Ellie? It feels like a stretch, but maybe it works.

Endellion – A Cornish name with ties to a saint, and the correct sound found in the middle.

Elsinore – A place name from Shakespeare, Elsinore makes for a literary twist on Eleanor.

Everild – One of my favorite neglected gems, though I’d probably call Everild Evie.

Elvia – A true rarity, but perhaps worth consideration.

Marcelline – Elle is buried in the middle of many a name – Penelope, Cornelia.  In most cases, Ellie feels non-intuitive, but somehow I can hear Ellie coming from Marcelline.

Would you ever use the name Ellie?  Would you consider a longer name?  Which one?  Are there any I’ve left off?  And do you know any little Ellies? 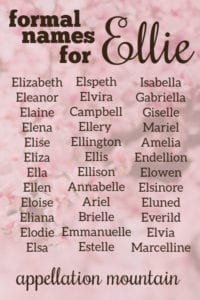