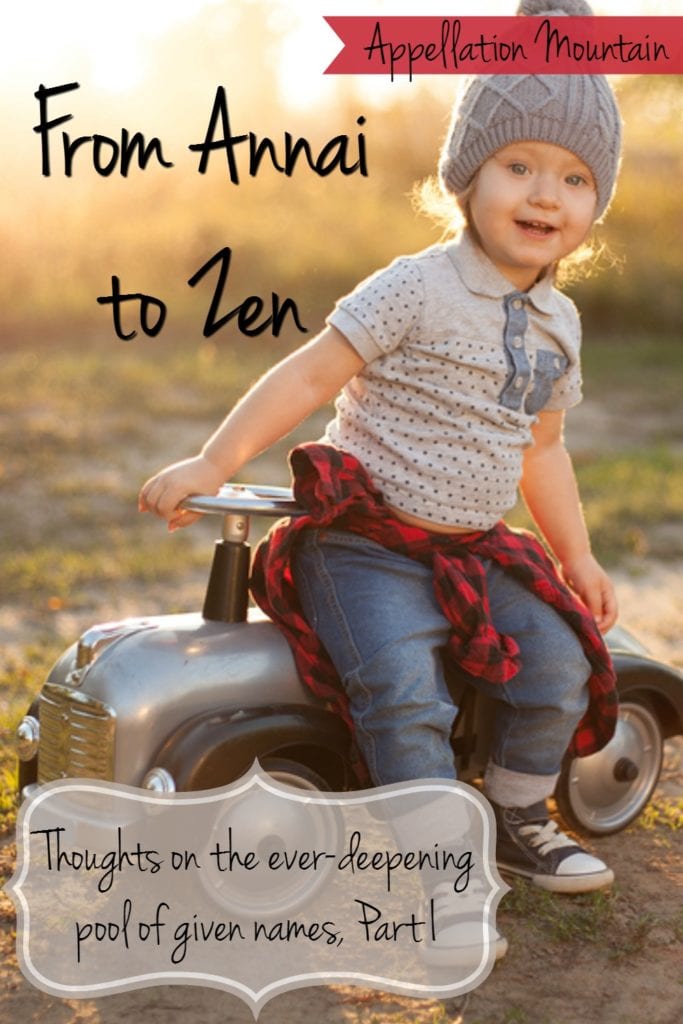 I’m fascinated by new baby names – names that have virtually no history of use as English-language given names until now. And I’m equally intrigued by how we perceive them. Anneliese is a fast-rising import that I’ve heard called vintage. (Maybe in Berlin, but in the US? Not so much.) Caliber is a modern noun name, but does it refer to ammunition or high quality?

Celebrities add to the name pool, but so do bloggers and ordinary folk. In the past few months, Blue, Glow, and Boheme have all become possibilities for daughters, at least for the most daring among us. Boys can be named Bear or Fox – which seems wacky and modern, but is actually a centuries-old custom.

While this is often a signal to start lamenting the demise of so-called normal names, the truth is that a trend towards more diversity in given names is not new. The percentage of children receiving a Top 1000 name in the US is lower than in years past. But that just doesn’t simply signal more parents at the fringes. The number of children receiving Top Ten and Top 100 names has steadily declined through the ages, too.

But why is that, exactly? I’ve gathered up a list of my thoughts, and I’ll be sharing it over the next few weeks. First up: three things that we have less of circa 2012.

10. The pressure to Anglicize a name is gone.

In many families, our grandparents or great-grandparents routinely adopted typically American names to help them fit in. Diego and Giacomo answered to Joe or Jack. In many cases, they gave their children names designed to fit in, too. Even if they followed old world naming customs, handing down a parent’s name, they used the accepted English version. (Though there are interesting cases, like Ladusky, where landing on the accepted English version wasn’t so straightforward.)

Today, many parents don’t hesitate to use Diego or Giacomo. You’ll find little girls named Aleksandra or Natasha just because their great-great-grandfather was Russian. Even more tentative connections are possible, with parents who honeymooned in Paris focusing on French names, or those with an interest in anime considering choices like Akira.

The explanations can feel artificial, even whimsical. And yet, for families trying to reclaim heritage where it has been lost, this can be a very serious exercise. Some African American parents have embraced names like Ayanna or Imani, though they have little hope of discovering the actual names on their family tree.

If you’re inclined towards tradition, the possibilities are endless.

9. The pressure to follow naming conventions or family traditions continues to decline.

While you’re welcome to embrace your heritage, there’s no need to do so – and that’s relatively new.

In many places and times, names were determined by custom. Children were named after parents, grandparents, godparents, or the saint commemorated on the day of her birth. It could lead to the handing down of rarities, like a mother’s maiden name.

These practices tended to amplify the most common names – especially for boys, where the combined pressure to Anglicize and carrying on a male relative’s name led to lots of boys called Bill instead of Willem and Vilhelm and Guillermo. The force of naming conventions could be so great that cousins shared the same name, like that great scene in My Big Fat Greek Wedding where everyone is named Nick.

When choice was limited, a certain amount of repetition was inevitable. As that pressure declines, more names inevitably come into use.

8. The need to put a formal name on the birth certificate continues to decline.

We know that certain names have been dominant for centuries, like Elizabeth and John. But we also know that those names have given rise to an astonishing number of possible diminutives and elaborations. Elizabeth might have answered to Betty or Liz in real life; John could be Jack.

Tradition used to hold that the formal name went on the birth – or baptismal – certificate, and then you were welcome to answer to whatever appealed in real life.

Less formal names have been gaining for generations. Betty made it into the Top Ten in the 1920s. Jack has long been bestowed independently, and now he’s catching up to John in the US. In the UK, he’s long since surpassed his buttoned-down brother.

What’s behind the change? We’re less formal in general. I wear the same clothes to work, to church, to the grocery store. I call my boss’ boss by his first name, and I actively dislike being called Mrs. Sandel. In an atmosphere of casual and instant equality, why fuss with Alfred if you only intend to call your kid Alfie?

Actually, I think there are pretty good reasons to consider a formal name, but they’re far less necessary than they might have been a few generations earlier. More names become viable options, as our daughters can be Charlotte or Caroline – or Carlie, Charlie, Callie, or Carrie.

Read installment two and three in the series.