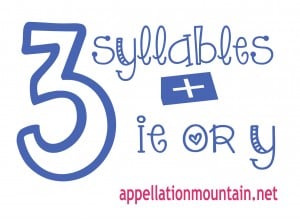 If there’s one rhythm I adore in a girl’s name, it has to be three syllables, ends-in-y.  I’m not alone, either.  Current favorites include Emily, Avery, Natalie, Destiny, Mackenzie, Kimberly, Valerie, Stephanie, and Kennedy.  If you’re a fan of the style, but prefer something more obscure, there’s no shortage of possibilities.

At least one name fitting this pattern has been in vogue in every decade.  Many of today’s parents grew up with them: three syllable names for girls like Brittany and Tiffany fared well in the 1980s and early 90s.

They occur in plenty of other languages, especially French.  If you’re not into retro revivals or imports, there are also plenty of more novel choices, from surname names to word names to fresh inventions.

Did you have your heart set on Natalie until your college roommate used it?  Was Stephanie always your #1 girls’ name, but now you worry it is too common?  This list might appeal to you.

Adelie – Better known as a type of penguin, thanks to explorer Jules Dumont d’Urville.  d’Urville named a number of things in Antarctica after himself and his family, including the seabird.  Adelie is a form of Adelaide.

Amelie – The French form of the enduring Amelia, Amelie caught our attention in 2001, thanks to Audrey Tatou’s star turn in the celebrated French film of the same name.  She’s been quietly on the rise ever since.

Athalie – If Addison can follow Madison, how about Athalie following Natalie?  She’s a French form of Athaliah or Atalia.  In the Old Testament, the name is given to the daughter of Jezebel.  In real life, it is incredibly rare, but not without possibility.

Coralie – A French form of Coral, making her a ocean-inspired nature name, too.

Elodie – A French spin on a clunky ninth century saint’s name, Elodie picks up where  the musical Melody leaves off.

Eugenie – Will Eugene ever make a comeback?  Hard to say, but this French feminine form worn by a British princess has some style.

Ottilie – A français feminine form of the bulky German Otto, she’s an unexpected way to arrive at the nickname Tillie.  She’s also a fast favorite of baby name fans.

Sidonie – Yes, she’ll be forever mistaken for Sidney.  But if you can overlook that complication, her sound is lovely.

It’s not just French – plenty of languages boast attractive three syllable names for girls ending in -y, -ie, and -i.

Idony – A medieval English spin on a name from Old Norse myth.  Idun was the goddess of spring.

Kateri – The Mohawk version of Catherine, Kateri Tekawitha will soon become the first Native American saint in the Catholic church.

Noemi – The Italian form of the Biblical Naomi, Noemi borrows vowel sounds from poetry.  Add an -ie instead, and she’s the French Noemie.

Do you love Mackenzie, but worry she’s overexposed?  Did you considerKennedy until your neighbor used it?  Here are similar-but-different possibilities.

Bellamy – A French surname with a great meaning – fine friend, plus the feminine short form Bella.

Delancey – Delancey Street is a major thoroughfare on Manhattan’s Lower East Side, though not necessarily a glamorous one.

Delaney – Probably the most popular pick on this list, but still a great choice for a girl, thanks to her similarity to the upbeat Laney.

Ellery – A surname related to fourth century Saint Hilarius, Ellery fits with Ellis, Ellison, and plenty of other names that lead to Ellie.

Flannery – If Harper is hot for girls, how ’bout this literary choice, borrowed from Mary Flannery O’Connor, better known by her middle.

Romilly – An obscure surname imported to England by the Normans, Romilly sounds like vintage girls’ favorites Rose and Millie – a winning combination.

There’s Hope and Grace and Mercy, too, as well as more novel choices like Destiny.  If you’re after a name chock full of meaning, there are plenty of options.

Charity – An admirable quality with an attractive sound.

Constancy – Yet another modern entry in this category, she’s a little more interesting than the conventional Constance.

Harmony – A musical term and a synonym for accord.

Liberty – A quirky, bouncy word name that has resonated for parents at different points in history.

Verity, Verily – More subtle than Truly.  The poetic Verily retains the meaning, but is even more rare.

Victory – The conventional given names are Victor and Victoria, but Victory has some possibility, too.

Retro & Ready for a Comeback

Attracted to all things vintage?  This category is a treasure trove!

Annalee, Annalie, Annelie – With multiple spellings, it is hard to get a handle on just how popular the smoosh of Anna and Lee might be, but along with Anneliese, she seems to be on the rise.

Cecily – She’s a frilly choice, the common form of Cecilia in medieval English.

Dorothy – She went over the rainbow, lending her name some adventurous spirit.

Margery, Marjorie – A medieval spin on Margaret, the Marjorie spelling has been more popular in recent decades.

Naomi – The faithful, Biblical Naomi deserves a place on this list.  But be warned: Naomi seems unusual, but actually ranks in the US Top 100 these days.

Rosalie – A lovely elaboration of Rose.

Rosemary – A combination of two enduring appellations, with a tie to the herb, too.

Many of the most interesting category are the newly invented combinations, or word names not previously in use.

Albany – The city in upstate New York was named for the Duke of Albany.

Amberly – An elaboration of Amber influenced by Kimberly, with more history than you might think.

Amerie – It could be a spin on the masculine Amory or Emery, but it seems to have caught parents’ attention thanks to the singer, also known as Ameriie.

Betony – A flowering herb with a long history of medicinal use, Betony sounds something like Bethany.  It also brings to mind the surname of actor Paul Bettany, another possible spelling.

Everly – The musical Everly Brothers come to mind, as does the word Ever, sometimes heard as a modern word name.

Holiday – As worn by Audrey Hepburn in Breakfast at Tiffany’s.  Enough said.

Poetry – A noun name in the company of Poet, Poem, Sonnet, Lyric, Story, and Fable.

Reverie – Chosen by blogger Girls Gone Child for one of her twins, this one has slowly been catching on.

Rhapsody – Another musical term that might works as a child’s name.

What’s your favorite three-syllable, ends in -y or ends in -ie name for a girl?  Are there other three syllable names for girls that belong on this list?