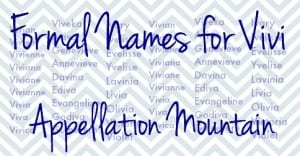 We love the letter v. Just ask the parents of all those girls called Ava and Olivia.

And then there’s Viv. It’s heard in many a current favorite, and even more up-and-coming baby names. Could Vivi be the new nickname of the moment, eclipsing Lily and Addie and Ellie, too?

You could put Vivi on the birth certificate. 17 parents did in 2014. But there’s no shortage of formal names for Vivi, from the tailored Vivian to the unexpected Lavinia.

Read on for a long list of possible formal names if you love Vivi, but aren’t sure if it stands on its own. Vivian – Saint Vivianus was a French bishop back in the 400s. Before you call name theft, though, it’s worth noting that Vivian is also derived from Irish myth, where Bébinn is goddess name. Tennyson gave the name Vivien to the Lady of the Lake in his tales of Camelot, but it’s not clear where he found the name. In any case, there’s ample reason to consider Vivian truly gender neutral. At #98 in 2014 and rising fast, it’s also the most popular of the Viv- names for girls. Vivien, as in actress Vivien Leigh, is another possibility.

Vivienne – Let’s call this spelling the challenger. Vivienne ranked #249 in 2014, and was rising rapidly. It’s the high profile choice of several celeb parents, and it has a lot of appealing French style. I think it could eclipse Vivian. It’s also often pronounced differently, with emphasis on the final syllable.

Viviana – The romantic Viviana is one of the few Viv- names that wasn’t picking up steam in 2014. It felt a few places to #453. It’s the name of a fourth-century martyr saint – though she’s usually recorded as Bibiana – and fits right in with Sophia and Isabella.

Viviane – It’s French, along the lines of Liliane, but it’s not fashionable in France today. In fact, Viviane peaked in the 1950s, making this more of a name for grand-mère than une petite enfant. But Viviane could wear well in the US, where it has never cracked the Top 1,000 – but it was given to 30 girls in 2014, a new high. Vivianne is another possibility.

Vivia – Viviane brings to mind Liliane, which makes me think of Lilia and … Vivia? Just eighteen girls were given the name in 2014, but again, that’s a peak. If you’re after a truly different and straightforward way to get to Vivi, it’s an option.

Viva – Viva immediately makes me think of the two things: the Latin word vivus, alive. And paper towels. Despite the associations with paper products, I think Viva has a lively meaning, an on-trend sound, and is quite wearable. History agrees. From the nineteenth century through the 1920s, Viva ranked in the US Top 1000. As of 2014, it was given to just 20 girls, but it’s on an upward trend.

Vivica, Viveca, Viveka – I’m never sure of the best spelling for this rarity. Vivica Fox makes me think of the first spelling as the most natural, but Viveka is the preferred form in Swedish. It’s the only Vivi- name that isn’t related to the Latin vivus. Instead, it’s the Swedish form of a German name. Vivek is also a masculine name with Sanskrit roots, so Viveka is quite the world traveler.

Formal Names for Vivi: Vivi in the Middle 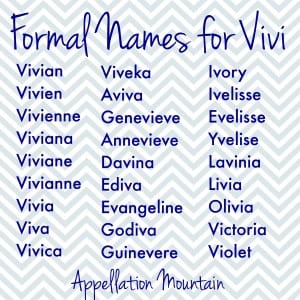 Aviva – From a Hebrew name meaning spring, Aviva feels like an elaboration of Ava, and one that leads naturally to Vivi. Aviva has never cracked the US Top 1000, but feels like a familiar, wearable name.

Genevieve – As French as Vivienne, and more popular, too. Genevieve is the patron saint of Paris, and a name that feels effortlessly French while being very familiar in English. Strictly speaking, the -vieve rhymes with eve, not viv. But Genevieve called Vivi doesn’t seem like a total stretch. At #220 in 2014, Genevieve is popular, but not stratospherically so. Another possibility is the truly rare Annevieve, which I’ve never heard in use, but think could be absolutely gorgeous.

Davina – Despite the long popularity of David, feminine forms have never really caught on. But Davina is a lovely option, less common than many a ‘v’ name for girls, and perfectly wearable. The strong ‘vi’ sound could lend itself to Vivi.

Ediva – Eadgifu of Wessex lived in the tenth century, the daughter of the King of Wessex and wife of King Charles III of France. I’ve seen her name written Edgiva, and I found Ediva on a long list of names that might have been used over the years. (Though I have my doubts.) Ediva intrigues me, though I wonder if the ‘diva’ sound is too prominent for this one to be wearable.

Evangeline – Romantic and literary, Evangeline is long enough that a nickname is almost required. The obvious choice is Evie, but Vivi might work, too.

Godiva – It’s an extravagant name, one that brings to mind ladies on horseback and chocolates in gold foil. Vivi might make this over-the-top name a little more wearable – but only a little.

Guinevere – Names from Arthurian legend are a fascinating bunch, and Guinevere is the queen – literally. The Cornish form of Guinevere is the former #1 favorite, Jennifer. But in 2016, Guinevere could be the more appealing possibility – much rarer than Genevieve, but still familiar. I’d probably shorten Guinevere to Gwen, but Vivi might work, too.

Ivory – Sometimes a name comes out of nowhere. Ivory was given to boys and girls in the nineteenth and early twentieth centuries, but has been rare in the last few decades. Ivory returned to the US Top 1000 in 2013, and currently stands at #753. The name owes something to Scarlett and Olive, and probably more to Ava and Ivy. It feels like a nickname-proof possibility, or might shorten to Ivy – but Vivi isn’t out of the question.

Ivelisse, Evelisse – Known in Spanish-speaking countries, Ivelisse may have come from an Italian name, Yvelise. (I found one notable Yvelise here, in New Orleans.) It’s rare no matter how you spell it, but I do think it’s a lovely way to get to Vivi.

Lavinia – Vivi makes this elegant antique vibrant and fresh, I think. Lavinia’s roots go all the way back to Ancient Rome, and the name was used in nineteenth century America. Lately, it hasn’t been heard much, but it is a Downton Abbey name – Matthew’s first fiancé was the wealthy Lavinia Swire.

Livia – Another ancient name, it could relate to the color blue. Or it might mean envious. Either way, Livia was the wife of the emperor Augustus, and feels like a short form of the wildly popular Olivia. Livia has gained in recent years, charting at #665 in 2014.

Olivia – Let’s say that you’re one of the nearly 20,000 girls named Olivia in 2014 alone. You could shorten your name to Livi/Livy/Livvy. Or you could a step farther and try Vivi. It’s the most distinctive possibility.

Victoria – Unconventional nicknames for the regal Victoria abound, from Vita to Plum. Why not Vivi?

Violet – Violet requires no nickname, but Vivi could be formed by repeating the first syllable. If Constance and Collins can become Coco, why couldn’t Violet be Vivi?

What’s your favorite formal name for Vivi? Have I left any off the list?