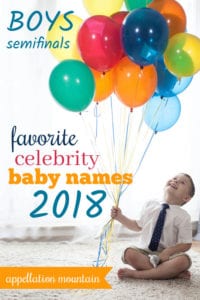 Welcome to the Boys’ SemiFinal Round of the Favorite Celebrity Baby Names 2018 contest!

Every year, I like to ponder the most intriguing celebrity baby names. And I’m gearing up to do that again soon. But it also prompted this thought: Which celebrity baby names are really most popular? Not dazzlingly different. The kind of names we love when our neighbor chooses them. The names we might consider ourselves if we were expecting a son right about now.

And so I’m crowd-sourcing our favorite celebrity baby name, one for the boys and one for the girls, by focusing on celebs who chose mainstream favorites for their kiddos.

The first round started last week; check out that post for more on all of the contenders.

Let’s take a look at the results, and see which boys’ names advance to the SemiFinals:

This means that Sebastian, Louis, Beckett, and Miles continue on to the SemiFinals.

Which name is your favorite? Vote now!

Could this match-up be any tougher? Two debonair choices for a son, modern in style but grounded in history.

Both names make handsome choices for a boy, but one is a rock solid traditional; the other, more of a modern staple.

Check back next week to see which names advance, and of course, to vote for your favorite of this year’s celebrity baby names!