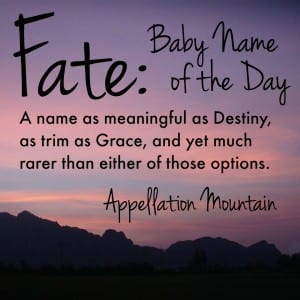 Over 2,000 girls were named Destiny in 2014 alone. This equally dramatic and meaningful possibility has been overlooked.

Thanks to Virginia for suggesting Fate as our Baby Name of the Day.

At first, Fate doesn’t feel like a name. Except that Kate, Nate, and Tate are all acceptable – even classic – names for children. So it’s hard to argue that Fate’s sound is unworkable.

Fate fits with a second trend, too – our preference for short, meaning-rich names for children. From classics like Grace and Faith to more modern picks like True, it’s a popular category.

Fate: That Which Must Be

The word comes from Latin, but here’s a twist: it comes from fatum, which translates to an utterance. Fate is a decree of destiny, a declaration of the gods.

As the word evolved, it came to mean a prediction or something inevitable. It’s been used in English since the 1300s, but the meaning has shifted subtly over time. At one point, it had a negative connotation – fate was usually used to describe bad luck. Doom, if you will. Think of our word fatal – originally it meant ordained by fate, but since the 1400s, it’s been associated with death.

Today, fate seems much more neutral, maybe even romantic. It was fate that you met your partner at the cafe/airport/picnic. Or fate that you would pursue a career in the arts, just like your father and grandmother.

Fate has become something we give in to with pleasure, not a terrible force beyond our control.

Greek and Roman myth have a trio of goddesses commonly known as the Fates. So does Norse mythology, where they’re called the Norns, and Slavic – they’re the Sudice. Shakespeare’s Three Witches in Macbeth serve the same role.

None of their names are particularly common today:

I couldn’t find names for the Slavic Sudice.

Shakespeare’s witches are unnamed, but they’re also called the Weird Sisters, from the Old English wyrd – which meant fate. That phrase inspired the Weird Sisters of Harry Potter fame, as well as a trio of characters from Disney’s 1990s-era series, Gargoyles: Luna, Phoebe, and Selene.

It almost makes Fate a mythological name in the key of Juno or Daphne.

Fate: Other than Destiny

The natural world gives us Fata Morgana – an elaborate mirage, typically seen right above the horizon. Fata Morgana is the Italian name for Morgan le Fay, the sorceress from Arthurian legends. The mirages were believed to be the work of witchcraft, designed to lure sailors to their death. (There’s a scientific explanation, of course.) Fay refers to fairies, but it also comes from the same root as the word fate.

Then there’s Magical Girl Lyrical Nanoha, a Japanese anime television series from 2004. A manga series, a movie, and more followed. Nanoha Takamachi is the main character, and Fate Testarossa is an opponent in the race to find the Jewel Seeds.

Overall, I think Fate works best as a bold middle name possibility for a son or a daughter.

What do you think? Does Fate work? For a boy, a girl, or only in the middle?