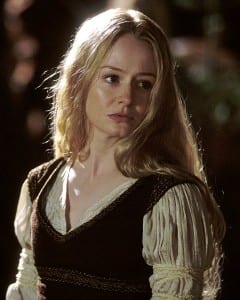 She’s a vowel-laden name invented by J.R.R. Tolkien.  How would she wear on a real girl?

Thanks to Lora for suggesting Eowyn as our Baby Name of the Day.

The Lord of the Rings is one of the best-selling, most widely read novels ever.  If, by some chance, you’ve never cracked the spine of Tolkien’s masterwork, the movies were box office smash hits and Oscar winners, too.

Which means that nearly everyone has some familiarity with the tales.

Eowyn isn’t quite a household name – she’s not Frodo, Gandalf, or even Aragorn.  I think it is possible that some of us would not immediately associate Eowyn with the movie.  Like Arwen, it is easy to believe she’s a traditional name you’ve just overlooked.

She is a compelling character, too.  The lovely Miranda Otto played the part in the movies.  Eowyn is beautiful and fierce – she wants to go into battle, but a) she’s a girl and b) her uncle – the man who raised her – is in decline, and needs a nursemaid.  So Eowyn is a wreck when we meet her, and for that reason, she’s not everyone’s favorite.

Then things pick up for Eowyn.  By the end of the stories, she’s ridden into battle and defeated the Witch-king of Angmar.  Prophecy says that the Witch-king cannot fall by the hand of man.  Eowyn whips off her helmet and declares, “But no living man am I!”  The Witch-king is ended, and Eowyn finds love and lives happily ever after.

Now about her name.

Tolkien was an academic, an Oxford professor.  He’s know for inventing whole languages, making his place and personal names more than just fanciful creations.  They’re rooted in the same languages that contribute to the English we speak today.

This potentially puts Lord of the Rings names in a slightly different category than other invented names.  Renesmee is just an awkward smoosh; Katniss is pleasing, but just a borrowing of a botanical name we’re not already using.

Eowyn could have existed as a given name, only she didn’t.

Tolkien spells her with an accent on the e – Éowyn.  It’s a Rohirric name, one of his invented languages, inspired by Old English.  The element eo did refer to a horse in Anglo-Saxon.  And wyn is a common element in masculine and feminine Anglo-Saxon names.  It means joy, delight – or maybe friend.  There’s Godwyna and Maerwynn and the like, but no Eowyn.

There’s also quite a lot of debate about pronouncing the character’s name.  We seem to have settled on AY oh win in the US, but eh oh win and ee oh win seem to be possible options, too.

Christian alt rock recording artist Éowyn was born Rebecca Éowyn.  She’s said in interviews that her name comes from the character, thanks to her dad‘s affection for the Lord of the Rings character.

The name peaked in 2004, the year after the final installment in the film trilogy was released, complete with Eowyn’s battle victory scene.

Where does that leave her today?  Her sounds are stylish – think of Eloise or Isla or Ava, all vowel-intensive choices.  If you can embrace – or overlook – her origins in literary fantasy, Eowyn could wear well in 2013.