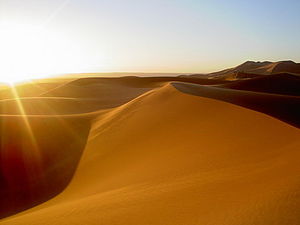 Thanks to Rachel for suggesting Dune as our Baby Name of the Day.

Respell it Doone, and I think of the literary Lorna.

Both of them lead back to topography.  In Old English, dun is a low hill.  There’s an almost identical word with Celtic roots.

They’re also called downs, and plenty of place names and surnames come from them.  There’s Down and Downer and Donne and Doune and yes, Dunn and Dune, too.  The real Scottish city of Dundee takes its first element from the word, and London owes its ending to dun.  The imaginary land of Brigadoon could have been inspired by the same.

Today, a dune isn’t just any old hill – it’s a hill of sand.  They can be massive, clustered together in fields.  Or they can stand in a relatively modest row, a break between the beach and the land farther in.  Wind and water form them, and they protect the land from the impact of windstorms and waves.  Some are nothing but sand, but the ones that you see along the coast are rich with grasses and vegetation – that’s part of what holds the dunes in place.

Frank Herbert’s sci-fi series Dune borrows the structures for Arrakis, “wasteland of the Empire, and the most valuable planet in the universe,” a desert planet populated with fierce sandworms, but rich in prized spices.

Herbert was inspired to pen his tales after visiting the Oregon Dunes, where sand dunes really do tower 500 feet tall.  They clearly captured his imagination.  But it’s more than that, though – Herbert dedicated his fiction to the ecologists who worked to protect the environment.  When the novel was published, in 1965, environmental awareness was in its infancy.  So while his work might have been science fiction, it is easy to argue that Herbert’s bestseller influenced our awareness of a host of real-world issues.

One negative association comes via comic strip Doonesbury, a staple of the funny pages since the 1960s.  Garry Trudeau has been writing about Michael Doonesbury for more than four decades.  He’s said that the character’s surname was inspired, in part, by doone – a slang term for someone clueless.  And yet, this seems like a little-known piece of trivia, unlikely to bother parents today.

Olympic swimmer Amanda Beard welcomed a daughter named Doone Isla in 2013, but actual children named Dune are incredibly rare.  There have never been more than five Dunes born in any year since 1880, when the stats were first collected.

And yet, Dune seems the more wearable of the two spellings.  There’s the nature name tie, putting Dune in the company of some very stylish baby names.  Plus, with names like Lucy and Jude at the height of fashion, Dune’s vowel sound fits right in.

If you’re after a daring first name or a nature-themed middle, Dune is one to consider.