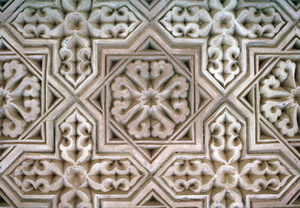 Take Daisy, add Sasha and you arrive at this novel name.

Thanks to Felecia for suggesting Daisha as our Baby Name of the Day.

Back in 1970, seven girls received the name Daisha.

If you search through music, movies, current events, there’s no mention of a notable Daisha.  And Daisha doesn’t seem to have existed as a name – at least not one with an established meaning and history – prior to that year.

But Aisha is another story.  Aisha is a given name with deep Arabic roots.  She was one of Mohammed’s wives, and her name means alive.  After Mohammed’s death, she rode a camel to lead troops into battle.  Aisha is a widely respected figure, and it her name has a long history of use.

There’s also Aisha Bibi, a scholar’s daughter who met a tragic death while trying to marry her true love.  The Aisha Bibi is a mausoleum built in her memory, sometime in the 1100s.  (Bibi means lady; it’s an honorific, not a name.)  It stands in modern day Kazakhstan.  The photo above shows detail from the delicate terracotta tiles decorating the structure.

Back to Daisha.  In 1968, King Hussein of Jordan, and his wife, Queen Noor, welcomed a daughter named Aisha.  The name skyrocketed in use, from just a handful of girls to over 1,500 in 1977.  Stevie Wonder named his daughter Aisha in 1975.

Daisha and Taisha were lifted by the same tide.

It’s more than just a popular name.  Parents who came of age during the civil rights movement may have been seeking heritage choices. But what’s a heritage choice when your family history is difficult to know?  Islamic names came into vogue.  Creative naming, too, has been a hallmark of African-American culture in recent decades.  Daisha is at the crossroads of the two trends.

There’s also the rise of Deja – the French word for already.  She was climbing in the 1970s, possibly boosted by Dionne Warwick’s hit single “Déjà Vu” in 1979.

There’s something about the name that feels pan-international.  I wondered if she might be Russian.  Dasha is a diminutive for Daria in Slavic languages, especially Russian.

All of this makes Daisha an intriguing possibility, but how is she pronounced?  There are three possibilities:

Daisha is fading fast, given to just 44 girls in 2012.  That’s the hallmark of a name that rises quickly without a lot of history to support it – the Miley trajectory.

And yet, Daisha sounds appealing to my ear.  She’s more novel than Sasha or Daria, but not as obvious as the endless -aylee, -ayla names from recent years.

Overall, Daisha might make a charmingly unexpected choice for a daughter.