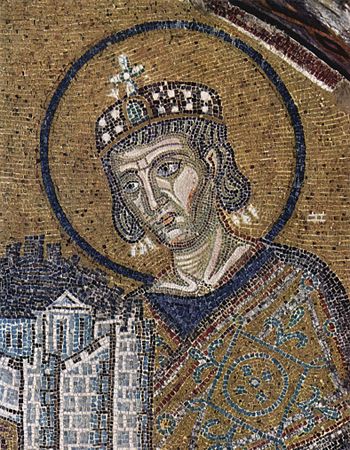 Take a towering ancient figure, mix in a dose of comic books and Keanu Reeves, and what do you get?

Thanks to Virginia for suggesting Constantine as our Baby Name of the Day.

No matter how sketchy your grasp of history, some names resonate.  Julius.  Alexander.  And yes, Constantine.

Constantine the Great was Roman Emperor from 306 to 337.  Like his father before him, he rose through the military ranks to become a political player.

During his long reign, the emperor reformed the government, restructured the military, addressed financial matters, and much more.

But Constantine is best known for two major decisions: he officially allowed Christianity and eventually converted to the faith on his deathbed, and he moved the capital of the empire east, leaving Rome for Byzantium – which he renamed Constantinople.

He’s considered a saint.  And, of course, his new capital would become a major international city for decades.

Also, it would inspire this quirky cool song, originally recorded by the Four Lads, but made famous to this generation thanks to They Might Be Giants:

Constantine: Not Just for Byzantine Emperors

While Constantine’s descendants were particularly fond of the name, rulers of Armenia, Greece, Bulgaria, and even Scotland have answered to Constantine, too.

And then there’s the twentieth century comic book character.

DC Comics’ John Constantine isn’t exactly a hero.  He was introduced in 1984, and the became star of the Hellblazer series from 1988 through 2013, and Constantine since then.

John is snarky, cynical, and doomed.  But despite his fate, he repeatedly chooses the path of the do-gooder.

In 2005, Constantine became a big screen movie with Keanu Reeves as the con-man/detective/magician/exorcist who sends demons back to Hell.

Just last month, NBC rebooted the story for television with Welsh actor Matt Ryan as the star.  Too soon to say if it will be a hit, but the new series keeps the spooky-cool side of Constantine top of mind.

Constantine: Forever Under the Radar?

Despite all of this history, and plenty of international use, the name remains rare in the US.  That’s one of the reasons Constantine could appeal to parents in 2015.  Consider:

There are lots of reasons to imagine that Constantine’s time off the radar could be drawing to a close.

There have always been some boys by the name, enough to push Constantine into the US Top 1000 in the early twentieth century, and again in the 1960s.  He’s been unranked ever since, but between 90 and 110 boys have received the name every year for the last few years – double the number in the 1990s and early 2000s.

Could the supernatural anti-hero be slowly reviving this great ancient name?  I rather hope so!