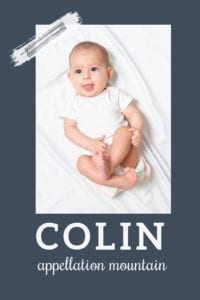 The baby name Colin transformed from overlooked antique to a modern staple, versatile and gentlemanly.

There are two main origins for this name.

Cailean comes from Scotland; Coilean, from Ireland. They both come from the same root – young dog or pup. But that would’ve meant something closer to rookie, a name for a trainee soldier.

But it also developed as a form of Nicholas. Shorten Nicholas to Col, add the familiar -in of Robin and Jankin and many other medieval diminutives, and Nicholas becomes Colin.

Nicholas names are plentiful, of course. Originally Greek, it comes from nike – victory – and laos – people. Saint Nicholas needs no introduction, and the name is well known in many languages.

Despite the clear connection, Nicholas and Colin have been viewed as separate names for years.

We often talk of names from Edmund Spencer’s last sixteenth century masterwork The Faerie Queene. He also penned The Shepheardes Calendar in 1579 and Colin Clouts Come Home Againe in 1590.

Spencer borrowed the character Colin from John Skelton, a poet writing a century earlier. Skelton’s Colyn Cloute gave the point-of-view of a regular Englishman living in the country. It’s an attack on the excesses of the church – particularly Cardinal Wolsey.

In the era, it must have read a little like “the average Joe.” British Baby Names theorizes that it explains a decline in the baby name Colin’s use.

We know that the baby name Colin was seldom heard in the US during the nineteenth century, given to just a handful of boys.

It started to rise in the early twentieth, and it has appeared in the US Top 1000 every year since 1932.

But it wasn’t until the 1970s that Colin really started to climb.

That’s around the same time Nicholas was racing up the popularity charts, so perhaps it’s as simple as that.

Frances Hodgson Burnett used it for the young boy in her 1911’s children novel The Secret Garden.

British actor Colin Clive earned a little bit of silver screen immortality in 1931, playing the doctor in Frankenstein. (Yup, he’s the one who cries out “It’s alive!”)

During the 1990s, English actor Colin Firth graduates from rising British star to international celebrity. He famoulsy played Mr. Darcy in Pride and Prejudice in 1995, and then starred opposite Renee Zellweger and Hugh Grant in Bridget Jones’s Diary – another take on Jane Austen’s classic tale. In 2010, he won an Oscar for playing King George VI in The King’s Speech.

There’s no question that Firth’s rise fueled our love of the baby name Colin.

But he’s not the only one.

Actor Colin Farrell might be Irish, but one of his first big roles was as Jesse James in 2001’s American Outlaws.

Beyond Hollywood, there’s no shortage of familiar bearers of the name. General Colin Powell served as Chairman of the Joint Chiefs of Staff. Following his retirement, Powell became the first African-American Secretary of State in the early 1990s. Athletes, musicians, and more have kept the name in the public eye.

Of course, one more fictional figure might come to mind. Netflix’s blockbuster series, Bridgerton, introduced the world to eight attractive and well-born siblings: Anthony, Benedict, Colin, Daphne, Eloise, Francesca, Gregory, and Hyacinth. While the series’ first season was all about sister Daphne, the show has been renewed – and Colin’s story is set for a future season.

The show cements the baby name Colin’s status as a new traditional. It’s handsome, polished, and maybe vaguely – but not exclusively – British.

But that could be part of the name’s appeal. It’s rock steady, a name that feels current without seeming at all trendy. It’s easy to hear Colin on a child or an adult.

What do you think of the baby name Colin? 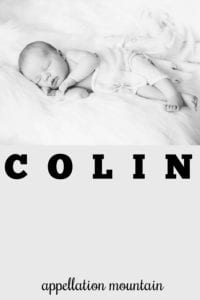