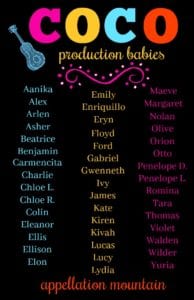 Coco production babies reflect the movie’s Mexican setting, but most of the list is plain-old eclectic and international Pixar. In other words: downright delightful!

45 names feature on the list – about average for a Disney-Pixar production babies tally. But there’s rarely anything average about Pixar production babies lists. The parents work in a powerfully creative environment. Even if they’re not storytellers themselves, they’re surrounded by some of the most imaginative minds in twenty-first century pop culture.

Just two names repeat this time, and if there were twins, the credits don’t list them.

Just like every list, this one comes complete with names that make me ooh and ah, names that seem like the next big thing, or names that simply confirm that trends we’ve spotted? They’re happening.

Every list includes a few mainstream favorites, and this one is no exception.

Nolan, Colin, Gabriel, and Asher all fit this category.

Beatrice, Emily, Kate, and Lucy are among the mainstream favorites for girls. Violet and Lydia are 21st-century staples, as are the two names that repeat on this list: Chloe and Penelope.

On the boys’ side, Ford, Orion and Wilder are all present, too.

Some of the names reflect the movie’s deep roots in Latino culture. The list includes Carmencita, as well as Enriquillo. They’re diminutive forms of Carmen and Enrique, traditional Spanish names.

If some of the names are straight outta the Plaza de la Cruz, others seem to be from farther afield. There’s Aanika and Kiren, which claim roots in multiple cultures, as well as the Japanese Yuria and the Hebrew Kivah.

Several of the names are nearly impossible to know if they belong to sons or daughters. Charlie, Ellis, and Ellison are the clearest unisex names, but others – like Alex – might be as well.

No Pixar production babies list would be complete without some real rarities. In this case, Arlen, Elon, Eryn, Gwenneth, Romina, Tara, and Walden all feel unexpected.

Proof that it’s a good time to name a son? The boldest vintage revival names on this list belong to boys: Floyd and Otto.

Classic Alex, Benjamin, James, Thomas, and Lucas all make the list for the boys.

For the girls, Eleanor and Margaret read the most traditional.

What are your favorite Coco production babies names? Any surprises here?