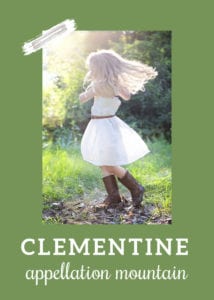 Thanks to Elisabeth and Zoe for suggesting today’s Baby Name of the Day.

In the early days of Christianity, several early church leaders took the name Clement, including Pope St. Clement I. It may be derived from a family name – St. Clement of Alexandria, for example, was born Titus Flavius Clemens.

Clement comes from the Latin for mild or gentle.

Early feminine forms ranged from Clementia to Clemencia to Clemence. All of the Clem- names fell out of of favor during the Reformation, but Clement made a comeback in the nineteenth century. The baby name Clementine emerged as the preferred English feminine form around the same time.

The nineteenth century gives us two princesses by the name.

First was Princess Clementine of Orleans, born to Louis-Phillipe, King of the French, in 1817.

Then there’s Princess Clementine of Saxe-Coburg-Gotha, born in 1872. Clementine married Prince Victor Napoleon in 1910. Had history turned out differently, she might have become Empress of France. The romance between the princess and the pretender to the throne was widely reported.

Aristocratic Clementines follow, but the name hasn’t been used much in royal circles in more recent years.

In the 1880s, in the American West, Percy Montrose penned the lyrics to Oh My Darling, Clementine, a mournful ballad about a lovely girl who meets a sorry fate. Odds are you know the refrain; it’s been a staple ever since.

It’s not the last time Clementine would feature in a song title. Bobby Darin recorded “Clementine” in 1960. It’s awfully mean-spirited by today’s standards. But then there’s Halsey’s quirky and fierce “Clementine” from 2019 … but we’ll come back to that song.

What we know is this: in 1880, the first year for which Social Security data are available, the baby name Clementine ranked in the Top 400 most popular names for girls born in the US – not Mary, but more popular than Ava or Abigail by 1880 standards.

Plenty of influences led to Montrose’s song. Maybe one of those includes the reason for the name, or maybe it was simply a reasonable choice for the era.

All of this – the popes, the princesses, the “Oh my Darling” lyrics – predate a familiar use of Clementine.

That would be the citrus fruit.

After all, we’re still talking about Gwyneth Paltrow’s decision to name her daughter Apple.

In 1902, Brother Clement Rodier discovered a hybrid fruit growing the gardens of his orphanage in Algeria, then a French colony. The new fruit was part sweet orange, part mandarin.

Rodier dubbed the new fruit a clementine, and a few years later they made their way to the US.

While the name’s status as a snack might detract for some, it’s worth noting that we routinely name our children Olive and Sage, too.

Born to an aristocratic family, Clementine Ogilvy Hozier married Winston in 1908. She was known for her leadership in the Red Cross and YWCA during the wars, and as a steadfast and loyal partner to her husband.

She’s also the best-known Clementine of the twentieth century.

From the 1960s into the early 2000s, the name hovered on the edge of extinction.

The sci fi romance was lauded by critics, and earned Winslet a Best Actress Oscar nomination. It’s often mentioned on best-of lists, and cited by the others as influential. Halsey’s song “Clementine” is a nod to Kate Winslet’s character.

Celebrities embraced the baby name Clementine in the following years. Claudia Schiffer was among the first; Ethan Hawke also welcomed a daughter by the name in the years after the movie’s release.

And why not? Clementine remains ripe for revival – sweet and slightly old-fashioned, worn by princesses and historical figures, with a great meaning, too. The baby name Clementine boasts a ready-made lullaby and color palette. It’s a name with depth, character, and charm.

Would you consider Clementine for a daughter?