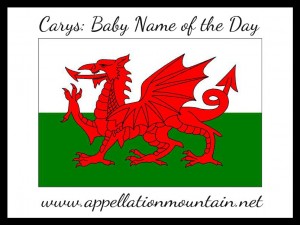 Editor’s note: This post was originally published on November 5, 2008.  It was substantially revised and re-posted on February 25, 2013.

She rhymes with Paris, but this tailored name is Welsh, not français.

Thanks to Corinne for suggesting our Baby Name of the Day: Carys.

You might hear Carys described as a traditional Welsh girls’ name.  I suppose that’s not untrue.  She’s been in use since the twentieth century, so you could meet a grandmotherly Carys.  But it would be better to think of her as a relatively modern innovation, a cousin for Brooke.

Most of the names chosen by Welsh parents would blend in on an American playground.  But Carys is among a handful of similar names currently in the nation’s Top 100: Seren, Cerys, Bethan, Cadi, Lowri.

Carys comes from caru – love.  This ties to her to some ancient names that share similar elements, like Caradoc or Caradog.  Worn by a a first century British chieftain, an eighth century king and a Knight of the Round Table in Arthurian legend, Caradoc is seldom heard on children today.

Still, Caradoc could put Carys in the company of names like Samantha and Maxine – the masculine forms date back centuries, while the feminine forms are relatively young.

Carys also gets mixed up with:

Carys has yet to crack the US Top 1000, but she’s gained in use over the last decade.  That’s largely thanks to Catherine Zeta-Jones and Michael Douglas.  The pair chose the name for their daughter, born in 2003.

Besides, Car- is a traditional element in girls’ names:

It’s easy to imagine parents considering Carys as an update to Carol or an alternative to Cara.  Spelling variant Karis also ranks in the US Top 1000, but whether she’s an invented name inspired by all of the Car/Kar names, or a spin on Carys, it is impossible to say.  Karis is also the name of Mick Jagger’s firstborn daughter.

Overall Carys makes for a feminine, but decidedly frills-free pick – a winning combination in 2013.  Carys is a compromise between a thoroughly modern pick like Sloane and a restrained vintage choice like Alice.  And as Welsh heritage choices go, Carys is far easier to wear than, say, Ceridwen.

If you’re looking for a name that feels modern without being completely invented, this is a great option.