The baby name Carson has become a traditional modern staple for a child, handsome and versatile.

Our Baby Name of the Day is for L.

Wilson means the son of Will; Jackson, the son of John. And so we’re tempted to deconstruct this name and arrive at Carr’s son.

Carr and Kerr exist as names in Scotland and northern England, possibly meaning marsh or fort or rock, or maybe even rough ground or spear.

So it’s possible that a handful of Carsons evolved from Carr and Kerr.

The more compelling argument connects the baby name Carson to Notre Dame de Courson in the Calvados region of France.

Members of the de Courson family invaded England with the rest of the Normans. Their surname became Curzon, which remains in use. But in some cases it was simplified further, to the very English Carson, possibly influenced by Carter and so many -son ending choices.

So what does de Courson/Curzon/Carson mean?

That’s tricky to pin down.

But the place name probably comes from Curtenus or Curtius, Roman names derived from curtus – short.

Perhaps that last meaning is a stretch. But the baby name Carson has traveled so many miles from its original form that they all seem equally likely.

Instead, the baby name Carson is defined by the many famous bearers.

Stories about him featured in the media even during his lifetime. Even in a pre-Instagram era, exaggeration ran rampant. But Kit truly did help win the West, serving as a guide to the US Army, helping to blaze the Oregon Trail.

The downside? Settlers and natives came into conflict. Later in his career, Kit served in the Union Army and led campaigns against the Apaches and the Navajo. It leads to a mixed legacy.

Kit’s name remains all over the lands that he traveled, including Carson City in Nevada, as well as the neighboring river, plus more towns, trails, and a national forest.

Fast-forward into the twentieth century, and there are even more famous figures with the name, real and fictional:

It’s been a feminine name along the way, too. Born Lula Carson McCullers, the famous Southern Gothic writer dropped her first name in favor of her family middle before publishing works like The Member of the Wedding and The Heart is a Lonely Hunter in the 1940s.

The baby name Carson has history to spare.

It sounds like the even-more popular surname names Carter and Jackson. If Carson didn’t exist, we might have invented if it.

The period drama pushed Edith and Marigold up the popularity charts, but gets no credit for the rise of Carson.

Instead, Philadelphia Eagles quarterback Carson Wentz might explain the name’s sharp rise in use.

The Eagles picked up Wentz in the 2016 draft; he was second overall. During his rookie season, the newcomer set all kinds of records. He helped his team start strong in the 2017 season. But when the Eagles won the Super Bowl in February of 2018, Wentz was on the sidelines with an injury.

Not that nearly 4,500 births represents a small number. As of 2019, the baby name Carson continues to chart at #82 – pretty much where the name has ranked since the beginning of the twenty-first century.

Alternate spellings abound, including Karson and Karsyn. Karsen, Carsen, and Carsyn are seen with some regularity, too.

Like so many surname names, it’s occasionally unisex, though the majority are boys. A few of the spelling variations – like Karsyn – do lean feminine.

The baby name Carson belongs with the twenty-first century staples: Logan, Ryan, and Dylan; Hunter, Carter, and Cooper; Wyatt and Everett; Miles and Cole. They’re surname in style, but not new. And while they’re trending – more popular today than ever before – there’s nothing trendy about these time-tested choices.

Handsome Carson also feels nicely flexible. It’s the name of an athlete or a frontiersman, a talk show host or a designer. There’s something shape-shifting about this name, a modern traditional that would serve a child well over a lifetime.

What do you think of Carson? 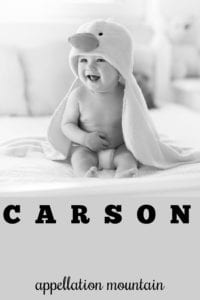