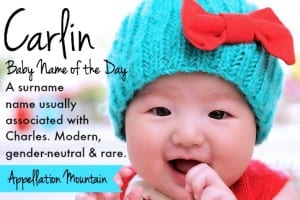 It’s a surname name with ties to the evergreen Charles.

Thanks to Emily for suggesting Carlin as our Baby Name of the Day.

There’s more than one origin for the surname:

File this one under pan-European possibilities.

Carlin: In the First Place

Or you could invent Carlin, from Carl, Carla, and Carly, just add -lin.

Carlyn, Karlyn, and Carlynn are almost exclusively used for girls. Carlyn and Karlyn peaked in the 1990s, but Carlynn’s highest year of use was 2014, when it was given to 24 girls.

Karlin is rare, but is evenly given to girls and boys.

It’s a longer history of use than you might expect. Famous bearers of the surname include:

As for first name uses:

There are handful of others, too, including an academic and a few male athletes.

The Carlin Gold Trend is one of the the world’s richest deposits of gold. It’s found in Nevada, and runs under a town called Carlin. It’s produced over 70 million ounces of gold in the twentieth and early twenty-first centuries.

Then there are Carlin Stones, found throughout Scotland. It’s not clear how the name evolved, but one guess ties it to the Gaelic word for a witch or a hag – Cailleach.

All of this makes Carlin an interesting possibility. It could serve as an unconventional way to honor a beloved Charles, or anyone with an associated name.

And while Carlin feels sleek and modern in some ways, it’s also interesting to note that most Carlins are teenagers – or older.

What do you think of Carlin? Do you like it better for a boy or a girl?