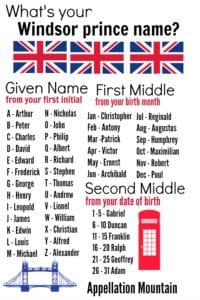 Let’s talk Cambridge prince names. Because sometime soon, William and Kate – that’s the Duke and Duchess of Cambridge, officially – will welcome their third child together. And we can’t wait to hear what they’ll choose for his name.

The royal couple stick to the traditional choices for their children – or at least they have so far. They’re already parents to George Alexander Louis and Charlotte Elizabeth Diana. We can pretty sure they’ll follow the same general rules when they name the newest prince or princess:

I think it’s somewhat unlikely that they’ll repeat any of their own children’s names, so I doubt we’ll have a Prince Louis or a Princess Elizabeth.

While compiling the girls’ list, I realized that Will and Kate don’t have many options. That means one of two things: first, we could very well know the baby’s name already. If they stick to their established pattern, their options are so limited that it’s easy to guess.

Or maybe – just maybe! – it means the couple will search slightly farther afield for a name that’s appropriate, but not quite as expected.

It’s said that Prince Charles, Will’s dad, liked this name quite a bit for his sons, but Diana dismissed it as too old. Times change, though, and Albert feels fresh once again. In fact, it’s a rising Top 100 name in England & Wales, along with nickname Albie. It’s impeccably royal, thanks to Prince Albert, the husband of Queen Victoria. It’s appeared in nearly every generation since then. In fact, Will’s brother, Prince Harry, is Henry Charles Albert David. All of this makes Albert one of the most promising picks on this list.

If not Albert, then Arthur seems like the most likely choice for a brother for George and Charlotte. It’s a still match, of course. But it’s also nicely royal. There’s never been a King Arthur – not counting the legendary one – but there was a Prince of Wales by the name. (Henry VIII’s older brother was Arthur.) Plus, the family seems to prefer mainstream favorites, which puts Top 50 Arthur solidly on the shortlist. 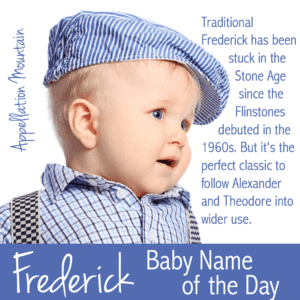 I’d love to hear a birth announcement for a little Prince Freddie! Again, this name checks plenty of boxes. It’s not in use by a member of the current generation, but feels nicely British and appropriately royal. Frederick is a favorite in England, just like George and Charlotte. And Freddie is actually a Top 20 pick. One reason I don’t think Frederick is more likely: it’s not clear how Will and Kate feel about nicknames. Because Frederick would immediately be Freddie to everyone. So perhaps that moves this name to the middles-only list.

James seems like a lock, a name that must be on the Cambridge’s shortlist. Except. As I mentioned earlier, Will’s Uncle Edward has a son named James. James was born in 2007, so even though he and Will are cousins, James is much closer in age to Charlotte and George. So that could easily drop James from likely first to possible middle. 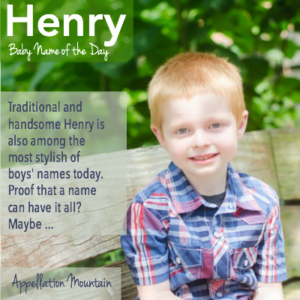 Henry feels impeccably regal – there have been eight kings by the name in Great Britain alone! – and yet stylish, too. It’s the obvious name for the royal family. And yet, it’s very much taken. That’s because it’s Prince Harry’s birth name. In many families, naming after an uncle would be considered an honor, but I suspect this family might see it as a source of confusion instead. (And when your names make headlines every week, that’s no small consideration.) Of course, Harry has never used his formal name, so maybe it is up for grabs.

We see Louis as royal. In France? That’s so very true. But it’s not quite as solidly to the purple born in England. Will’s full name is William Arthur Philip Louis, but the Louis was a nod to Prince Charles’ great-uncle, the late Lord Mountbatten, to whom he was quite close. Still, they’ve passed it on to George as his second middle, so it feels very House of Windsor these days. The problem? Well, they’ve already used it for George, and seem unlikely to repeat.

Things that baffle me: why classic Peter isn’t more popular throughout the English-speaking world. Peter does appear on the extended family trees of various royals. But it makes this list because Peter is also Kate’s grandfather, who once served as co-pilot to Will’s grandfather, Prince Philip. That strikes me as an appealing connection, and since Will’s family is so thoroughly honored with their first two children’s names, maybe it’s time for a little more Middleton history to influence their choice. 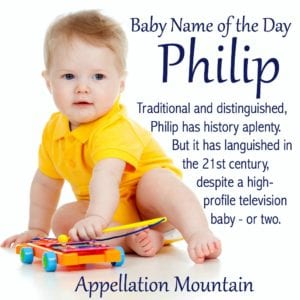 All this talk of Prince Philip brings us to his given name. Again, it’s quite royal elsewhere in Europe, but has mostly been a middle name in the UK. (Like William Arthur Philip Louis.) Still, that doesn’t rule it out – especially for a younger child, far less likely to ever succeed to the throne. Instead, I think Philip moves to the middle spot for another reason: it’s considered rather dated on both sides of the Atlantic, and the Cambridges seem to favor Top 100 names.

At first glance, Richard meets the criteria: worn by kings aplenty, but not in use in the current generation. But on closer inspection, I think Richard might be considered unusable. That’s because one of those kings is considered a villain. Shakespeare immortalized Richard III as a tyrant. While that may be unfair – or at least, not entirely accurate – the image stands. 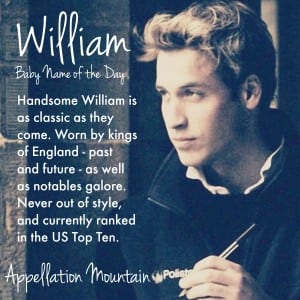 The British royals don’t do juniors. Sure, they may take the  name of their predecessors when they’re crowned king. But in regular life, they tend to avoid repetition. So that makes William a long-shot for a son. And yet, it ticks every other box – traditional, popular, accessible. It’s a name that never goes out of style. But I think I’ll save this one for my list of possible names for Prince George’s firstborn.

I’ve mentioned a few likely middles already, like Frederick and James. I also think William might be part of the prince’s full name.

But the name I’m watching most closely for a middle: Michael, as in Michael Middleton, father to Kate. After all, Charlotte’s middle honors Will’s mum. So it feels quite fair that a second son would receive Kate’s dad’s name as a middle. Michael also qualifies as royal-lite. It’s not found in the immediate British royal family, but follow a branch or two, and you’ll see it used as a middle and a first.

Others in this category: Christian and Patrick.

Or maybe they’ll use David as a middle name. It was the preferred name of King Edward VIII, born Edward Albert Christian George Andrew Patrick David, but always known to friends and family by the last of those names. Since Edward VIII abdicated to marry Wallis Simpson, it might carry some baggage. But as a middle name, I think it works. And Prince Harry is Henry Charles Albert David, so it’s been used since then.

If the newest royal baby is a boy, I’m betting Michael will be among the middles. And the first name almost has to be Albert or Arthur.

I’m tempted to bet on Albert Michael Philip, though the rhythm of three two-syllable names in a row seems a little choppy. That makes me ponder something like Albert James Michael, or maybe Arthur Henry Michael.

With another couple, I might have guessed Arthur Leopold Michael, or Arthur Leopold James. But Will and Kate seem to favor names that read as thoroughly British, so that makes me think Leopold might be saved for Meghan and Harry.

What do you think? Have I overlooked an obvious combination – or a possible name entirely? Let’s hear your best guesses for Cambridge prince names!