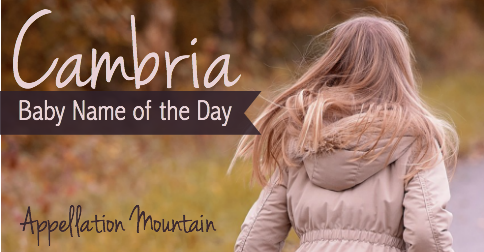 New names month continues with this poetic place name as our Baby Name of the Day.

In Welsh, Cymru is the name of Wales, from the word cymry – the people, possibly from an even older word that meant countrymen. Cambria is the Latinized form of the name.

That’s pretty straightforward, but there’s another story about how Cambria came to be.

Geoffrey of Monmouth told us that it is named for Camber, the youngest son of Brutus of Troy, the conqueror and first king of Britain. But Brutus and Camber are the stuff of legend, so that’s probably not the source.

Plenty of places are named Cambria, all across the United States and throughout the English-speaking world.

There’s one more place on the map that shares the name. Or at least, it used to be on the map. I’ve heard that part of Sicily was once known as Cambria, and that’s the reason why this name is sometimes heard as a surname.

Except that it no longer seems to exist, save as a winery which lists its address as Furnari, Italy. And, of course, as a surname. 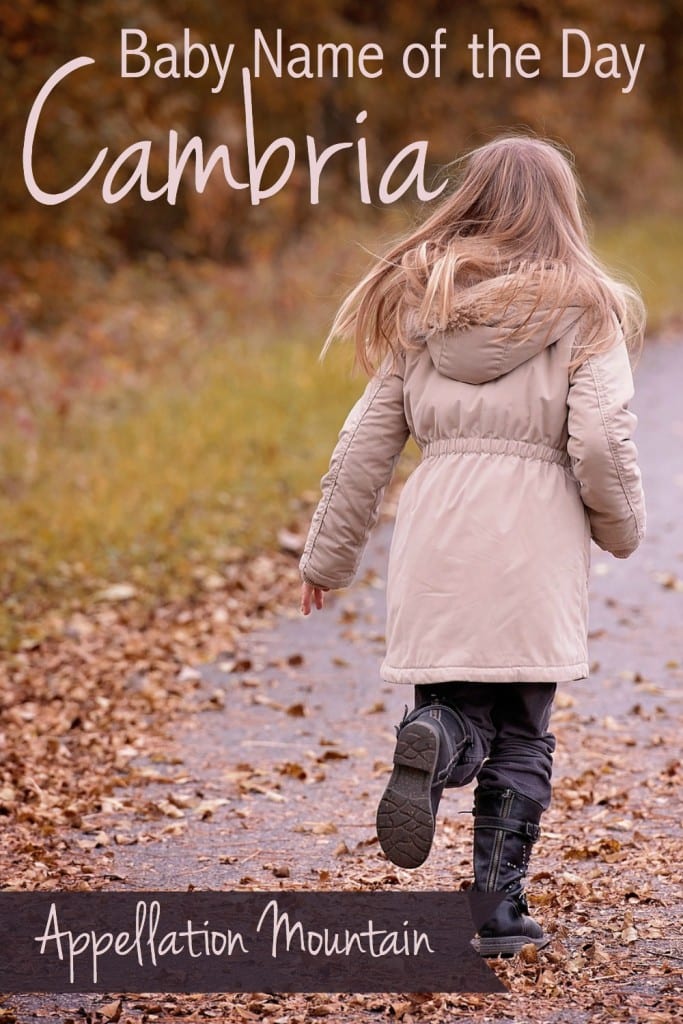 Cambrian also refers to a geological time period, a time during which many species evolved rapidly, becoming more complex and diverse. It’s known as the “Cambrian explosion” and the name comes from Wales, where early geologist Adam Sedgwick first studied fossils in the rock in the 1800s. (Charles Darwin was one of his students.)

It’s thanks to this association that Cambria is sometimes given a more poetic meaning related to life. While the connection is legitimate, it’s perhaps a bit of a stretch from an etymological perspective.

Cambria: By the Numbers

1963 is the first year that Cambria appears in the US Social Security records. Six girls were given the name.

What prompted the debut?

Perhaps credit goes to the USS Cambria, a World War II attack transport that was still in service during the Cuban Missile Crisis in late 1962. While it seems  like a strange source of inspiration, the timing fits.

It would also explain why the name quickly faded, disappearing from the rankings until 1967. It has been given to a steadily increasing number of girls in the years since.

A few more guesses as to why the name has succeeded:

Or could Cambria simply succeed on sound?

It almost sounds like a mash-up of current favorites:

Overall, this makes Cambria a name that feels interesting and accessible, while still distinctively different.

Would you consider this name for a daughter? Do you think it will catch on in the next decade, or remain rare?