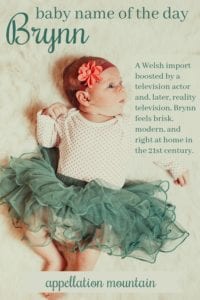 Thanks to C. for suggesting our Baby Name of the Day.

Bryn simply means hill in Welsh. It’s heard in a few place names in Wales and elsewhere. And it’s also a given name, one that started out masculine.

In fact, Bryn – with a single ‘n’ – remains fairly common in Wales, appearing in the combined England & Wales Top 500 until just the last few years.

You can still visit Bryn Myrddin, or Merlin’s Hill, said to be the home of the legendary wizard. Or make that prison. After Merlin taught his craft to the Lady of the Lake, she trapped him in the hill.

Americans might think first of Bryn Mawr, the college outside of Philadelphia. The name translates to “large hill.” It came from the surrounding town, which, in turn, was named for the estate of Rowland Ellis. A Quaker, Ellis emigrated to the US to escape religious persecution, settling outside of Philadelphia with other Welsh Quakers. Eventually the land they settled took the name of Ellis’ former home.

The college gives us the first reason Brynn leans feminine in the US. The school is one of the Seven Sisters, a women’s college first established in 1865, at a time when higher learning was not readily available to women. Could it be that this powerful association colored how we hear the name?

You might hear this as a surname, also spelled Bryn and Brin.

With the ‘y’, odds are that it’s still the Welsh word.

But Brin carries a host of associations. It’s the Yiddish name for the city of Brno, in the Czech Republic, and so it might be given to those who lived there.

Or maybe it’s from an Old French word meaning noise, which would make this a nickname for a certain type of person. Dutch and Norwegian tie-ins are possible, too, and a Norman conqueror brought some version of the name to England.

This name might have remained a seldom-heard import, if not for actor Brynn Thayer.

In 1978, she got her big break, as Jenny Wolek on ABC’s One Life to Live. She earned accolades for her work, and eventually graduated to prime-time television in the 1980s. By 1992, she became a cast member on successful legal drama Matlock.

Brynn: By the Numbers

Thayer’s career tracks with the data.

It was used in very small numbers from the 1940s into the 70s, mostly for girls, but sometimes for boys. In 1980, it debuted in the girls’ Top 1000, just two years after Thayer took on her soap opera role

Lynn and Lynne had peaked for girls about twenty years earlier, and remained in heavy use. So doubtless it sounded like a Brenda-Lynn mash-up to contemporary parents. (Brenda also ranked in the Top 20 during the mid-1950s.)

But there’s a twist: while Brynn spent the 1980s in the Top 1000, it never quite caught on. Instead, the name slowly declined in use, even while Ms. Thayer remained in the spotlight.

Or maybe Br- had become a favorite sound. After all, Brittany, Brianna, and Brooke were all Top 50 names in the late 1990s.

Either way, it was inching its way back up the charts when reality television struck. MTV’s The Real World set season twelve in Las Vegas, and one of its cast members was 21-year-old Brynn Smith.

Rebel Wilson wore the name in the 2011 movie Bridesmaids, and another reality series included a cast member with the name, a young dancer on Lifetime’s Dance Moms.

All of this makes Brynn a stands-out/fits-in choice. It’s never been so popular that it feels tied to a specific decade. In fact, plenty of us may have never met a Brynn in real life.

Would you consider this name for a daughter? Do you prefer it spelled with one ‘n’ or two?