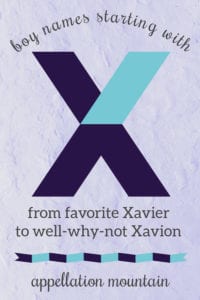 Boy names starting with X constitute a very exclusive club. Just three X boy names rank in the current Top 1000. And while some gems fall outside the most popular list, this is a tough letter.

And some of these substitute X for Z. Then again, plenty of Z names swap an X for a Z, too. For every Xane, there’s a Zavier.

X ranks 24th out of the 26 letters of the alphabet in terms of popularity. Only Q and U are less popular as first initials. But somehow it seems more mainstream than that, possibly because we hear the sound so much – just in Maxwell and Felix and okay, sometimes Xavier. That makes it feel more popular than the data suggest.

Of course, X’s appeal is visual, too. Not every name on this list actually sounds like “ex” or even z.

Read on for the best of the boy names starting with X.

MOST POPULAR X NAMES FOR BOYS

A priestly surname name, St. Francis Xavier inspired parents beginning in the twentieth century. But the name really caught on following the 1980s Cabbage Patch Kid craze. After all, the inventor of the boldly named baby dolls had a (then) seldom heard name himself: Xavier Roberts. But it’s the rise of Professor X – Charles Francis Xavier, the brilliant X-Men character, introduced in 1963 – who many will think of first.

If William can shorten to Liam, can’t Alexander shorten to Xander, too? Of course. And ever since we met Xander Harris on 90s pop culture sensation Buffy the Vampire Slayer, it’s been a rising favorite with families.

One of the big debates around Xzavier is pronunciation. Is it three syllables or two? Xzavier attempts to phonetically insist on three, thank you very much.

Most likely pronounced just like Zayden, a Top 200 name in the US, Xaiden also looks a little like a nod to Xaiver.

Like Xander, Xan comes from Alexander. Though, in some languages, it can also come close to Jan and the classic John.

An X-twist on Zane, a name with multiple origins and stories.

It looks like a cousin to Jared, but Xareed is a Somali name meaning rain.

Like Jake from Jacob or Nate from Nathan, Xave can stand apart from Xavier, too.

A Xavier-Gabriel mash-up with potential.

Dancer-choreographer Savion Glover put his unusual name on the map. Xavion is an even rarer spin.

The name of a fifth century king of Persia, and many named in his honor, Xerxes means “ruling over heroes.”

The Germanic Guiomar is masculine in Arthurian legend, but feminine in modern-day Spanish and Portuguese. Swap the G for an X, and you’ll arrive at Xiomar instead.

In a handful of languages, X often substitutes for J. Or other letters. Galician gives us Xoel – Joel – while Basque gives us Xarles – Charles. Not all of them import smoothly into English, but Xoel – a sort of midpoint between soul and Joel – might.

Xolani looks like popular Hawaiian names for girls – Leilani, for one – but it is used in South Africa. I’ve seen it listed as both Zulu and Xhosa, with an appealing meaning: peace.

While it’s tempting to pronounce Xue like “zoo,” this Chinese name sounds more like shweh. It’s also a surname. The meaning depends on the exact characters used to write it, but one commonly listed is snow.

What are your favorite X names for boys? What would you add to this list? 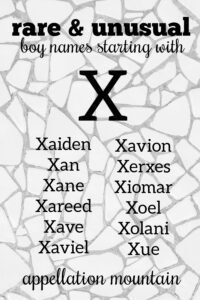 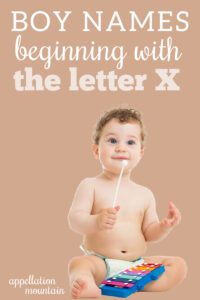