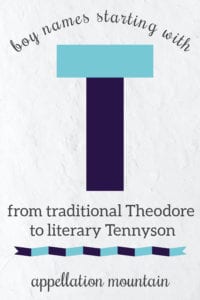 Traditional T names come to mind quickly. A century ago, Thomas and Theodore ranked in the US Top 100. They’re still there today – though Theodore is recently returned.

A turn-of-the-century favorite, Theodore brings to mind men of accomplishment, from Roosevelt to Dreiser. Plenty of Teds are Theodores, too, but today, Theodore is likely to be Theo – as in Huxtable, from 1980s staple The Cosby Show. (Back then, the name languished in near-obscurity.) Only in the last dozen years has Theodore gone from neglected classic to everybody’s favorite traditional name for a son.

A rock-solid traditional pick for a boy, Thomas has never left the US Top 100. In fact, it’s only occasionally dipped outside of the Top 50. Tom sounds modest and capable, a name equally old-fashioned and at-home in the modern world. Famous Toms include Sawyer and Hanks, Petty and Holland, Brady and Clancy. And, of course, Thomas Paine, Jefferson, and Edison are just a few notables we know best by the formal name.

Thiago comes from Santiago, which is the Spanish for Saint James. It’s a high energy choice, far more surprising than any of the more traditional forms of the name, bolstered by that bright ‘o’ ending. That said, Thiago isn’t quite a crossover choice, the way that Mateo and Leo might be. Thiago is specifically the Brazilian Portuguese form of the name, and seems less likely to be used by families without roots in Latin America.

Tucker is among the many -r ending surname names to follow Tyler up the popularity charts. A Tucker worked with cloth. It’s a common surname, and it’s been used as a first over the years. But Tucker really started to rise in the late 1970s and 80s. It sounds preppy and polished, but still accessible.

A companion to Saint Paul in the New Testament, Timothy means “honoring God.” But in an age of Elijah, Isaac, and Levi, Timothy feels more like a mainstream favorite than a specifically spiritual name. A Top 20 favorite from the 1950s and 60s, Timothy feels gentle and traditional. While it’s less popular today than it was in the past, that doesn’t change Timothy’s status as a classic among boy names starting with T.

Originally a nickname name for a third, Tripp has lately emerged as a stand-alone name, entering the US Top 1000 in 2008.

Thayer is really just another form of Taylor – one who made clothing. But the Th is just slightly different, and it updates this surname name nicely, borrowing a little bit of Theodore’s sound for an unexpected surname choice.

S. Truett Cathy founded the Chick-fil-A restaurant chain, which might make this name familiar. But it’s appealing because of that first syllable – the virtuous True. 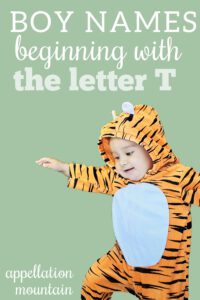 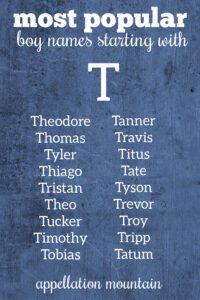 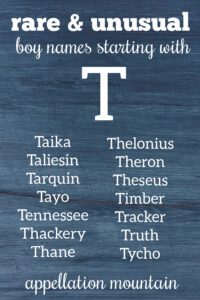